Ometepe, Nicaragua, an island in the middle of Lake Ometepe, has a certain magic to it. For starters, there are two volcanos on either end of the island, which makes the ferry ride  pretty spectacular. Or maybe it’s the dirt roads, covered in ATV’s, dirt bikes and scooters. It also has natural springs that are said to have healing properties; whether or not you buy that, they’re a refreshing way to escape the oppressive heat of the dry season.

We were coming from Granada, which made it a pretty straightforward journey. There is a 9:30am chicken bus (directions to where it leaves can be found here) that will take you to Rivas for 50 NIO ($1.60 US). We arrived 20 minutes before the bus left and were glad we did, because it ended up being completely full and left a few minutes early (as these buses sometimes do once they’re full). The trip was about 2.5 hours and dropped us at the terminal in Rivas where dozens of cab drivers were only too happy to take our money for the short drive to San Jorge where the ferry departs. We buddied up with another couple to share the cab fare, which was 200 NIO for four of us – hard to believe the 10 minute taxi ride was the same price as the long bus ride, but it’s usually the case in Central America.

Once at the ferry terminal in Moyogalpa, there will be multiple people pointing out where to buy tickets. We were wary at first; if you buy the tickets before boarding are they more expensive? Are we being ripped off in some way? While we did see people also buying tickets on board, they were charged the same amount so you can purchase wherever you prefer. On the other end, there will be taxis waiting to transport you to other areas of the island. Since we were staying in town that night, we just walked to our hostel.

Where to Stay on Ometepe

This refers not just to hotel/hostel, but also where on the island and the answer depends on what you want to do! Are you interested in hiking Volcan Concepcion? Then staying in Moyogalpa is a good idea. Do you want to spend time at the beach? Then Punta Jesus Maria or Santo Domingo would be good options. Or if you want to get away from it all and just relax, perhaps San Ramon. We decided to split our time, spending one night in Moyogalpa to hike Concepcion, and the other three nights in San Ramon off the beaten track.

James found a hostel in town (Hostel Los Abuelos), close enough to the ferry terminal to walk with a private room and private bathroom for $20 US per night. Our room had 4 beds (presumably you could book it for a group), a shared fridge just outside the room and there was also a shared kitchen for those wanting to make their own meals.

For the remaining 3 nights, we stayed on the other side of the island in San Ramon which is only accessible by dirt roads full of pot holes (can you call a human-sized hole in the road a pothole?). We stayed at Finca Mystica which we both loved! The room was really nice, there were hammocks around for relaxing and the food was some of the best we had in Central America. Accommodation was $135 US for three nights and we spent $75 US on meals (we had most of our meals there over the three days and would generally share one lunch and one dinner). This required a private transfer in a 4×4 for $30 US (each way). You could also rent a motorbike or scooter in Moyogalpa and drive yourself, but given the conditions of the roads this might be a bit of a challenge (we met another traveller who fell off his scooter with his bag on the drive over and couldn’t walk for days).

What to do on Ometepe

The number one thing to do on the island is climb one of the two volcanos, but this is not for the fainthearted!  There are two options; Concepcion & Maderas. Concepcion is the taller of the two, but it doesn’t necessarily mean it’s a harder hike. It is steep, particularly the last half of the summit, and involves a bit of scrambling up loose rock and eventually volcanic rock (which is equally challenging coming down). There is a lookout halfway up, and some decide to turn around at this point. We were keen to get to the top and, though we definitely felt a sense of accomplishment, there were no views to be had just lots of swirling smoke going into our eyes and noses! Maderas, by comparison (and from what I understand by reading about it) may not be quite as steep but it is incredibly wet which can mean hiking in ankle-deep mud. We made our decision based on that alone. We booked our tour through Papagayo Hostel, which offered the most competitive rates ($20 US for transportation and a guide) and had a small group of 4.

To read about our experience climbing Concepcion, click here.

Ometepe is a fun place to explore and you will see most tourists getting around by ATV, motorbike, scooter or bicycle. Though the ATVs are probably the best equipped for the terrible roads, they are also the most expensive (we saw some advertised for $80 US per day). We had chatted with a few people before arriving who recommended a motorcycle, but since neither James nor I know how to drive one we ended up going for a scooter. It was not the best equipped for the roads, but we got around fine and didn’t have any crashes/wipeouts.

We chose to rent a scooter for one day from Finca Mystica which was $30 US. We spent an afternoon driving around the island (though it took quite some time from Finca Mystica to get to the main road), visiting Ojo de Agua and grabbing some vegan ice cream at el pital. It was a lot of fun, but one day was more than enough; the roads are too terrible to warrant wanting to take it out more than that!

Cool off in Ojo de Agua 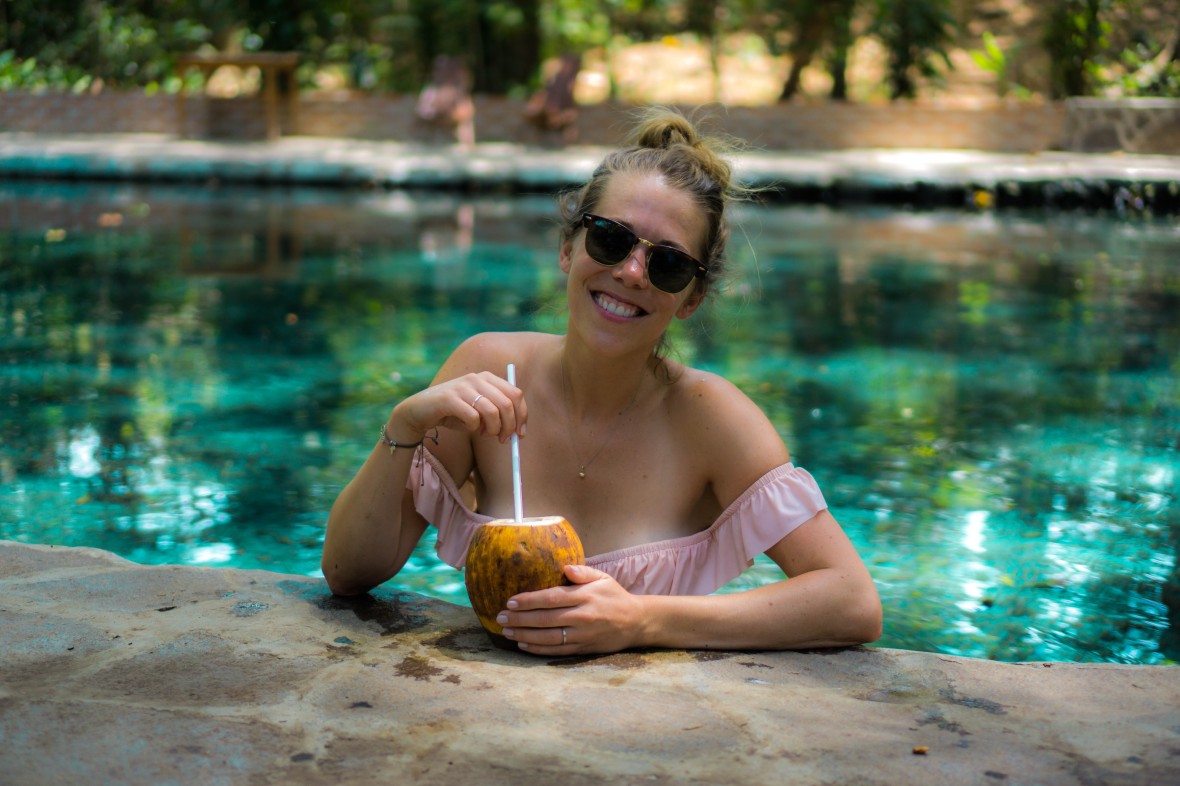 The day we had our scooter, we headed to Ojo de Agua ready to soak our sore muscles from the Concepcion Climb the day before. We arrived mid-morning, paid the $5 US entry fee per person, and found a quiet spot beside the pool. It wasn’t very busy, which was nice, and we spent a few hours swimming, reading and cooling off. There was a man selling coconuts which you could have on its own, or with some rum ($3 US). After we finished our drinks, we took the coconuts back and he cut and peeled them so we could eat the flesh; it was delicious!

Swim under a waterfall One of the major attractions on the island is the San Ramon waterfall, which we were able to hike to right from Finca Mystica. It was about 40 minutes to get to the gate, and then another hour and 15 minutes to the waterfall.

There are many ways to get to this waterfall; Finca Mystica also offered horseback riding which could take you the majority of the way, leaving you to hike the final 15 minutes, and a few people took this option. You could also drive most of the way, leaving a half hour hike to the waterfall. People with scooters did manage to make it to this point,  though we did see some couples with one person walking and the other driving the scooter because there wasn’t enough power to get them both up the hills.

The hike itself wasn’t bad, though it was hot and there was very little shade for the majority of our walk. We left Finca Mystica a little before 9:00am, but if I were to do it again I would leave earlier in hopes of hiking in slightly cooler temperatures. When we arrived at the waterfall around 10:45 it wasn’t particularly busy, but as we made our way down there were a lot more people coming.

Ometepe is one of the most unique places we visited, with a ton to offer for a variety of travelers. It’s a must-see when visiting Nicaragua and we can’t wait to come back one day.