We arrived in Broome midday and headed to our hotel for the night: Beaches of Broome. We were about an hour early for check-in, and they basically turned us away without even checking if our room was ready, simply saying ‘No, come back at 2’. No matter – we had a cooler bag of snacks and Cable Beach was only 5 minutes away. We made some sammies and enjoyed the sun (from the safety of the shade and with SPF50) before making our way back to Beaches.

After check-in, we decided to head ‘into town’, which we were able to cover in about 10 minutes! But we got some gelato and a bottle of wine for later, so that was alright. Shortly after, we made our way down to Cable Beach, where with a 4WD vehicle you can go right onto the beach. There were probably 100 SUV’s, trucks, etc. already down at the beach so we picked a spot to park for camel watching and to see the sunset. We had a glass of wine, watched the sun go down and (of course) flew the drone around a bit. It was Robin’s last night in WA so we decided to head to Cable Beach Sunset Grill for some dinner before an early night – we were on a tour with a 5am pickup the next day!

We woke up, said our goodbyes to Robin who was flying out that afternoon and headed down to the curb for pickup. We were going on the Horizontal Falls Seaplane Adventure Tour and we were pretty stoked (or frothing? I think that’s the right use of the Australian term). We walked onto the bus and quickly realized we were all at least 30 years younger than the next youngest passenger. The tour was our big splurge for the trip, so I suppose we shouldn’t have been surprised! And 60+ year olds have the best jokes anyway.

After a 10 minute drive, we arrived at the hangar and met our pilot for the day, Henry. We got our life jackets and Henry asked if anyone wanted to be the Co-Pilot. James put up his hand and was selected, which meant that Katie, Jeff and I were in the second row. Not bad! The seaplane held 12 people altogether. An hour in the air and we were ready to land, but not before a few circles around the Horizontal Falls to get a great view.

The landing on the seaplane was super smooth (it was my first time on one). We boarded the hotel boat and moved upstairs for some tea. It was only 7:45am and we’d already had a great morning! By 8am we were on the speedboat heading over to Horizontal Falls. There are two gaps – wide and narrow – and the company can only take the boat through the narrow gap during low tide when there is 1m or less drop. I remember looking down at them from the air and thinking ‘Oh, there’s not much movement so it’ll probably be pretty boring going through’. I was so wrong! The falls were a blast, especially in the speedboat and there were definitely a few screams / woo’s from Katie and I! And to make it even more exciting, we saw a crocodile floating around in the water. An animal that I’d never given much thought to before coming to Australia, I am now much more aware of how deadly they can be and was pretty happy to be in a speedboat 😉 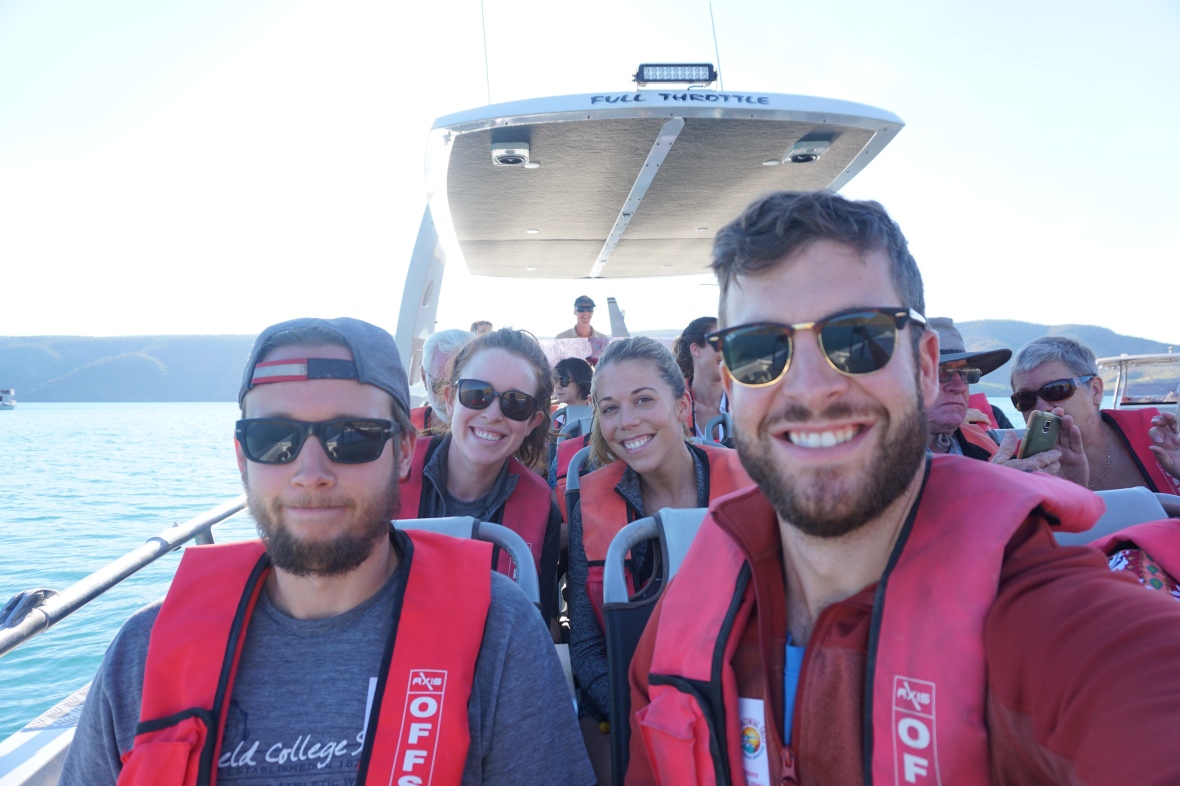 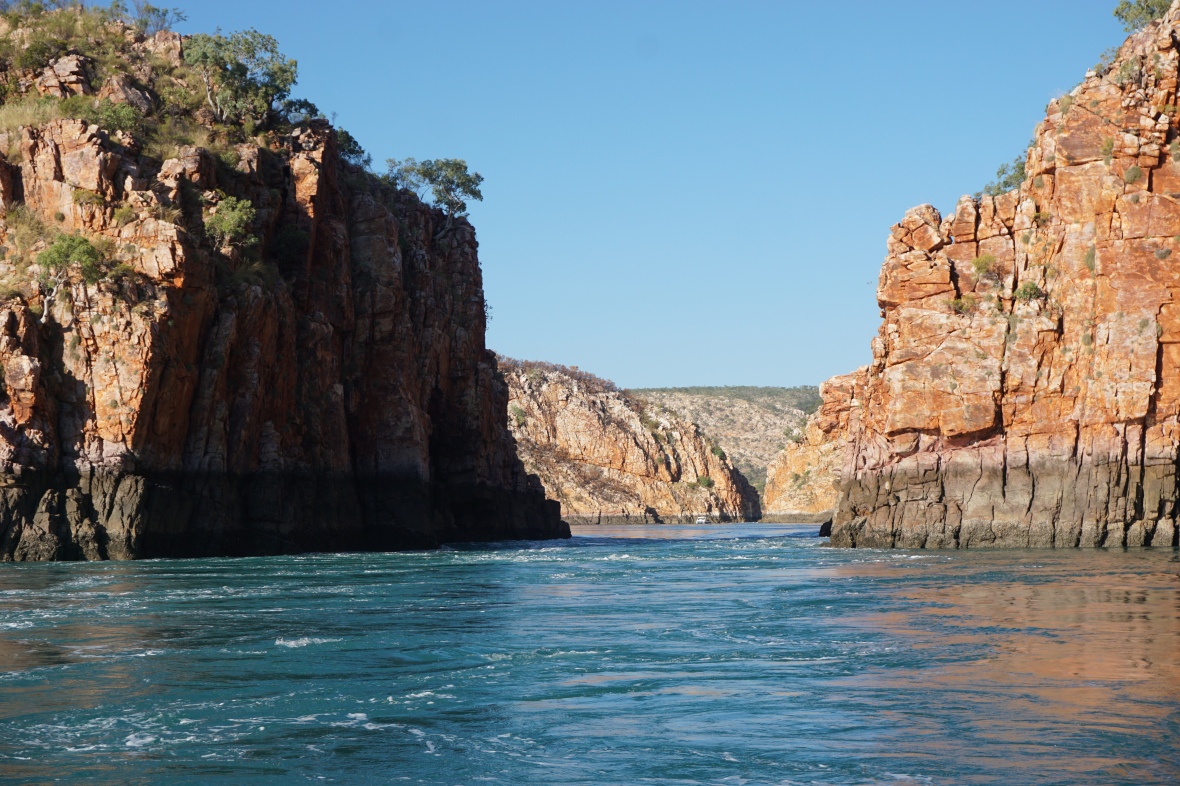 We hopped back on the hotel boat and grabbed some breaky, and James had an opportunity to take the drone for a spin while there weren’t any seaplanes coming in and out. All was going pretty smoothly until one of the crew spotted an eagle circling and called out ‘Hey Mate, that eagle is coming for your drone!’. The talons came out as the eagle swooped and it was a near-miss, but the drone was safely back on the boat within minutes.

We headed back out on the speedboat to get one last look at the falls and then take a cruise around Cyclone Bay and the adjoining creek. Only an hour later it was amazing to see the difference in the narrow gap of the horizontal falls – it was now at least a 2m drop and the water was a lot more active! Our guide let us know that when they are like this, they cannot safely take the speedboat through.

We headed to Cyclone Bay, which has a counter-intuitive name as it’s actually the place they store the hotel and other pontoon boats during wet season for protection. This area has the second highest tides (after Nova Scotia!). The light green is as high as the water gets in wet season, which can reach over 10m higher than dry season (the highest recorded at Bay of Fundy is 15m). The scenery was magnificent as we cruised around, gorgeous limestone and red rock. And we even saw a few more crocs!

Before too long, we were back on the boat and about to board the seaplane for our second half of the day. Jeff was co-pilot this time, as we headed to One Arm Point to meet up with our 4×4 and continue the day.

We headed to trochus hatchery and walked through a working aquaculture centre where we saw some fish we had seen before and were introduced to a few new ones, like the Archer Fish that spit at their prey out of the water to knock them down. It was quite amazing to see! Soon we were on our 4×4 heading to Cape Leveque for lunch and not a minute too soon as we were getting hungry! We feasted on grilled Barramundi, salad and chips and then took a swim down at the beach. The red cliffs there were incredible!

By then it was 2pm, and the remainder of the tour is a 2.5-3 hour drive back to Broome on some pretty bumpy dirt roads, so not much to report there! We arrived back around 5:30 and made our way to the Mantra Frangipani where we were staying until flying out.

The next day we took it pretty easy, had a bit of a sleep-in and headed to the beach for a workout. The afternoon was also perfect beach weather so we headed back down to spend a few hours under the umbrellas and incredibly comfortable chairs (which we rented for $25).

Monday was much the same to be honest! I think we were all just really happy to be in one place long enough that we had time to catch up on emails, get some exercise and do some laundry! But that night we headed to Astro Tours  to do a bit of star gazing and learn around the Southern Hemisphere’s night sky (which we’d all been looking at for nearly 3 years!). Greg, who walked us through the evening, was fantastic and not only taught us a thing or two but also gave a new perspective on how we talk about the earth in ‘flat language’ despite knowing that the earth is round. For instance, it’s common for people to say they are going to watch the sun go down, when in fact the sun isn’t moving and the earth is just moving away from the sun. He spoke a lot about ‘planetary awareness’, and how by spending just a few minutes outside every night we can all become a lot more aware of how our planet is moving in relation to the sun, other plants, or even other galaxies. He had several telescopes set up where we looked at some star clusters, Saturn, Jupiter and at the end of the evening a close look at the moon (which was really bright that night!).

Finally, we reached our last day in WA (sad face). We woke up a little later (the Astro Tour had us home after 10 which was the latest night of the entire trip!) and had a workout before heading to the beach mid-morning where we spent much of the day. After lunch, we went to Gantheaume Point in hopes of seeing some dinosaur footprints, despite the low tide still being quite high. We didn’t see the prints, but the scenery was beautiful and we stayed there for a bit before heading back to Cable Beach for a final few hours of sunshine.

We dropped Katie and Jeff at the airport for their flight (luckily the goodbyes were easy since we were seeing them in Melbourne for dinner the next day!) and went to the beach to catch our last sunset.

Australia is an amazing country. I’ll definitely go back and document some of our other favourite places, but Western Australia really blew us away. The red rock (and dirt roads!), brilliant blue waters, white sandy beaches – it’s a beautiful place and we can’t wait to come back. But for now, it was time to pack our bags for our last night in Melbourne before saying goodbye and heading to Mexico!

One thought on “Australia: Broome, WA”