Before going gorilla tracking in Uganda, we had one day in Kigali. Since we arrived quite late (2am) and slept in, this basically lead to one afternoon! Not nearly enough time to see the city’s sights, but we did go to what is likely the most important place in Kigali – the Genocide Memorial.
Prior to travelling to Rwanda, I didn’t know much about the genocide. I knew many people were killed, but didn’t know the reason or fully comprehend how horrendous this event in history was. I was never taught about it in history class, the same way I was about the holocaust (because of it’s part in WWII, which would have been part of our curriculum in Canada). Visiting the memorial was eye opening to say the very least!

We walked to the memorial from Hotel 2000, where we were staying. Despite being 1.4kms away (as the bird flies) it was a windy 4kms, which was totally fine. It was cloudy, and a welcome respite from the heat of Zanzibar. 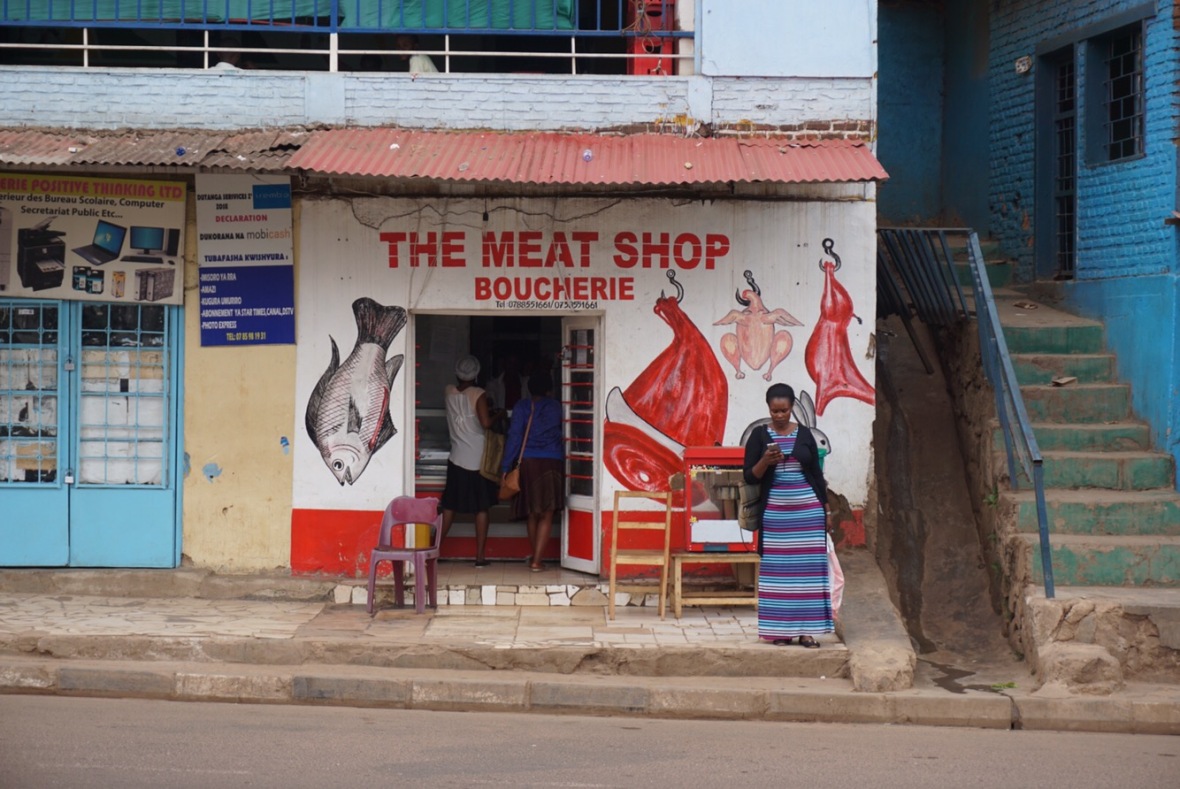 We arrived at the memorial and headed to reception where we were given some information about the different areas and the best way to see them. The admission is free, though there is an optional audio tour for $15 USD.

We were ushered into a room to watch a short film, which showed three people describing their experience during the genocide. Explaining how neighbours and family members turned against each other, how they watched parents and siblings get brutally murdered, how they managed to escape. I was already feeling pretty overwhelmed with emotion and we hadn’t even entered the museum yet!

We left that room and walked through a courtyard into the museum which explains the history of the genocide.

Below I’ve outlined what I learned from the museum as well as reading other sources online. Apologies if there are any inaccuracies; I would strongly recommend people to read up on this dark period of Rwanda’s history on their own as well; there is a lot missing from the below including when the tension between these groups began and why. I am currently reading ‘Handshake with the Devil’ by Romeo Dallaire which is his account of the genocide. It’s fantastic and I’d recommend it to anyone interested in learning more. Alright, on with my shoddy history lesson.

Prior to the events in 1994, Rwanda was a country divided. After it’s independence in 1962, the Hutu majority came into power and the President put rules and regulations in place against the minority Tutsi limiting their opportunities for education and work. As a result, many Tutsi people were displaced and became refugees. There was constant conflict between the Hutu-led government and the RPF (Rwandan Patriotic Front) which consisted largely of Tutsi refugees and from the period from 1972-1990 many Tutsi were killed.

In 1990 5,000 armed RPF soldiers invaded Rwanda which sparked President Habyarimana to ask for foreign support from France and Belgium. This appeared to make things worse; at the promise of foreign support the Rwandan army went on a rampage against the Tutsis, causing thousands of deaths and more Tutsis fleeing to other countries.

International pressure on the Hutu government of Habyarimana led to a cease fire in 1993 and a plan for the ‘Arusha Accords’ which would implement a power-sharing agreement with the RPF. Things were beginning to look up for Rwanda, though this agreement was not acceptable to a number of Hutu.

On April 6, 1994 an airplane carrying Habyarimana was shot down and he was killed. This was a signal to Hutu extremists to begin their work. Leading up to the death of Habyarimana (which is speculated to be caused by Hutu extremists), the ‘Hutu Power’ ideology was spread through radio, portraying the RFP as an alien force who were non-Christian; intent on reinstating a Tutsi monarchy and enslaving Hutus. ‘Hutu Power’ was all about ethnic cleansing, and Hutu extremists were quick to turn against their Tutsi neighbours and friends to meet this ideology. Soldiers, police and militia began with executing key Tutsi political leaders before killing civilians. A key player was the cabinet chief of military defence, Colonel Theoneste Bagosora who was responsible for the training the Interahamwe for more than one year leading up to the genocide.

Checkpoints and barricades were put in place, and ID cards which showed ethnicity (something which was introduced by the Belgian government in 1933) were checked. Tutsi people were shot, beaten to death or hacked with machetes and left on the streets. Hutu civilians were also involved in the murders of Tutsi. The UN was present with UNAMIR (United Nations Assistance Mission for Rwanda), but with the killing of 10 Belgian Peacekeepers Belgium pulled their support and withdrew all their troops. UN force commander (and Canadian) Lieutenant General Romeo Dallaire pleaded with the UN for more support, but to no avail.

After 100 days of mass killings, the RPF finally succeeded in pushing the Rwandan army and Interahamwe into the DRC and Burundi. By that time, it is estimated that close to 1 million people had been killed with another 2 million pushed out of the country into refugee camps. The UN finally listened to Dallaire and sent reinforcement in July, but by then it was too little too late.

With the RPF now in power, a legal commission was set up in Arusha to try those accused of involvement in the genocide. Of course, by that time many had fled the country or even the continent. To this day, there are instances of war criminals being sent back to Rwanda for sentencing.

After getting a thorough history in the museum, we visited other areas including the children’s room which shows images of children who were killed, along with some information – their age, their favourite toy, their favourite activity. It’s haunting to say the least, and a reminder that the impact of the genocide stretched well beyond grown adults. 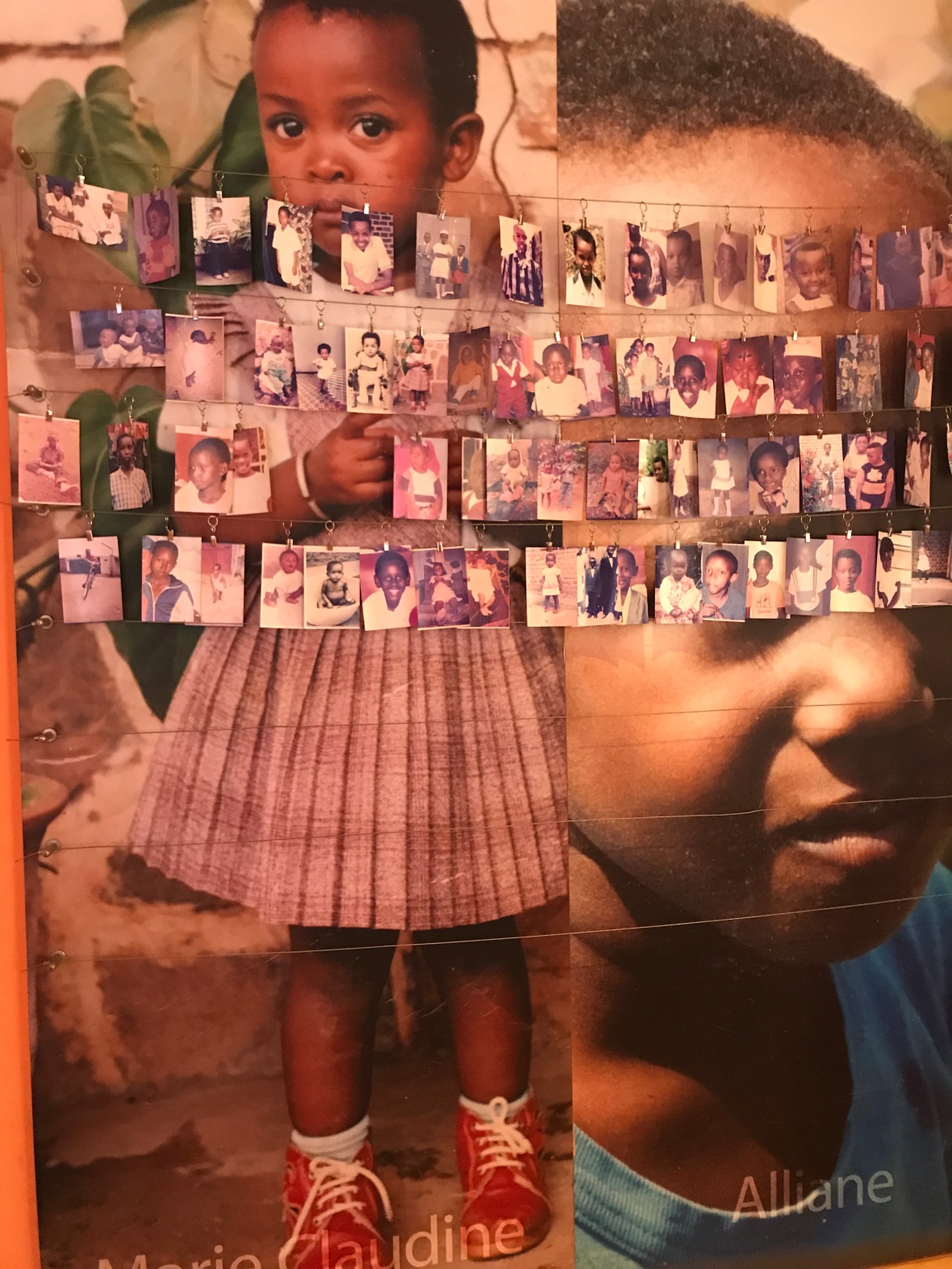 Finally, we visited the rose garden and the grave sites where more than 250,000 Tutsi men, women and children are buried in 3 large grave sites. In 2004 when the memorial was built, many of the bodies were sent to Kigali and it serves as a place for those left behind to visit their friends, family and loved ones.

As we walked around Kigali, the one thought that was inescapable to James and I is that everyone we passed who is our age experienced and will clearly remember the genocide. 80% of Rwandans lost at least one family member, and of those the majority would have lost many more family members, friends and loved ones. We were amazed at just how positive, kind and warm all the people we spoke with are. To have lived though such a horrendous event, and have such optimism about the future is truly awe inspiring.

We easily spent a few hours at the memorial – it’s not something to be rushed. We decided to find somewhere to eat and grabbed two motos to take us back to the city centre for $1 USD each.

We decided on Simba restaurant, conveniently attached to a supermarket, because it looked really busy. The food was pretty good, and the value for money was fantastic at about $5 USD for a massive plate of meat, rice, vegetables and fries. Needless to say, we didn’t eat dinner that night! 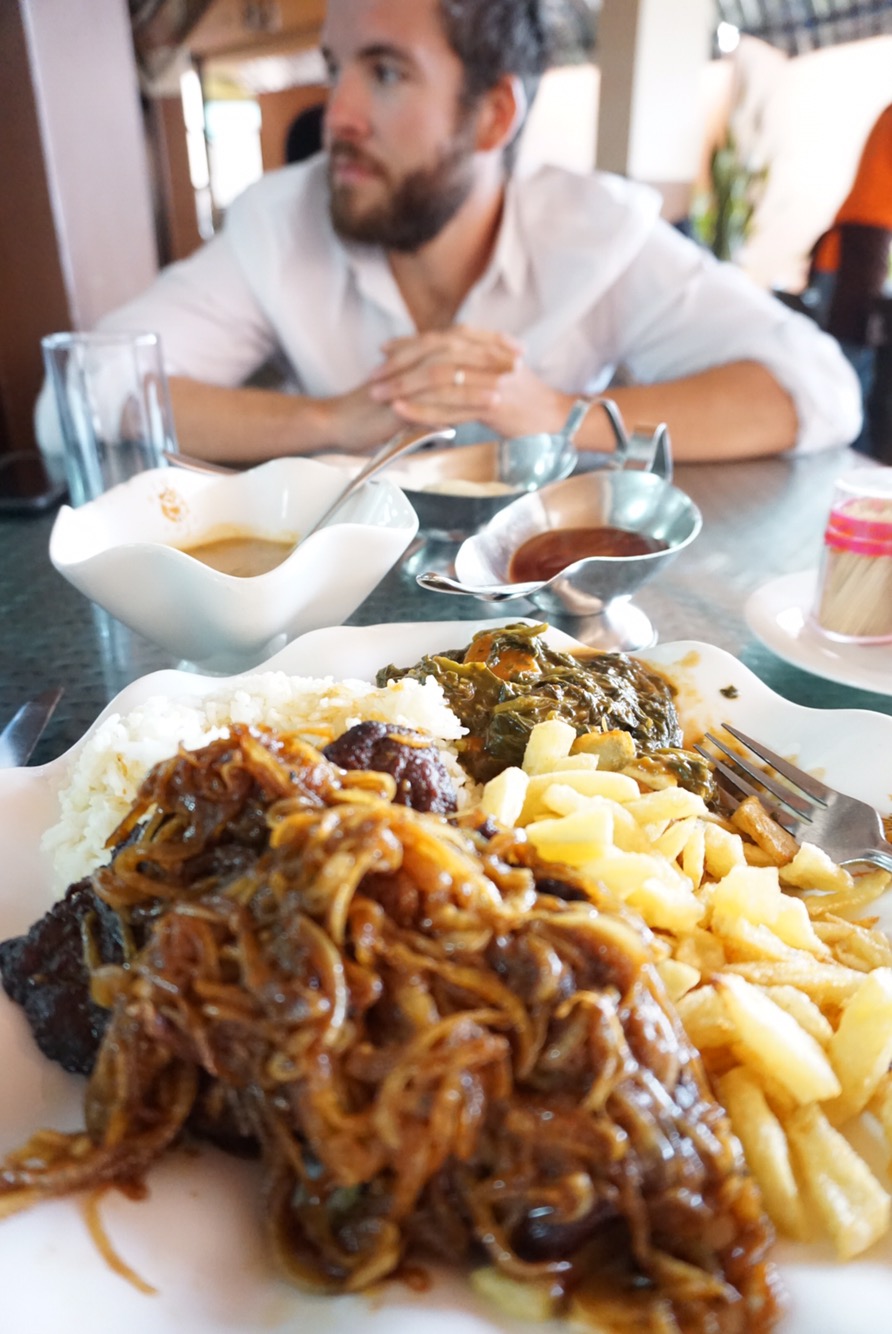 We headed back to the hotel to rest but after such a heavy afternoon we decided to stay in and watch Hotel Rwanda (which I  had never seen before).

Our visit to Kigali was educational to say the least! I couldn’t believe how little I knew about the genocide before visiting Rwanda and was glad to have the experience to visit the memorial. I can’t recommend it enough to anyone visiting Kigali!

It was time to get some shut-eye; we had a 6:30am wake up to meet our driver and head to Uganda where we would be gorilla and chimpanzee tracking for the next few days!

One thought on “Rwanda: Kigali”