After a pretty relaxing 6 weeks visiting friends and family in Canada, it appears I have some catching up to do! My best friend got married in Cabo on July 19th, and since we were travelling to Mexico anyway, James and I decided to spend 6 days in Mexico City, followed by 4 in Oaxaca. It’s probably one of the most surprising destinations I’ve been to in that I wasn’t really sure what to expect, but we absolutely loved it! Rather than walking through what we did on each day, instead I thought I would share a few of our highlights.

If there’s one thing we completely nailed while visiting CDMX, it was eating. The food there is simply amazing, from the upscale restaurants to the taco stands that you can find on nearly every corner (think of Starbucks in New York). Our first big stop was Quintonil.

There’s no denying it, Mexico City is definitely on the world map for food, with two restaurants on the World’s 50 Best Restaurants. And when it comes to Quintonil, there’s good reason! Arrive hungry, because there are 12 courses and (trust me) you will want to finish all of them! We opted for the wine pairings as well, which didn’t disappoint! Also, make sure you’re not in a hurry. Being that it’s Mexico, there is a tendency for things to run slow but it is likely due to the number of courses that you will spend well over 3 hours here. You can also go for an A La Carte option, which some of the later diners (those arriving after 10pm) chose. 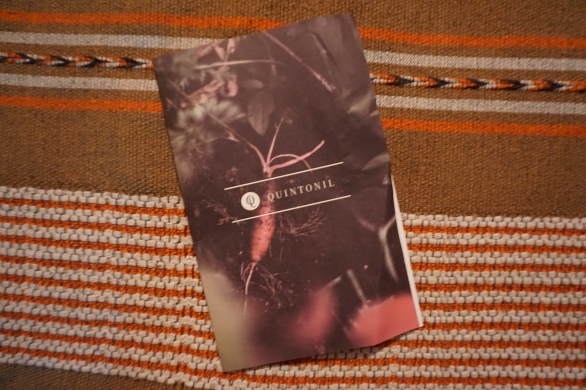 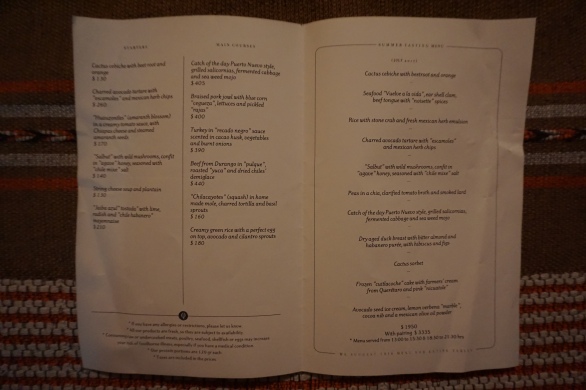 The standout dishes for us included: cactus ceviche with beetroot and orange,  rice with stone crab and fresh mexican herb emulsion 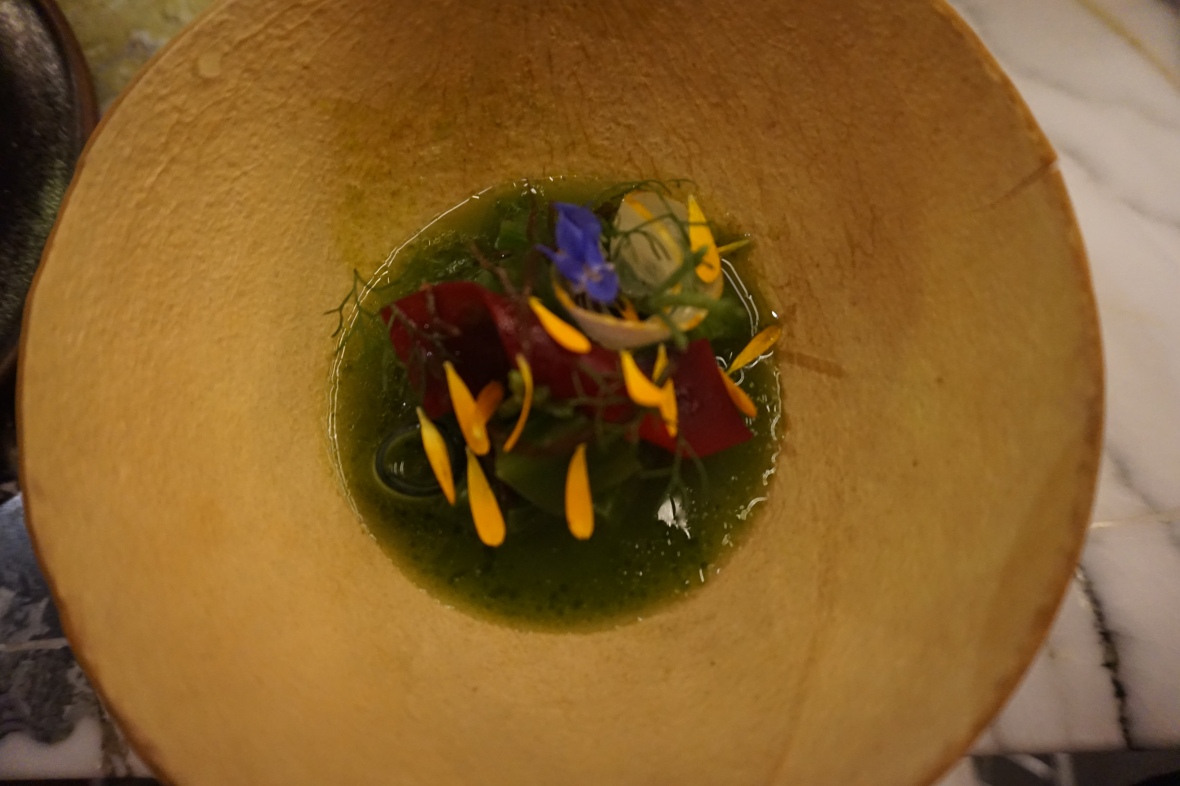 We were also pleasantly surprised by a beautiful Cabernet Sauvignon from Valle de Guadalupe in Mexico, called Volcan.

While it was far from the cheapest meal we ate in Mexico City, if you are comparing it to desgustation menus in Australia, Canada or the US (including wine pairings) it is excellent value.

The next evening we had a reservation at Pujol. Perhaps a little ambitious, given the amount of food we had consumed at Quintonil the night before but regardless we were excited. We had actually decided going in that we would order the a la carte menu so our stomachs didn’t stretch but after seeing the menu we were happy to see half the number of courses (plus there is not an a la carte option, at least that we saw).

You have the option to choose one of four dishes per course (apart from the mole course that is included for everyone), and we made sure to choose different courses so we could try as much as possible.

From what we tried, our favourites were the street snacks (which includes the smoked baby corn with chicatana ant dusting as seen on Chef’s Table), the sea bass ceviche, octopus with habanero ink, mole madre (aged 1325 days) and mole neuvo, nicutole and the lightest, most beautiful churro I have ever tasted! 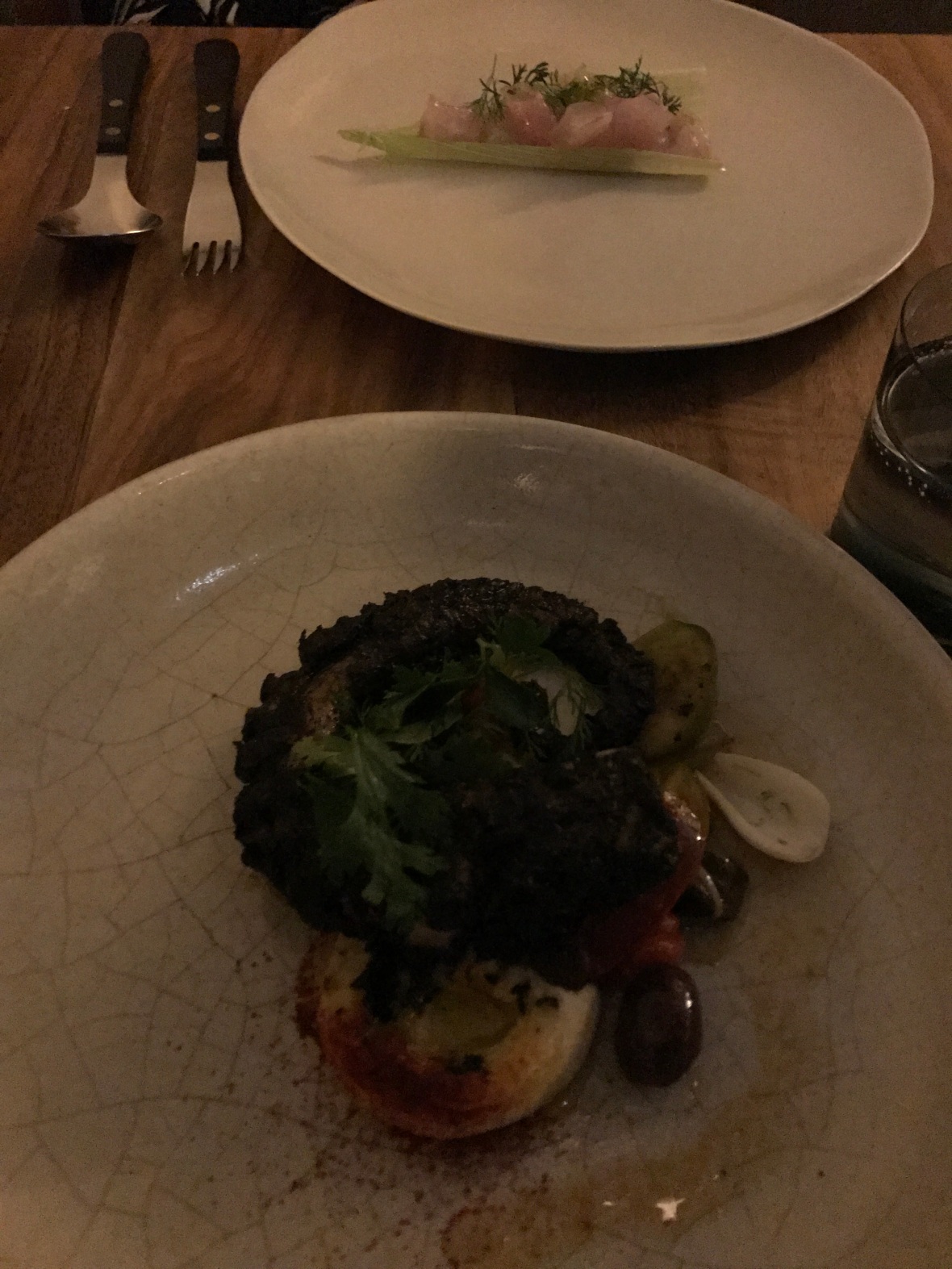 We didn’t opt for the wine pairings here, but instead when we felt like having a glass with a certain course the sommelier would come to our table with a recommendation.

These were two of the best restaurants we’d ever dined in, but if I had to choose one thing to eat in Mexico City for the rest of my life it would be…

Tacos (of the street variety)

Holy mole, the tacos. There are street vendors everywhere, and we took full advantage of the ones across the street from our Airbnb for ‘breakfast tacos’. The tortillas are incredible; it’s amazing how something seemingly simple can bring so much joy. I am seriously concerned about my ability to enjoy tacos in the future solely based on what a difference these tortillas make!

Most vendors will offer a few types of meat – chorizo, bistek or pollo at the very least. I preferred pollo (chicken) while James opted for chorizo but the good news is that we could easily have many of each since they were a mere 12 pesos a pop (87 cents Australian). My one piece of advice is to double check with the vendors which sauces are spicy (or piquente). One of the stalls we went to had a green salsa that was medium spice, and the next day we went to a different vendor that also had a green salsa which I put on all my tacos. I won’t go into the details about how all of my taste buds burned off, or how James somehow was blamed for ‘not warning me’ despite the fact that he had chosen a different salsa. The important thing is that I survived to tell the tale.

Mexico City is rich in culture and history. Here were a few of our favourite sites:

The Frida Kahlo Museum is spectacular, and a popular place for tourists to visit. The museum itself is part historic house and part art museum, as it is the building Kahlo was born and raised in as well as where she and Diego Rivera lived for a number of years.

You can purchase tickets online for a specific time slot, and I would highly recommend that! James and I decided to show up before the museum opened and try our luck, only to see that the line was already miles long! Luckily we hopped online and secured tickets which allowed us to enter an hour later – just enough time to walk around the colourful neighbourhood of Coyoacan and grab a coffee. 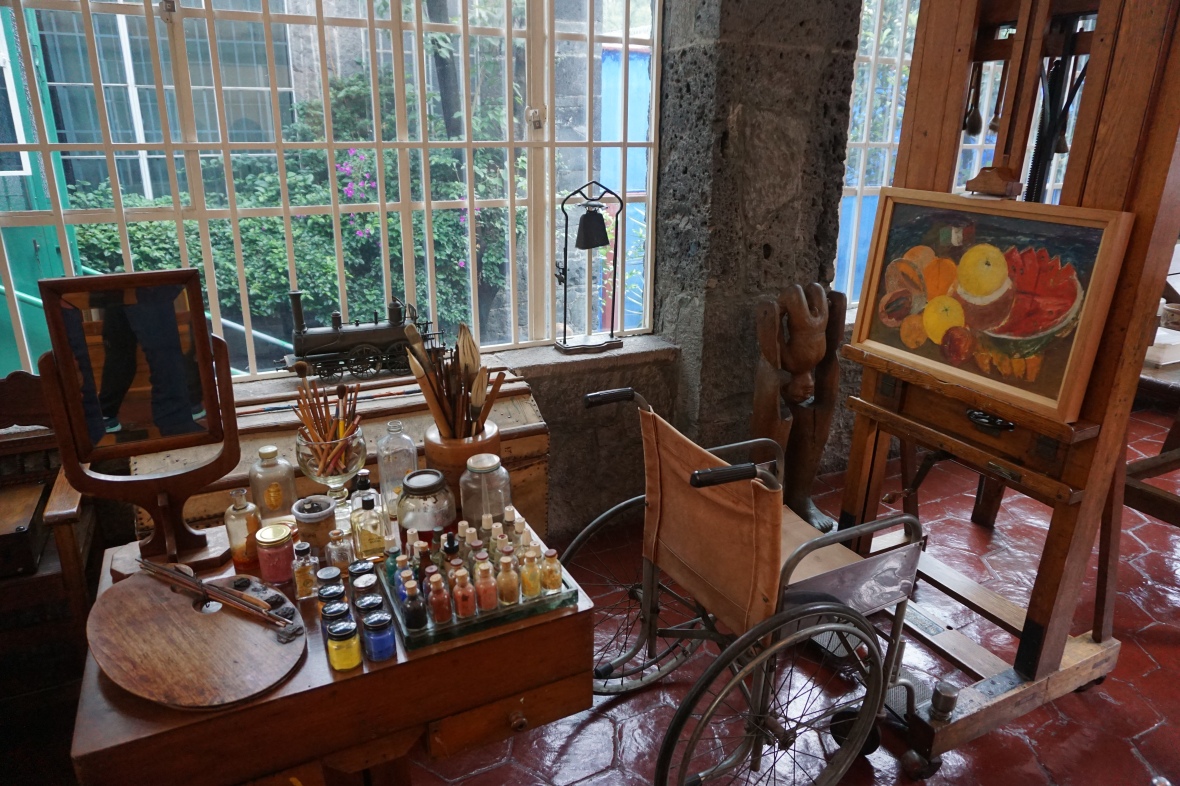 Admittedly, we did not know a ton about Kahlo prior to visiting Mexico, so we watched Frida before visiting which made us appreciate the museum even more!

After watching Frida and also learning about Diego Rivera, we decided to visit the National Palace (free entry) to see on of Rivera’s famous murals.

(How gorgeous is my husband, btw?)

To visit the Mesoamerican city of Teotihuacan, you can organize a tour or you can actually  take a bus from the Autobuses del Norte Station. It’s cost effective, easy to navigate and (most importantly for us) got us there before the tour buses showed up! We were the only ones on top of the Pyramid of the Sun when we climbed it, and about a half hour later it was a completely different story. We found instructions on how to get there using this blog post. 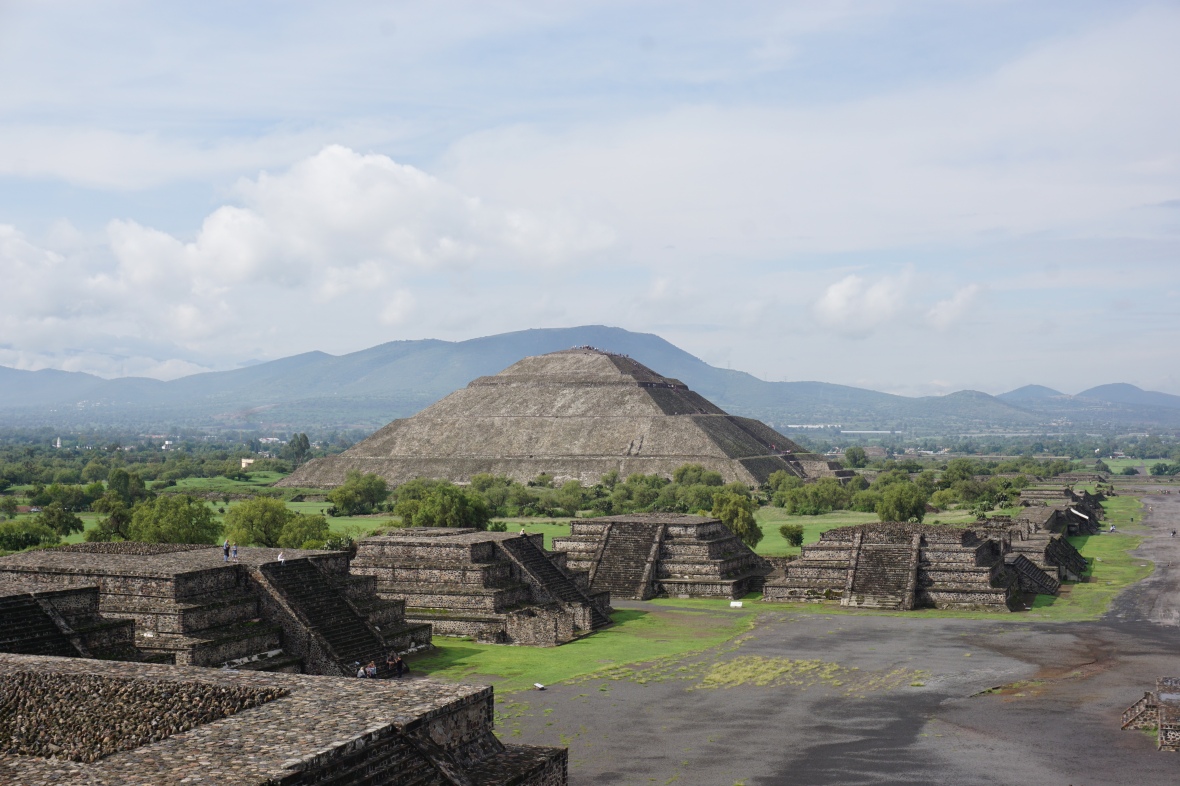 Other Things to See/Do

One of our favourite things to do when we are visiting a new city is to walk around and explore different neighbourhoods – and Mexico City was no different. We decided to stay in Juarez due to its proximity to Polanco (where our two dinners were) while still remaining central. The best part about staying here, for me, was the close proximity to Chapultepec Park which we visited nearly every day, whether it was to go for a run, visit a museum or explore the Chapultepec Castle (aka Capulet Mansion in Baz Lurhmann’s Romeo + Juliet). 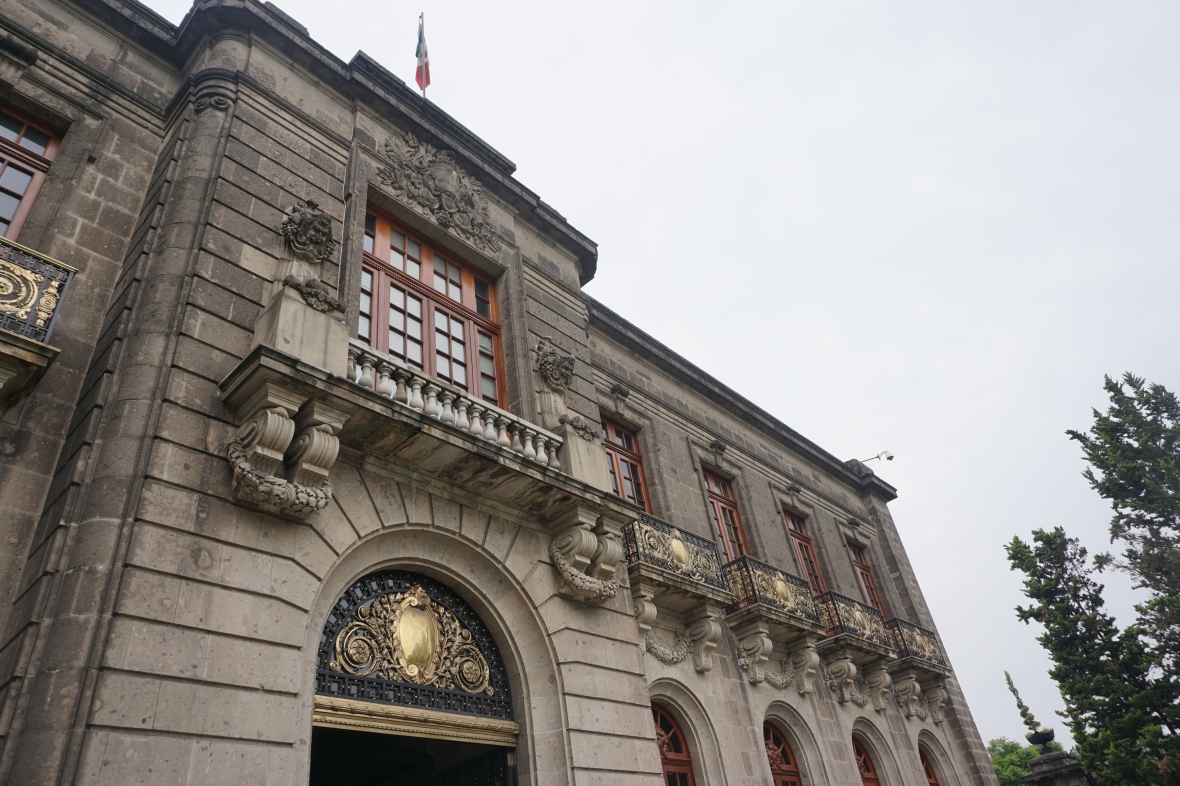 Mexico City really was a surprise for us. We were there for 6 days and there was no shortage of things to do, see or eat! We will definitely be back.