We left Addo Elephant NP to begin our drive along the wild coast – the birthplace of Nelson Mandela. Now, I’ll be honest – we didn’t really do the wild coast justice. Before arriving we didn’t realize you can’t actually drive the coast – you basically zigzag from the N2 down to whichever town you want to visit, and then back up to the N2. There are some ‘meandering’ routes you can take, but your average speed will be 40km/hr so you definitely need to build in some time! So that we could get a taste of the wild coast, we decided to make 2 stops along the way before arriving in Durban – Morgan’s Bay and Coffee Bay.

It was about 4.5 hours from Addo to the accommodation we chose – Yellowwood Forest . We took our time, stopping in East London to do some shopping and stock up for the next few days. We arrived at Yellowwood, got ourselves a site and set up camp. There were no other campers when we arrived, though a french family showed up shortly after to book one of the cottages. We are travelling slightly before the ‘busy’ period of summer holidays for South Africans, but still I’ve been surprised at how dead some places are while others (like Addo) are completely full! I suppose, particularly on the Wild Coast, we are in pretty remote locations.

We didn’t feel much like cooking, so opted to order from their menu and have an early dinner (their kitchen was closing at 5). They will bring your food right to your site, or you can eat at the picnic tables beside reception. 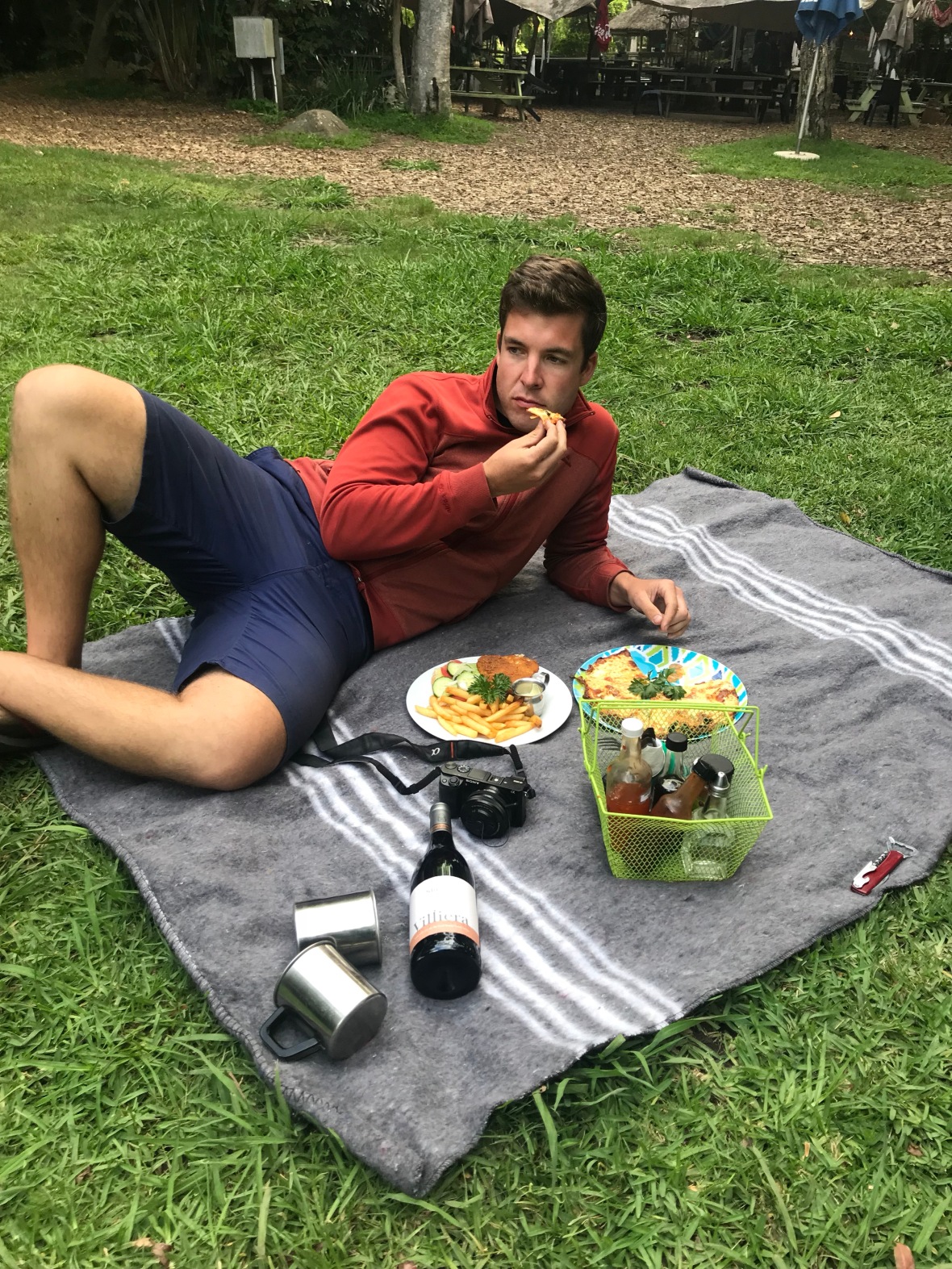 The next morning we drove around Morgan’s Bay. It (and Yellowwood) was a fine stopover to break up our trip but otherwise there wasn’t a whole heck of a lot going on! We drove back north to the N2 and continued on our way.

Coffee Bay looked like an interesting spot and we were excited to check it out. The accommodation I was looking at also offered a hike to ‘Hole in the Wall’ which sounded pretty great! The drive took about 4 hours and we arrived just after lunch. We got to the accommodation and, to be honest, it wasn’t really for us. I won’t mention the name as to dissuade anyone, but it was a really popular backpackers that got great reviews! We arrived and checked out the campsites, which were really small with no privacy or much of a view. And the free containers of condoms in the bathroom and signs of an ‘all you can drink’ theme party happening that night (on a Tuesday) were a bit of a red flag! So we got back in our car and continued on.

I was frustrated. We weren’t sure where to go, didn’t have cell reception and I was hangry – not a good combination! We decided to drive around and came across White Clay Resort. It was right on the ocean and the campsites had a great view. Better still, it looked like we would have the place pretty much to ourselves – apart from a truck with a rooftop tent that had opted to park closer to reception.

Tanya (who greeted us) was very friendly and helpful. She told us we could pick whichever site we liked, and if we were interested in hiking to the Hole in the Wall, she could arrange transportation back (for a fee of course – R75 per person). We decided to have some lunch (I was getting pretty grumpy by now!), go for a hike and set up camp when we returned.

The hike was gorgeous! One of the most beautiful coastal hikes I’ve ever done for sure, and it was a little rugged which added to the fun! Leaving White Clay, there was a clear path along the tops of the rolling green hills but that soon disappeared! But we knew the general direction and figured as long as the ocean was on our left we couldn’t get lost.

The path was up and down (or maybe it wasn’t and we were just off path in some parts? Since there wasn’t really a ‘path’ to speak of this is totally possible!) and had us climbing up big hills and then scrambling down rocks toward the water, before climbing up again. Some parts of the hike would be hell for someone afraid of hikes with sheer drops off cliffs into the crashing waves and rock. But we had a lot of fun! It’s hard to know the exact distance with all the zigzagging we did, but I am guessing it was about 8km but took us 3-3.5 hours with the ‘off-pathing’ we did. 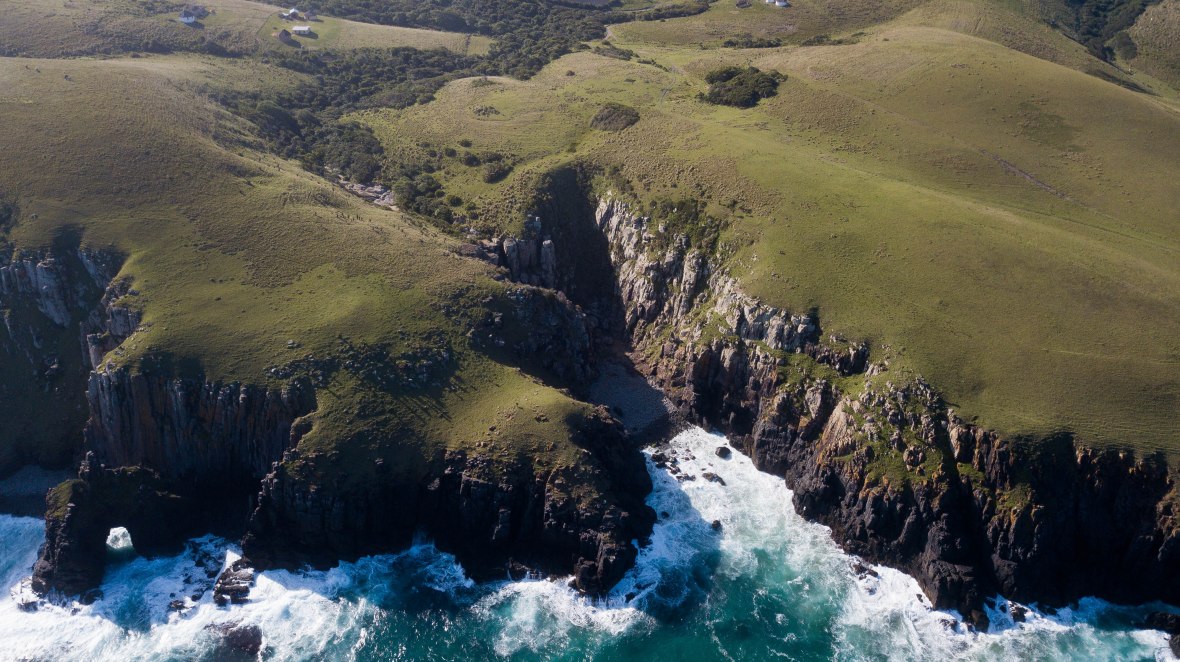 We eventually arrived at a sign for ‘Hole in the Wall Hotel’ and I told James I thought the actual attraction was around the corner. He was looking around, not really sure what to expect. I was laughing because this was an attraction he had starred on our map to check out, but didn’t know what it looked like! As we came out on the other side of the bend to a rocky beach and the hole in the wall appeared, James said “That’s it?”. It was really cool, but the hike itself was even better!

We called Tanya for a ride back to camp and she informed us that her friend, in a pickup truck, would meet us at the hotel. We were tired and in need of a shower, so when he drove up we didn’t hesitate to just jump into the truck bed which made for an exciting drive back. And the sky was on fire as the sunset, which was pretty picturesque.

​​
Still feeling full from lunch (even after our hike) we settled on cheese and crackers for dinner before jumping into bed and having a great sleep until about 5:15am when the sun was shining brightly into our tent! 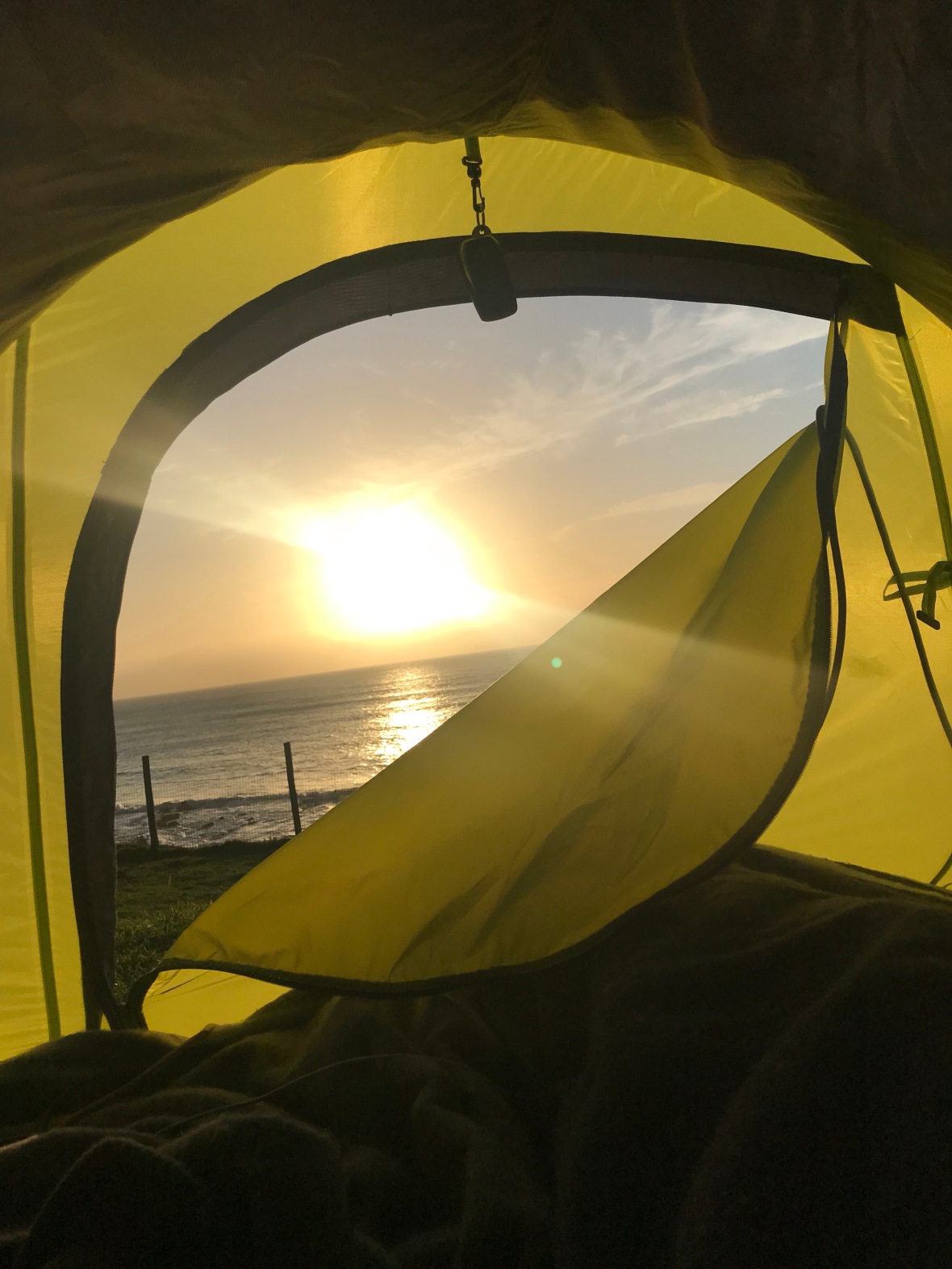 I don’t think I can really give a good opinion of the Wild Coast as there was so much we didn’t see! But certainly from our hike in Coffee Bay, we could tell that this was a beautiful, rugged and untouched part of South Africa.