I’m just going to come out and say it – New Zealand is the most beautiful country in the world. A bold statement, to be sure (particularly coming from a Canadian!) but it’s true. Literally everywhere you turn looks like a photo out of National Geographic.

Needless to say, we were so excited to get back to NZ, and even more excited to explore some new areas. Given we only had 4 days, we really focused on the things that were most important to us. For me, the primary reason for going was to complete the Tongariro Alpine Crossing. We had also heard great things about Waitomo and the Black Water Rafting in glowworm caves, as well as Rotorua which is arguably the best place to immerse yourself in Maori culture.

We arrived in Auckland at 1am from Apia, and just headed to the Ibis Budget hotel near the airport to grab a few hours of sleep. The next morning, we got our rental car and started making our way to Waitomo, about 2.5 hours away. It was exciting to see a Countdown (a brand of supermarket) once we were on the road, and we stopped by to get a few supplies (like my favourite brand of peanut butter, Pics) before continuing on. We were planning on hiking Tongariro the 3rd day, but after hearing that the weather may be less than ideal I called Tongariro Expeditions as we were driving. The woman who I spoke with was so helpful! She let me know that the weather on June 10th was not looking good at all, but if we were able to hike the following day the conditions looked great. If we could hike it on the 9th, we would be able to self-guide and wouldn’t require any special equipment so in that moment we decided we would wake up at the crack of dawn the following morning to drive to Tongariro National Park.

We booked a 2:30pm tour with The Legendary Black Water Rafting Co. that afternoon, and had a bit of time before we needed to be there so stopped for lunch at Huhu – across the road from our B&B. Huhu had great reviews and it didn’t disappoint, definitely one of the loveliest meals we’d had in weeks! After, we checked in at Waitomo Caves Guest Lodge B&B and were welcomed by Lynn and Richie who were fantastic. Lynn gave us the rundown and when we mentioned we would be leaving before 5am the following morning she let us know she would make up some breakfast hampers for us.

We were finally ready to head out for black water rafting! We showed up to The Legendary Black Water Rafting Co. for our ‘Black Labyrinth Tour’. Our tour guides quickly got us “suited up” in wetsuits, fleeces and boots for our tour. 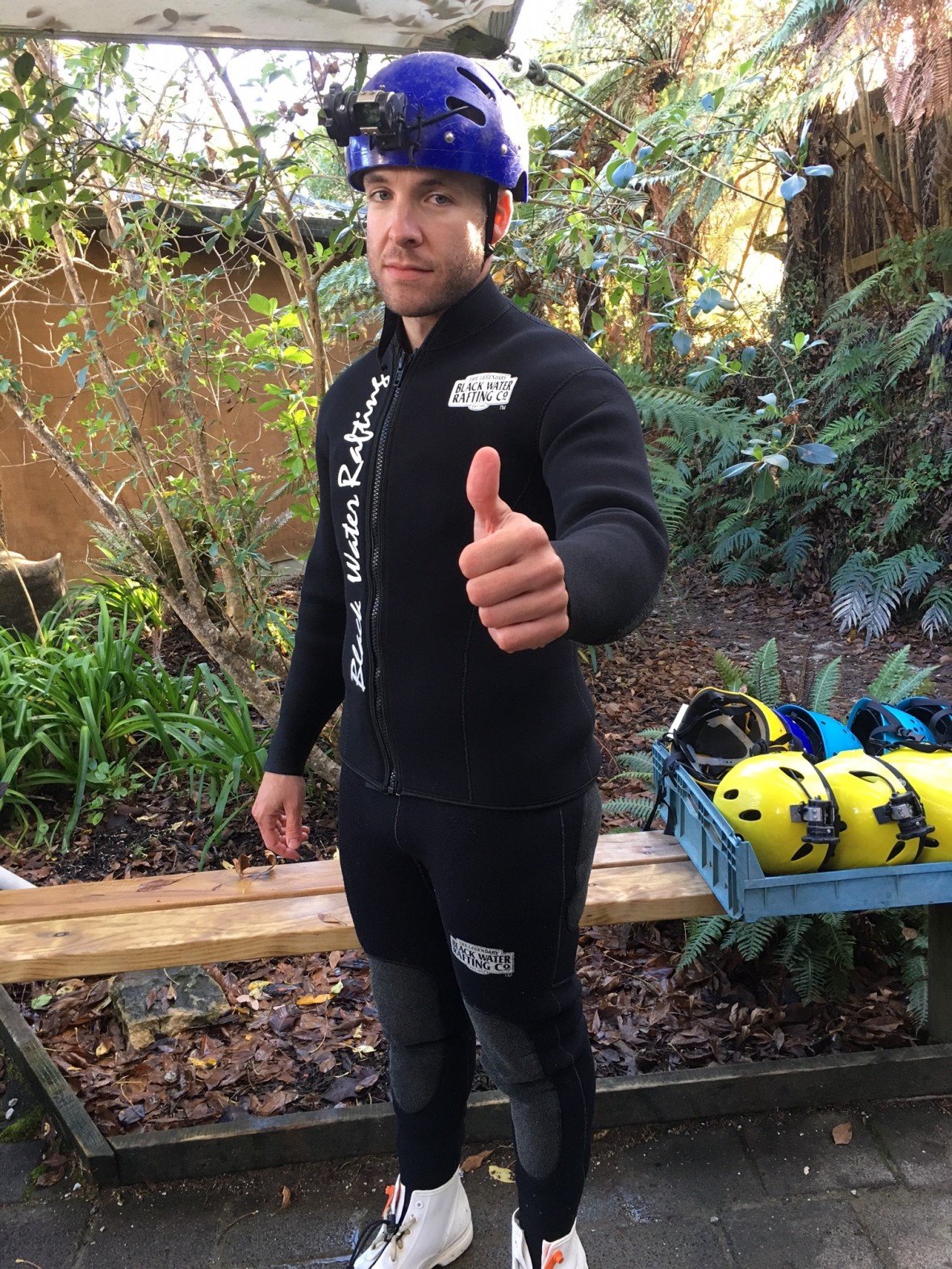 After that, we were on our way. James and I joined on with a tour of kids (I say kids – they were in their early 20’s) doing a Kiwi Experience Tour. They were all super friendly and having just arrived in NZ were keen to hear our thoughts on what we’d seen/done in the past. We got out of our tour bus ready to hop in the caves, but first there was a test. We had to practice our technique for jumping off waterfalls in the cave – for real. It was cold (after all, it is winter in NZ!) even in wetsuits. We all took turns jumping backwards off a small dock and landing in our innertubes. After everyone was wet and shivering, we were ready for our tour. Despite being freezing, the whole thing was really cool! You are basically floating/jumping/walking through a cave for the better part of an hour. Jumping off the waterfalls was a lot of fun, but my personal favourite part was when we all made a snake formation by holding on to each other and floated under hundreds of glow worms! Walking through the water and rocks was difficult at some points, as I’d lost complete feeling in my feet. It looked like I’d had one too many red wines, to be honest! But the LBWRC is smart; they end the tour with access to nearly boiling hot showers, warm soup and bagels so we were all feeling like ourselves before too long! The whole tour takes about 3 hours.

Since we were heading out bright and early, we went into town to buy some supplies for lunch the next day. I was also keen to get some warm socks, beanies and mittens for the hike. We found some thick, warm, woolen socks at the Countdown in town as we picked up our lunch supplies but no luck with the other items. As we drove back toward our hotel, James noticed what looked like an army surplus store. Perfect! We walked into Haddad Menswear and boy were we in for a treat! One of the owners (either John or Karam – they’re brothers and we didn’t get his name) helped us pick out some fleece beanies and merino wool mittens but along the way we heard about 20 different stories as he tried to sell us other items. I swear we were in there for a half hour! He swore up and down that the socks we purchased weren’t as good as the ones they carried (probably true) and that after the hike we wouldn’t be able to walk (spoiler alert, we were just fine). Eventually, we made our exit as he was still yelling stories at us out the door!

The next morning was a 4AM wake-up, to pack, get dressed, get some breakfast and make the 2.5 hour drive to Tongariro National Park. We got to Ketehari Carpark just as the sun was rising and the shuttle showed up soon after.

The 19.4km hike was incredible. Definitely the most amazing we’ve ever done (and one of the most challenging!). It was cold, but it’s a good idea to wear layers because it can get hot in an instant (between the sun and the incline!). I wore a pair of lulu leggings underneath a pair of lighter pants, a lulu t-shirt, long sleeve and zip-up on top along with a thin waterproof MEC jacket. On my feet, my thick woolen socks and some runners. And, of course, the beanie and mitts from Haddad’s. It was the exact right amount of clothing – I was never too cold and if I got too hot it was easy to remove layers. We brought two 1.5L of water, 4 sandwiches and some trailmix and that was also great for the hike (they say it can take 6-8 hours, we did it in 5.5 with 3 quick breaks). 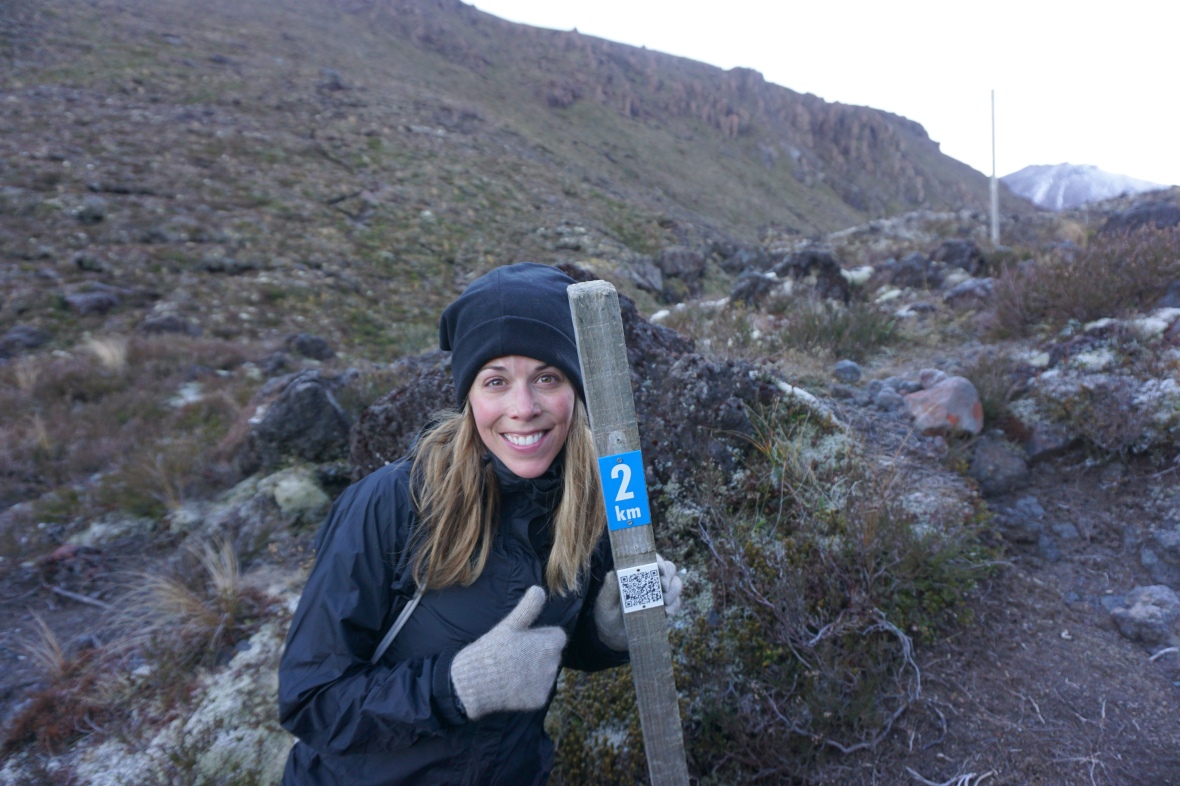 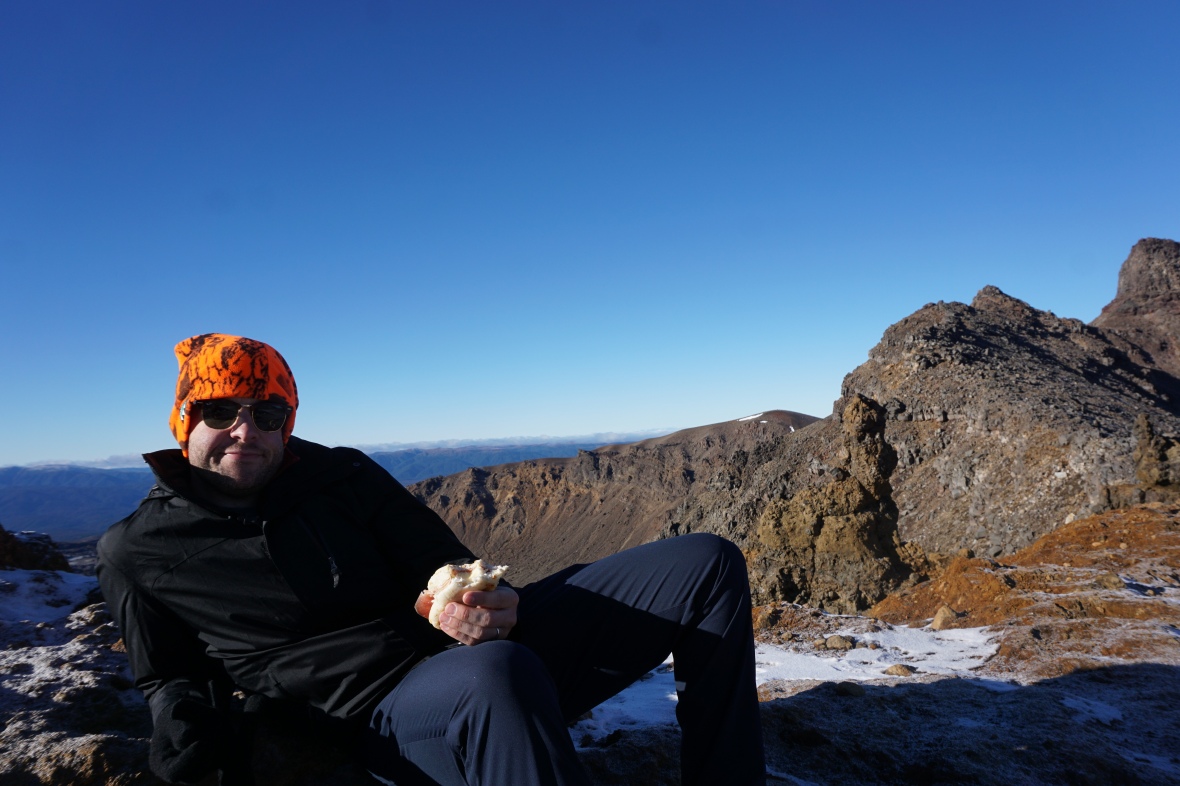 As we headed out, there was a group of us (probably 10 total) but as we continued on we were more spread out which was really nice. For the majority of the hike it felt like it was just James and I on the mountain. I keep writing about the beauty, but I really think the pictures do all the talking. 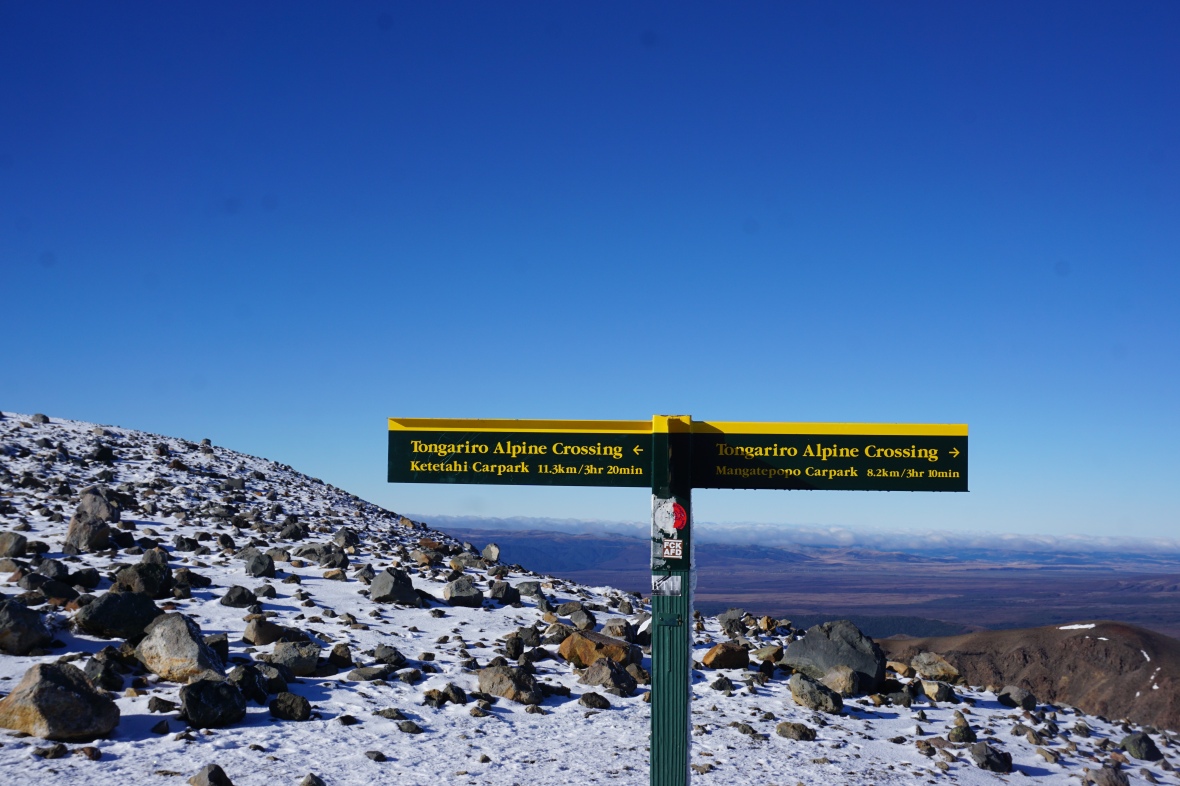 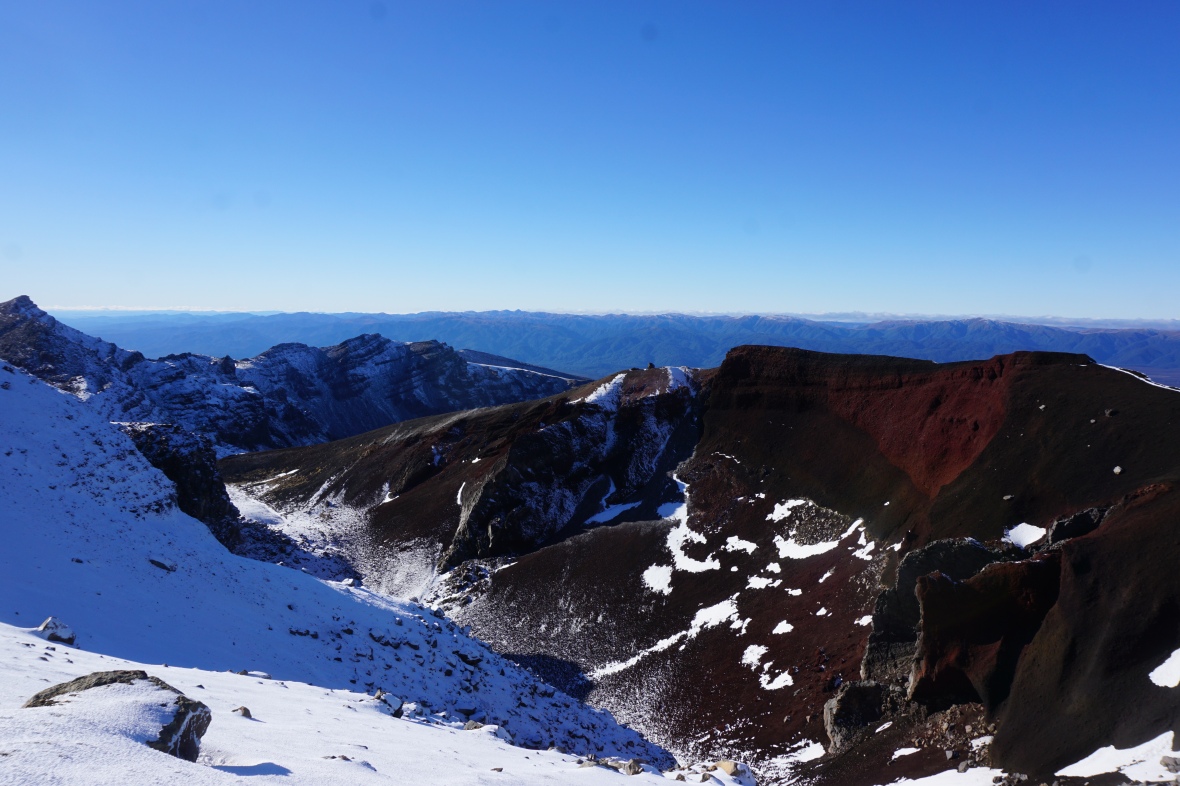 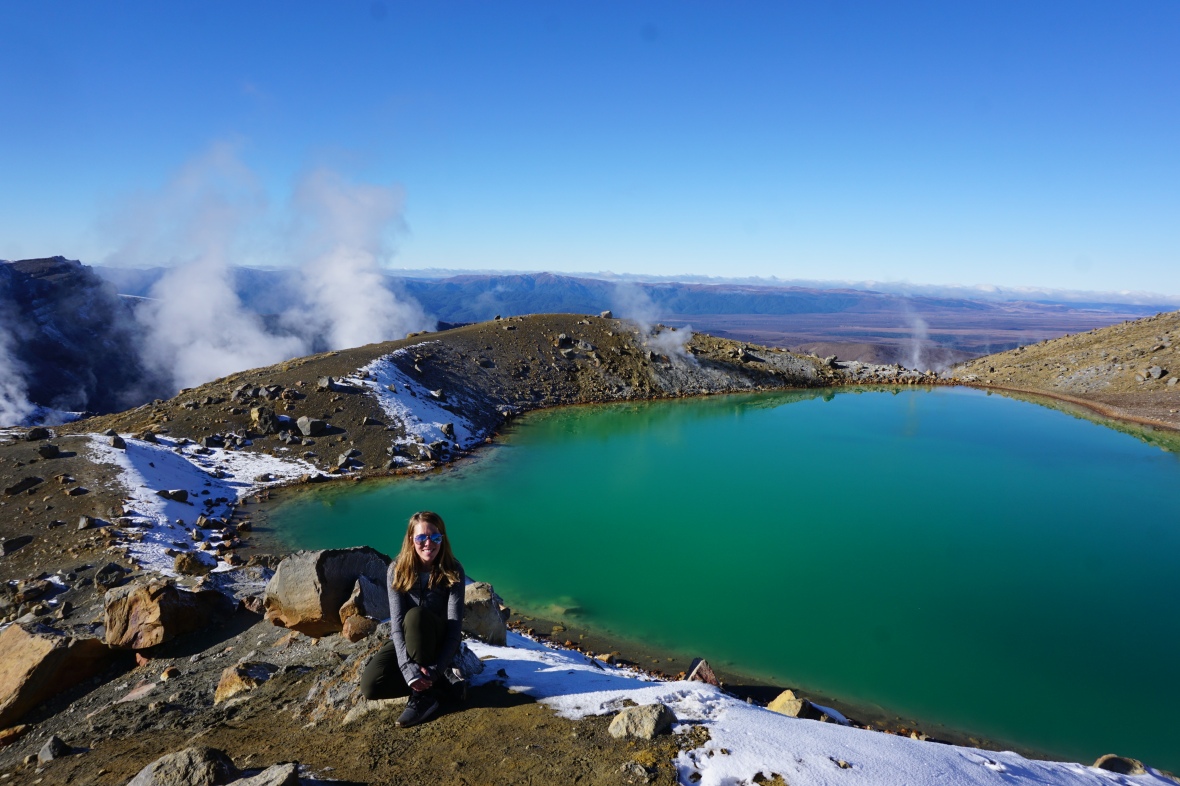 After our hike, we headed to our hotel – The Chateau Tongariro. By then we were just looking to rest and have a glass of wine, which we did! They also have a small, heated plunge pool and a sauna which we indulged in. We slept in the next morning, and by 11 were on the road for Rotorua. We decided to stop at Lake Taupo for lunch and found Replete Cafe . It was really busy – always a good sign – and the food was delicious. I had the frittata and James had a salmon salad.

Next, we decided to stop at Wairakei Terraces for a soak in a thermal pool. They have 3-4 pools with various temperatures (all warm) at a cost of $25 (note, if you need a towel, locker service or a robe they come at an additional cost). After our muscles had relaxed a bit we were back on the road and heading for Wai-O-Tapu Thermal Wonderland. It’s a 60 minute self-guided tour through a geothermal landscape. Many of the pools are sulfuric,  so needless to say it doesn’t smell like roses – but it is a sight to behold. 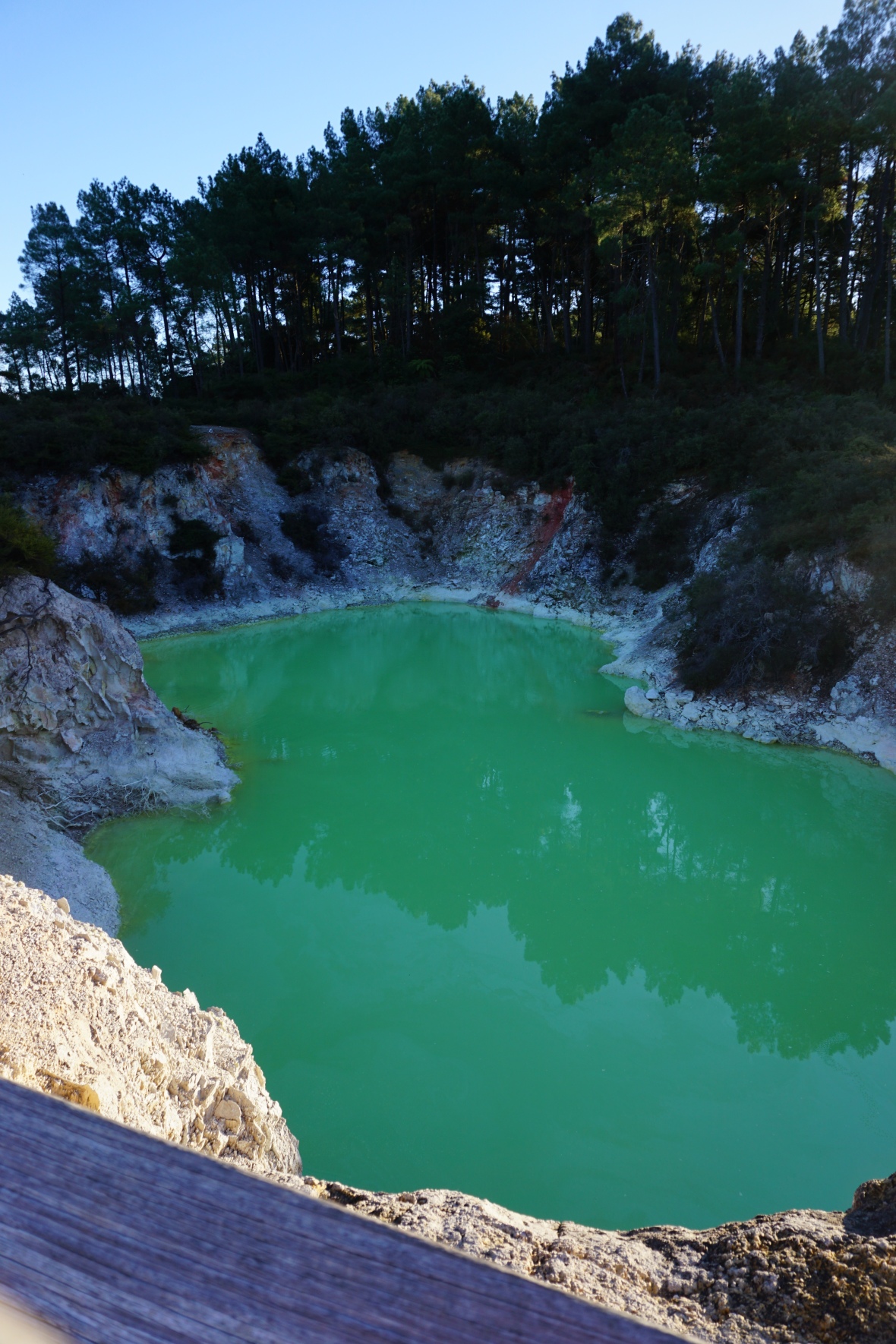 We stayed at a lovely Airbnb that evening, a short drive from the city centre. We headed into town to grab a bite for dinner at Hennessy’s Irish Pub; not normally our first pick but it had good reviews and the food was fantastic! It was also a crowded house as there was a big Rugby game on. We quickly ate and gave up our seats for the real fans 😉

We awoke on our last day well-rested and ready for the 3 hour drive to Auckland. But first, a pit stop at Hobbiton! It’s been years (20 to be exact) since I read The Hobbit and I haven’t seen the Lord of the Rings films in 10 but it was such a popular and renowned attraction we felt we couldn’t miss it! We arrived just after 12 and bought tickets for the 12:30pm tour. Many on Trip Advisor mentioned buying tickets in advance; I’m not sure if it’s because we were visiting in the off season but it was really no problem just showing up.

The tour was absolutely fantastic! The set is impeccable. After the LOTR movies, the set was torn down but when Peter Jackson started working on The Hobbit films, he and the Alexander Family decided to partner up and make the set permanent so fans could enjoy it for years to come. The level of detail is insane! From the fake moss on the gates outside the hobbit holes, to the plum trees, to the props outside each home and the entirely replicated tree with imported leaves on top of Bag’s End. Our guide was able to provide us with stories on bloopers that were kept in the film as well as details about the making of the set (for instance, there is a laundry line by one of the hobbit holes and a woman walked back and forth between the hole and line hundreds of times just to make a path for the set!). It really gives an insight to Peter Jackson’s attention to detail! 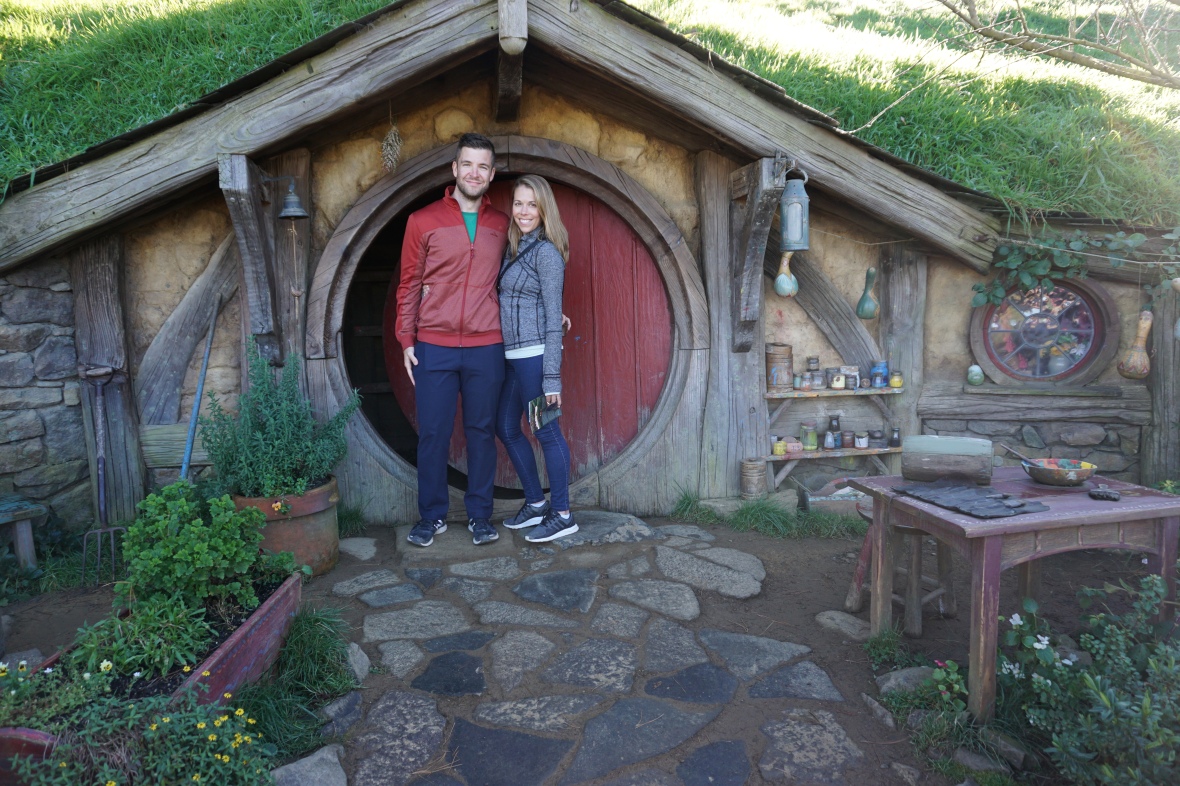 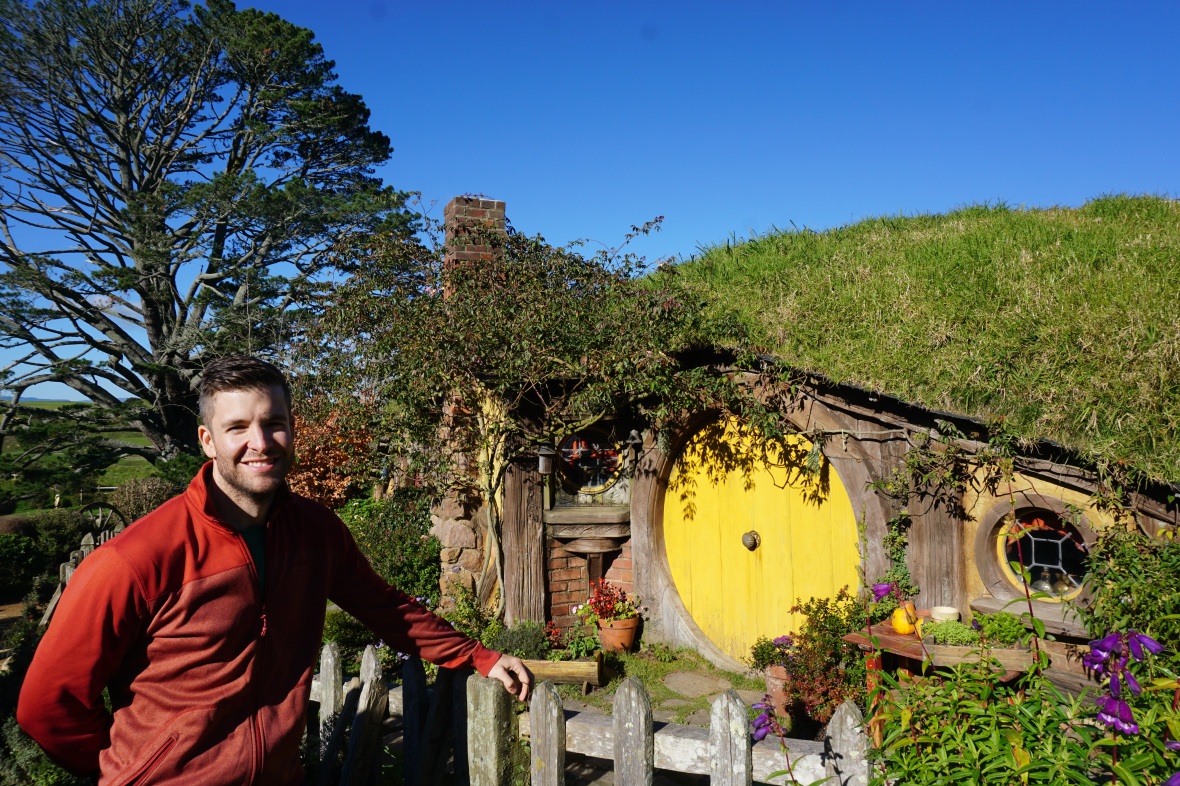 After the tour (which lasts 2.5 hours) we were bound for Auckland. Time to get some shuteye so we’re up bright and early for our flight to Perth! We’re meeting our good friends, Jeff & Katie, who we have been planning this trip with for the better part of 4 months. We can’t wait to catch up with them and see more of beautiful Australia. More on that in the next post.

One thought on “New Zealand: Exploring the North Island”