When looking at the Lonely Planet guide for the South Pacific, the number one thing to do in Samoa is to stay in a beach fale and enjoy the gorgeous views of white sand and turquoise waters. It’s no wonder, and this was the laziest leg of our trip so far!

We arrived at Faleolo Airport in the evening and got in our rental car to hit the road for Apia, a 40 minute drive. They were in the middle of Independence Day celebrations and it was evident; the blue, red and white flags were everywhere! The sights on the road were interesting, from fruit stands to poles of fresh fish ready to be bought. Our accommodations in Apia (Ulalei Lodge) were modest – it was hostel style – BUT it had air conditioning. Luxury. It was evening and we were feeling tired so we headed out for some supplies and called it a night. The next morning we actually went for a run (!) but when its 30 degrees and humid at 8am, 5km was the most we could handle. After, we decided to check out the shops/restaurants by the water and the market. We split a $1.50 lamb bun (more delicious than it sounds!) and each bought a coconut. 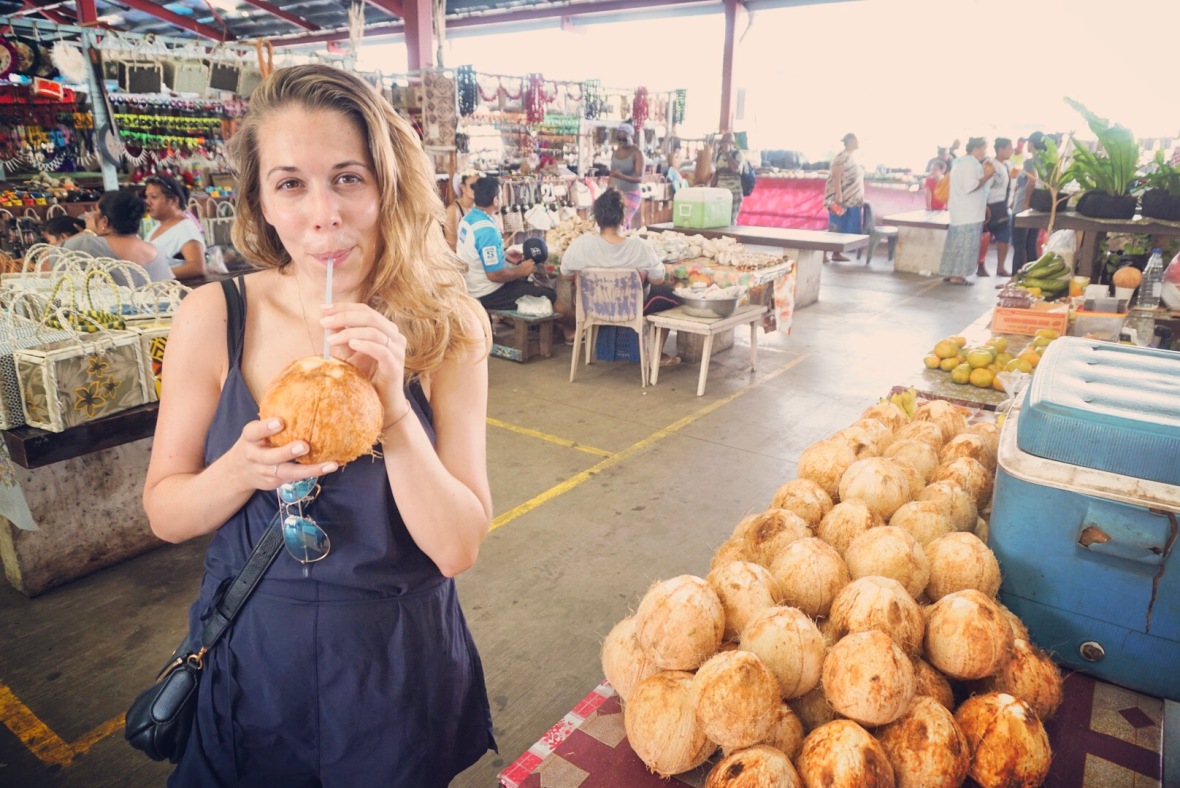 Around lunch, we decided to go to Palolo Deep Marine Reserve nearby for some snorkelling, after reading it was best to go at high tide. We snorkelled for an hour and split a banana chocolate (Nutella?) smoothie. By then we’d pretty much seen/done everything there is to do in Apia!

Eventually we headed out to a place nearby called “Edge” for their happy hour. It has nice views and the Oka (fish marinated in lemon and served in coconut milk with a little chili) was delicious. But we were after something a little heartier for dinner. On our way from the supermarket the night before we passed by a BBQ joint which was really just one table, some BBQs and a piece of tarp that had “$10 BBQ” spray-painted on it. So, naturally, we thought it would be awesome.  We awkwardly walked up to a group of Samoans eating and were welcomed into the fold straight away. Brian (aka “Mr. P”) was the owner of the BBQ which also functioned as a barber shop. His sons were behind the grill and served us up a big plate of chicken, taro and some salad.

Jay, originally from Samoa, but now living in Auckland was super friendly and took a liking to James from the get-go (who could blame him?) sharing his beer. Before long, they were bro-ing out, Jay going on about how handsome James is and James commenting on the sheer size of Jay’s biceps. I would have questioned just how keen Jay was on James until he showed us a picture of his beautiful wife and their 3 kids. Before too long, James was getting his hair cut by Ivan – one of Brian’s sons. 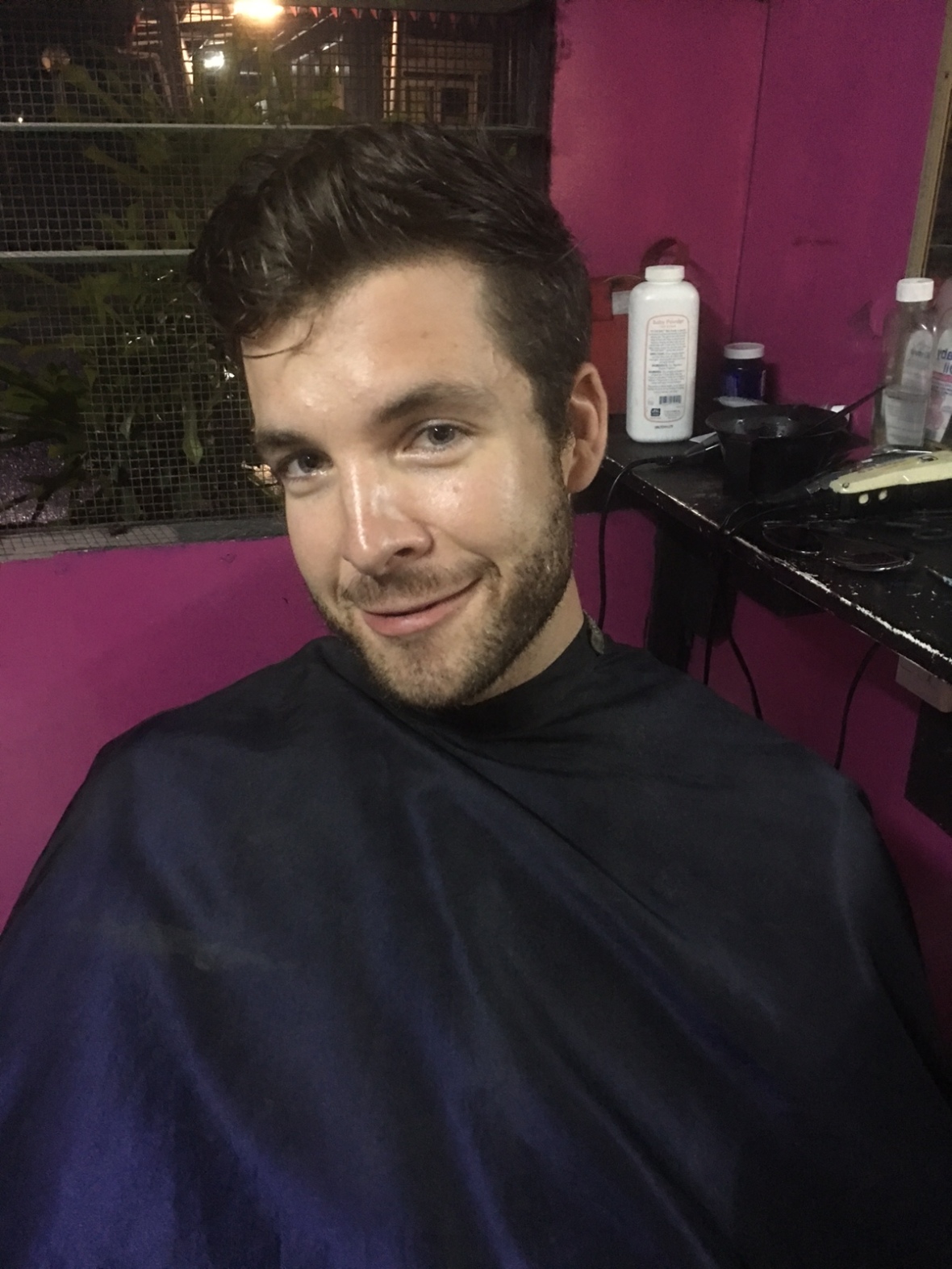 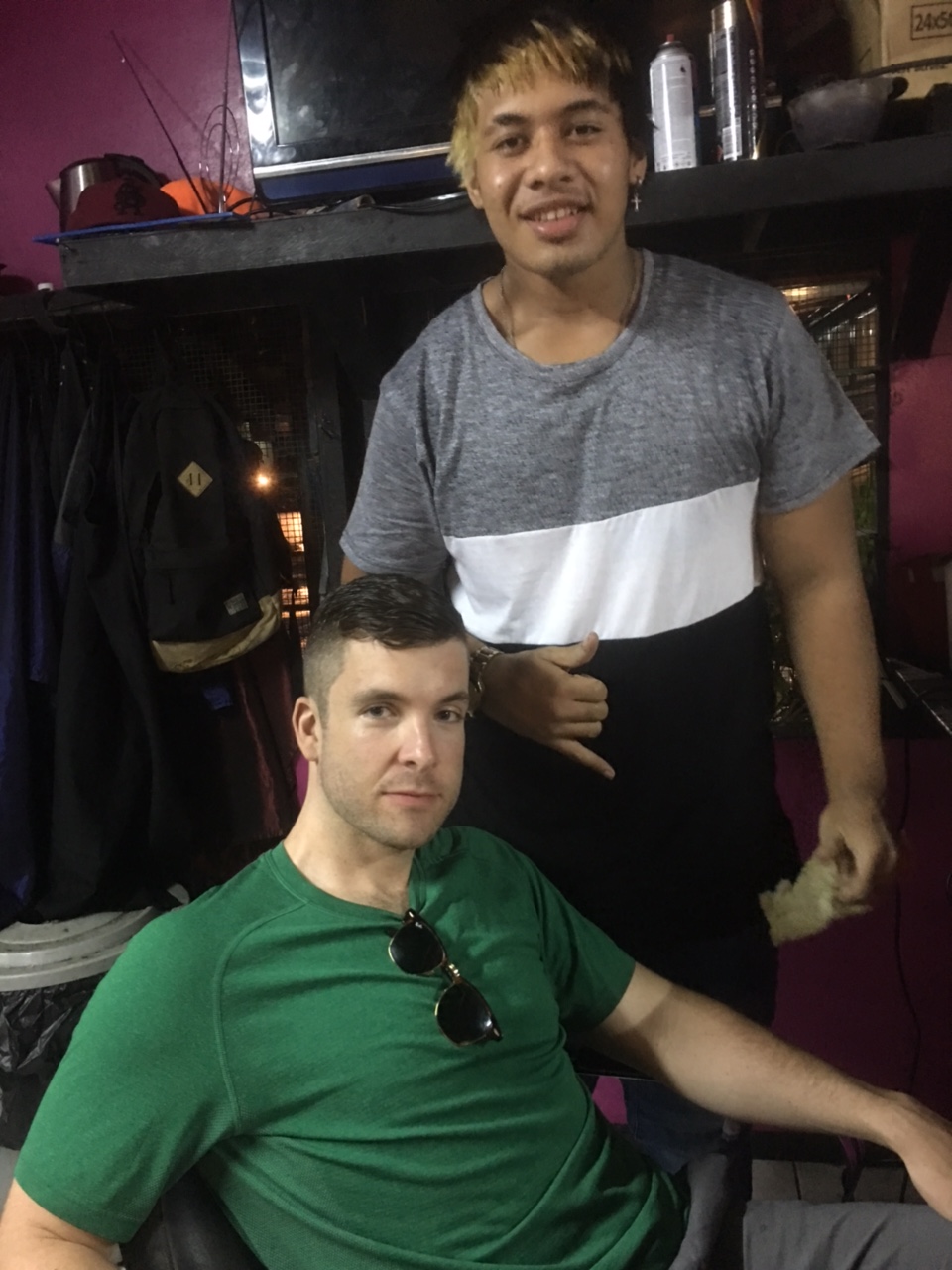 2 hours later we were on the road, having what was likely the most authentic Samoan experience one can have; nothing you would find in a guidebook. And I failed to mention when I had to use the washroom, I had to go next door to a storage facility where the security guard walked me around to the back with a flashlight and pointed at a door and then left me there in the dark room to figure things out for myself (Mom if you’re reading this it was very safe!). We headed back to finish our most important task of the day – finish season one of Fargo (I know, we’re way behind).

The next day we woke early and headed to the fish market. We’d read that on Sundays all the locals flock there to score the freshest catch as their post-church meal. We’d also read that it has some of the tastiest fish and chips but, alas, just a lot of fish heads and nothing cooked. Sunday is definitely the Lord’s Day in Samoa; people don their nicest white outfits to head to service, most stores are closed and you can’t buy alcohol. So we had but one option for breakfast – Macca’s. To be honest, an Egg McMuffin wasn’t the worst thing in the world! 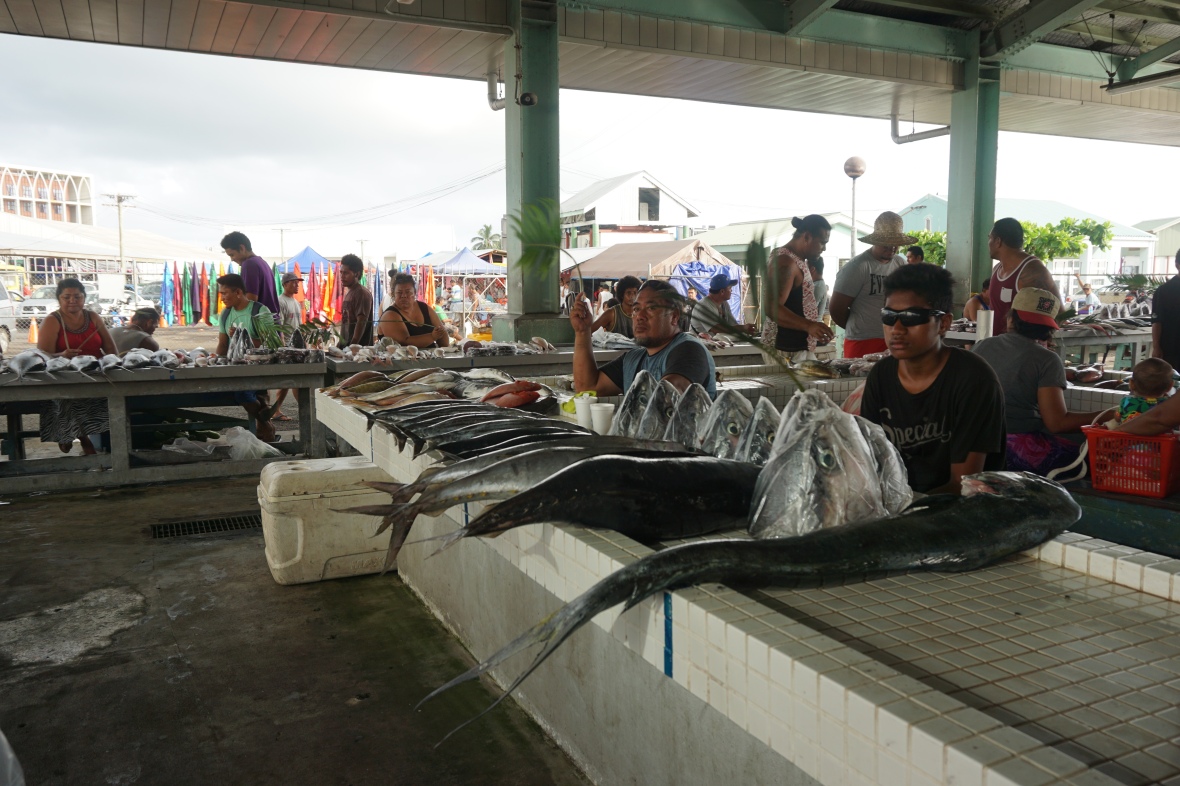 We set out to drive to Mutiatele where we would park our car, and head over to Namu’a Beach Island Fales for the night. You park your car for 10 Tala, and some kids call over to the island to send the boat for you. We headed over around 2pm, and were shown straight away to the fale we would be sleeping in. Picture a small, raised gazebo with tarp on the sides and 2 foam mattresses on the floor with mosquito netting above. It doesn’t sound all that glamorous, but it is one of the top things you’re meant to do while staying in Samoa. And the views are, naturally, incredible. 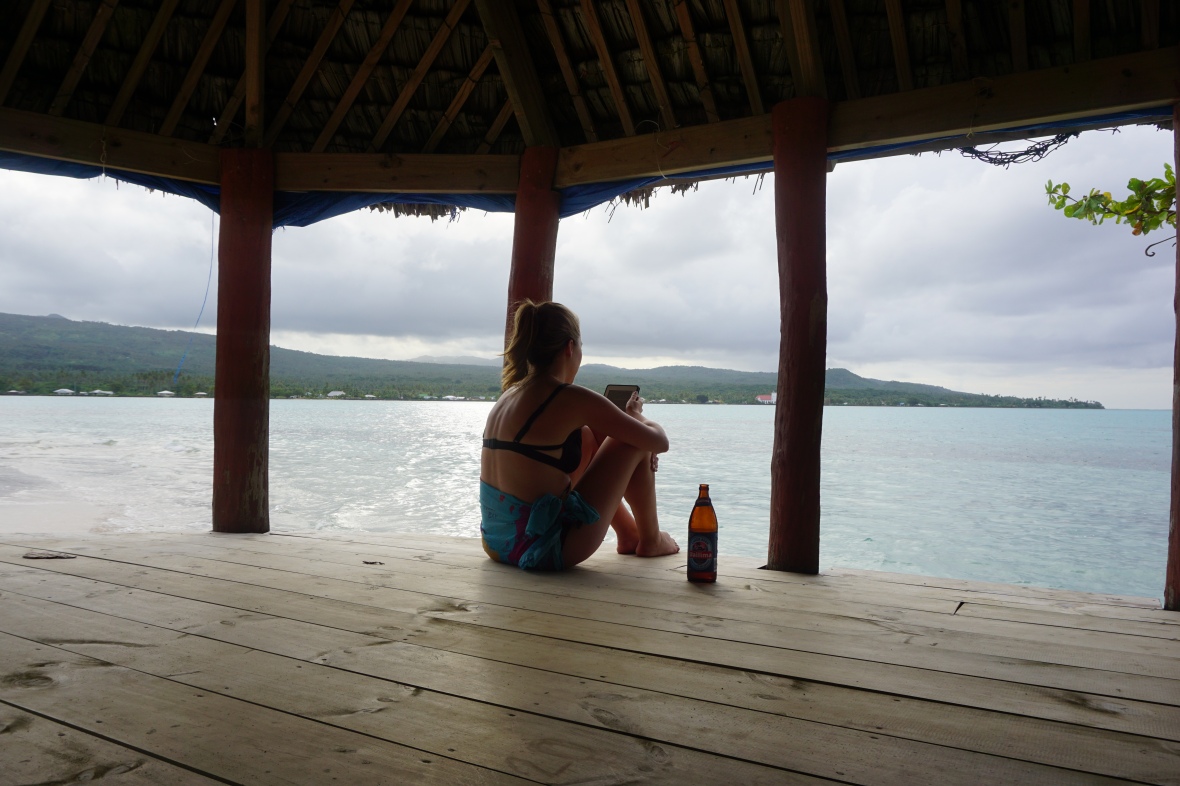 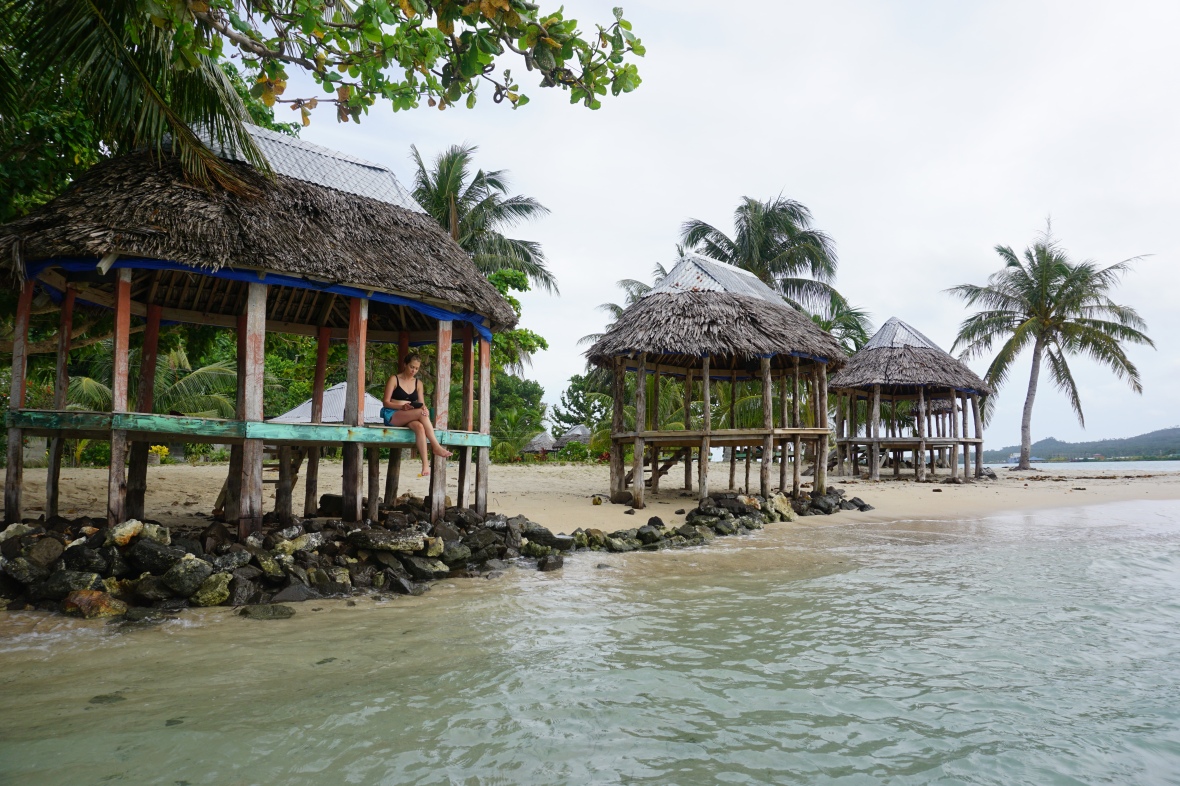 The staff (consisting of James – the owner – and two younger boys who man the boat and help with cleaning) sticks around during the day and then leaves the island after dinner so it’s really just you and the beach. It is the perfect place to relax on the beach reading a book, and take lazy swims to cool yourself off but there isn’t much else to do. James (and co.) came back the next morning to prepare our breakfast and around 11am we decided to set out for our next spot.

That night we were also staying in a fale, but it was closed with walls and a proper bed (fan-cy!). Before checking in, we decided to head to To Sua Ocean Trench. We walked up to the edge and looked over at the magnificent pool below us, about 20 or so metres down. This is a great place to hang out for a few hours and escape the heat. At the top, there are plenty of fales to set up your towel and read and, when you’re ready to cool off, the trench is a quick climb down a ladder.

We checked in to Taufua Beach Fales in the late afternoon and took a quick swim and shower before dinner. At Namu’a, the food was more authentic, Samoan style whereas Taufua served to the Western Palate: Spaghetti Bolognese, Noodles drenched in Soy Sauce with Vegetables, white rice and iceberg lettuce salad served family style. Needless to say, we were glad we’d had a late lunch. Still, the accommodations were nice, the shared facilities clean, and the people were very friendly.

The next day, we set off further along the south coast for Salamumu where we were staying that night. We made a pit stop at Sopo’age falls, which were stunning, and asked Tia (the woman working there) where we might get some fuel as we had only a quarter tank left. She sort of shook her head and said there was nothing nearby. Hmm. As we left, a tour bus was pulling in so we asked the guide as well. He said all of the petrol stations were on the north end of the island, close to Apia. We thought this was strange, but it didn’t leave us much choice than to cut up Cross Island Road to Apia and re-fuel before continuing. It was only 20 minutes to the nearest station, so not all that bad. After we were back on Main South Coast Road, we did end up passing a gas station 20 minutes from where we had turned, but seeing as how it wasn’t listed anywhere on the maps and no one seemed to know about it, we weren’t too put out by going out of our way.

One of the spots listed to check out in the Lonely Planet is Aganoa Black Sand Beach. James put it into Google Maps and we followed the direction down a dirt road which led to some fales. The man there informed us that we’d have to pay $10 to park the car, and it was about a 10 minute walk west. This felt wrong to me; on the map in our book it looked like it was pretty far east of where we were and I was doubting Google Maps but we decided to trust him and started our walk down the beach. We came across a man in a canoe who asked where we were going. When we mentioned the black sand beach he nodded as if to confirm we were headed in the right direction. After 15 minutes of walking we decided that it wasn’t what we were looking for and headed back. We weren’t feeling that well, and thought it would just be better to go to our hotel.

We stopped along the way to get a coconut on the side of the road, and before too long arrived at Sa’Moana Resort. We had a bungalow, with a good fan and our own bathroom so that was pretty exciting. That night was low key, we wanted to get a good night’s sleep since we were arriving in Auckland quite late the following evening with an early start the next day.

On our way from Sa’Moana back to the airport, we stopped at a Giant Clam Sanctuary that had been recommended to us by a couple we met at Taufua Fales. We put the village of Savaia into Google Maps and it brought us to the end of a road with a parking lot and a sign for the marine reserve. There was a woman there, who took our money ($10 each for snorkeling, plus $5 to park). She pointed to a large circle in the water of buoys and told us that was the protected area. We made our way into the circle and snorkeled around for a good 40 minutes without seeing a single clam! We saw heaps of fish and a few other interesting things, like a sea urchin, but I was starting to wonder if this was Aganoa Beach all over again. Just as we were about to give up, James noticed a stick reaching just out of the water and figured we should swim over to it in case it was a marker, and good thing we did! There were big, beautiful clams all around – bigger than anything we’ve ever seen on the Great Barrier Reef. Apparently you can see turtles around that area from time to time as well, but we didn’t have any luck in that department.

By then it was after lunch and our flight didn’t leave until 9:30pm which meant we had some time to kill. We’d done a complete circle of the island, and decided to head back into Apia and hit up the market for one last coconut. Afterward, we headed to the Sheraton which is one of the sights to see in Apia as it used to be an old stomping ground for soldiers in WWII (of course, it wasn’t a Sheraton then!). We had some coffee and tea, and enjoyed a bit of free Wi-Fi for the first time in 2 weeks.

I have to say, Samoa challenged me a bit. If you are the type of person that would like nothing more than to lay on a beautiful white beach with a book, it’s absolutely perfect. The turquoise waters were really a sight to see and the island is so green it looks postcard perfect. Still, we were looking forward to getting to one of our favourite places – New Zealand! We spent 2.5 weeks travelling around the South Island a few years back and this time we were heading to the North Island for a few days. More on that in the next post!