When we decided to come to Central America, I instantly started looking at surf camps. Ideally, a surf & yoga camp where you can eat healthy (possibly plant-based) meals. I had a picture in my head of waking up at 6:00am every morning for sunrise yoga, then grabbing a green juice on my way to the beach. Well, not surprisingly, those camps are hella expensive. Especially the ones I was looking at in Costa Rica.

BUT we found a great alternative at a fraction of the price in the small fishing town of Jiquilillo – on the north end of the pacific coast. We spent 5 blissful days trying to surf, reading in hammocks, and watching the incredible sunsets.

From Leon, it was a relatively straightforward trip. We got to the bus terminal early (7:30am) and asked where to catch the microbus to Chinandega. Unlike other microbuses we’ve taken, you had to buy a ticket before getting on the bus. We did this, and then walked over to one of the buses that was being loaded up. We must have looked exasperated with our large backpacks, trying to figure out where we would place them since this particular bus didn’t have a roof rack.

A man approached us and asked ‘Chinandega?’. When James nodded, he grabbed our bags and lead us toward a microbus that was empty. He loaded us and our bags and the driver immediately pulled out of the terminal. “Shoot”, I said to James, “I think we’ve just managed to buy ourselves a private transfer”. But after confirming with the driver that all we needed to give him was the ticket we’d already purchased (for 31 NIO, or $1 US each) it seemed it was our lucky day.

Our luck improved as he only picked up 3 other passengers and had THE BEST power ballads playlist I’ve ever heard; we’re talking Bonnie Tyler, Jon Bon Jovi, Chicago and more. The hits literally kept coming and I was having my own personal lip sync battle the entire time.

One thing we’ve realized more and more as we travel through CA by bus is that the terminals are never just one central location. It’s not as easy as getting off one bus and making your way to the next one – it almost always involves a cab ride between. Because of this, there are often taxis waiting to take you, and once they’ve sized you up (two gringos, for instance) they almost always know exactly where you’re going. The taxi from ‘Mercado El Bisne’ to ‘El Mecardito’ was 15 minutes and $1 US (30 NIO) for two of us.

Now the fun part. We’d made such good time that we were super early for the Chinandega-Jiquilillo bus (which leaves at 10). This involved a lot of standing/sitting around and people watching at the busy market (it was Saturday morning after all). 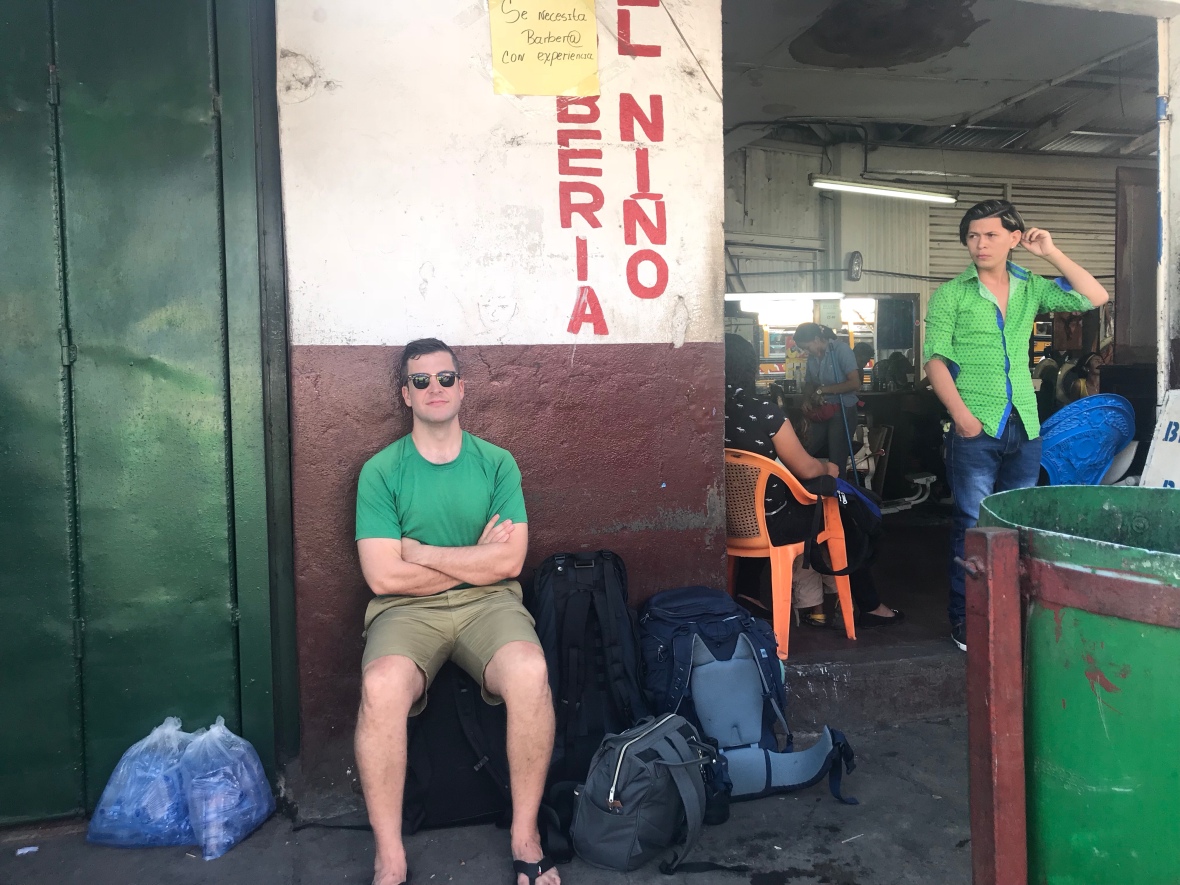 We were the only gringos around, and the locals had our backs as some would often walk by and ask ‘Jiquilillo?’ and then tell us when it would be coming. When the bus did arrive, around 9:50am, we had about 5 different people point it out to us. Not that it was hard to miss, as ‘Chinandega-Jiquilillo’ was painted colourfully on the front.

We boarded the bus with our bags and tried to find a seat. It’s amazing how quickly it filled up! One teenager pointed to an empty bench to say we could sit there. I went to chuck my bag on the shelf above and then noticed these seats were on the wheel well, so turned to James and said ‘Let’s go back a few rows’. There were two packs of gum on the first empty seats we could find, but we just moved them and sat ourselves there. The teenage girl came over looking less than impressed, grabbed the gum from us and uttered something about ‘gringos’. It seems that she was responsible for holding seats for those finishing up their shop at the market. Ah well, you snooze you lose. The cost for the bus was only 25 NIO each ($.80 US).

This was the first chicken bus we’d taken where we actually saw chickens – two in fact, that one lady had with her. Alive, one of them was sat inside of her bag and the other kind of draped across her lap. By the time it departed the bus was totally full, with people standing in the aisles.. It was a wild experience!

Happily, the bus dropped us right at our accommodation when we arrived, and we were quite excited to leave the bus and its chickens behind!

(Coming from Managua, the route is much the same. You take a bus from ‘Mercado Israel’ terminal, which also drops you off at ‘Mercado El Bisne’).

Where to Stay in Jiquilillo

Though there are a few options in Jiquilillo, once you start researching more the obvious choice is Rancho Esperanza which is where we opted to stay. It is a small, beach front hostel which offers a few different boarding options. We decided to stay in a private cabin with an attached bathroom, which ran us $37.75 US per night.

What to Do in Jiquilillo

While surfing is the obvious answer, there are lots of other activities that Rancho Esperanza can arrange for you. That being said, we mostly stuck to surfing, reading, and the occasional other exercise!

Since we arrived midday, we were able to sneak in a lesson that afternoon. Lessons are $11 US pp, and a daily surf board rental is the same. So we each had a board and did one lesson for $44 US. The lessons are really just to show you the basics and get you comfortable in the water. If you’re a beginner, like us, you probably only need one lesson as you’ll just be working on paddling and getting upright on the board for a few days! After our lesson Alex, our instructor, told us we were probably ok on our own going forward but we could schedule a lesson with him anytime. 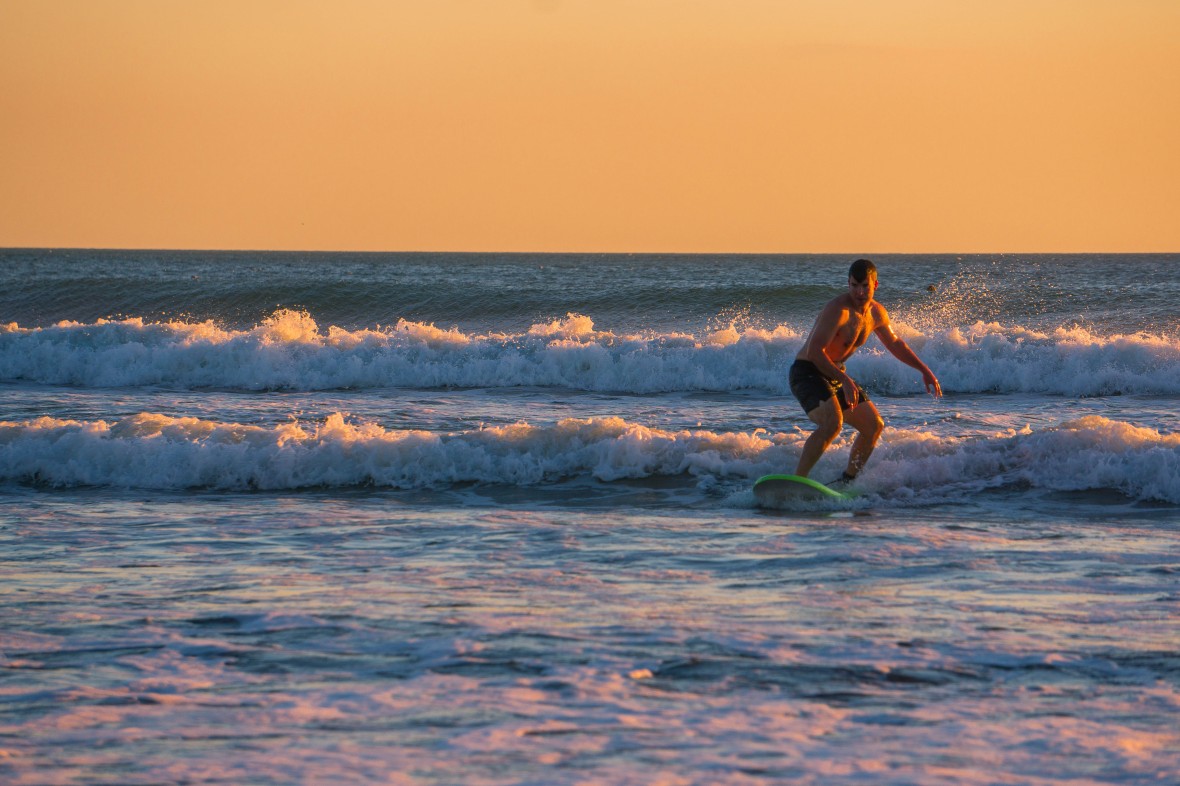 The next 2 days, we rented just one board between the two of us and took turns. It’s really freaking hard and I definitely appreciated the breaks in between with James would head out.

There is a board in the common area where they post high tide, low tide and the swell height. Though we were there for 5 days, the swell height on days 4 and 5 was about 1 meter, which is too high for beginners like us! That being said, James did decide to rent a board at sunset on our last night and managed to catch a few good waves!

Ah, my dream. To do morning yoga each day and surf in the evenings. While Rancho Esperanza offers yoga, it’s not a fixed schedule. There is a woman there who volunteers and also teaches yoga, so if you’re interested you just ask her to set up a time. A few caveats – it has to work with her schedule (which, while we were there, excluded early mornings) and you need at least two people to practice. I was interested in either sunrise or shortly after (which didn’t work for her) or sunset (which, as it turned out, didn’t work for me because it was the best time to surf) so it didn’t quite work out. BUT if you’re really keen, I’m sure you can work something out. Classes are $6 US.

Instead, I just did some Nike Training Club (NTC) sessions a few of the mornings 🙂

One of the activity options they have is to get a massage – and though it was definitely one of the strangest massages I’ve ever had, it was relaxing! It is a man from town who does the massages. He’s in his 60’s and will surely be topless while he massages you. It’s not deep tissue, so if you’re looking to get your knots worked out, look elsewhere. And it will end with him lightly running his hands down your body three times and then asking you to stay still for several minutes. I confirmed with James and Alex that this is the way he ends his sessions. Cost is $16 US for a one hour massage.

Ok, this one might seem obvious, but we didn’t miss a single sunset while we were there because they were nothing short of perfect. In fact, 95% of the pictures I have from our 5 day stay were taken at sunset.

Listen for people yelling ‘turtles!’. There is a hatchery just down the beach and on two of the nights we were there, they were releasing the baby turtles into the ocean which was amazing to see (though the video below makes it look a little terrifying!).

There are many other options if you want to take a break from surfing. There is a nearby estuary where you can go kayaking that we heard was beautiful, and there are also fishing trips that can be arranged. One thing we were interested in doing was the nearby volcano hike. RE will arrange it for you, but you must have a group of 4 or more, and we couldn’t convince anyone to join us. There is an option of doing the hike by yourself, but it involves taking the chicken bus and you have to leave much later in the morning (which didn’t appeal to us because it’s insanely hot in Jiquilillo!).

Beyond this, it is a great place to relax. There are hammocks everywhere and if you can get some shade in the afternoon reading a book or taking a nap is a perfectly valid activity.

Where to Eat in Jiquilillo

Honestly, the food at Rancho Esperanza was some of the best we’ve had in CA! They offer traditional Nica food, but also have other healthy options and always offer a vegetarian dish. I started every morning with their fruit, yogurt and homemade granola (which was so delicious, I ended up buying some to take with me after we left). Lunch options varied from coconut curry, to guacamole with plantain chips, to salads. And for dinner, most nights we choose to get fish – which comes grilled or fried, with rice and a bunch of vegetables (just make sure you place your order the night before so they can source the fish in the morning!). Most dinners ended with a frozen chocolate covered banana which brought me great joy because 1) it is a killer combination and 2) it makes me think of Arrested Development, one of the greatest shows of all time.

Though we thought the prices were high (compared to the rest of Nica), it was so delicious we didn’t mind. Breakfast was usually $4-5 US, lunch was $4 US and dinner was $5-7 US (the fish is pricier). Since we always shared lunch and dinner, the costs weren’t that bad for us.

On two of the days we were there we decided to check out what else was around and came across Rancho Migdalia. What a pleasant surprise! Despite it being 100 degrees outside, we opted to get the soup (which a lot of people seemed to be ordering) and it was delicious. The soup below contains a whole fish, a lobster, a crab, a heap of shrimp and some vegetables. And costs about $7 US. The only downside is having to clean and peel everything, but for that price I’ll happily do it. 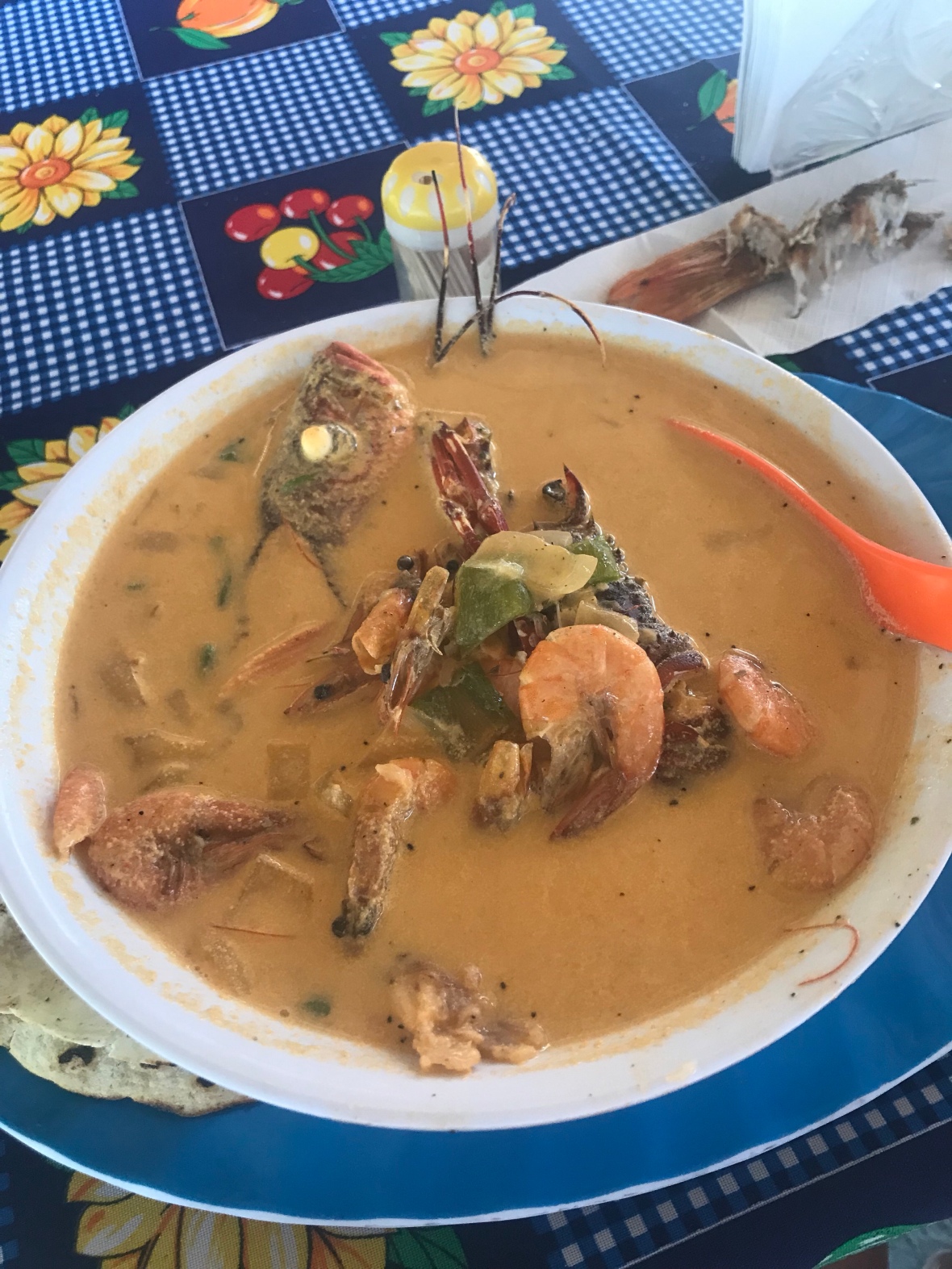 Rancho Esperanza was a dream. After 5 days we felt focused, relaxed, and maybe even a bit more confident on a surf board! We’ll have to see if any of the skills hold up when we make our way to Costa Rica.

Have you ever tried surfing before? Where did you try? Let me know in the comments below 🙂