James often joked that throughout our travels in Africa Cape Town was my ‘South Star’, After camping in less than ideal conditions (hello drop toilets and no running water) in East Africa, getting dusty in Botswana and Namibia and generally not having access to my creature comforts (you know, cell phone reception, good wine and shops) I was definitely looking forward to our brief stay!

And to make things better, we were meeting our friend Ayham there! Ayham went to high school and university with James. He and his wife live in Riyadh so even when we were living in Canada visits were few and far between. And though James is my best friend and a better travel companion than I could ask for (or deserve) and I think we were both looking forward to socializing with another person! 😉

We decided to drive from Stellenbosch to Cape Point, the most south-western point in the continent where the Atlantic and Indian Oceans meet, before driving into Cape Town. The drive is less than 85 kms, but as you begin driving down the peninsula, you’re nearly at a stand still as you go through the small beach towns. We were starting to regret our decision to go to Cape Point on a weekend (it was Saturday). That feeling was reaffirmed as we arrived at the entrance to the national park to a very long line of cars – by this time it was 2pm. But hey, we were here and we intended to make the most of it!

As we inched forward, James suggested I walk to the front to see if I could start the paperwork for the Wild Card we intended to buy. A Wild Card gets you into all the SA National parks; you pay an initial fee (for us it was roughly $350) and you gain entry into any park for a year. We’d priced it out that we would spend more than that visiting all the parks we intended to, so for us it was a good deal. Unfortunately, at the Cape Point entrance for Table Mountain NP you have to buy your wildcard inside the park, which means we still had to pay our entry fee. Wah, wah.

Needless to say, we were feeling a wee bit frustrated by the time we actually got inside the gate and made our way to Cape Point. We drove to the carpark and started our way up to the lighthouse, a lookout of the point. Tensions were running even higher as we tried to keep our patience walking behind groups of people that were constantly stopping on the stairs to take pictures. It was clear we were not going to be getting a picture with the infamous sign calling out the lat & long! But we did enjoy the view, took some pictures, and got the heck out of that area of the park and down to the Cape of Good Hope.

Guys, if you’re going to Cape Town you should definitely check this park out. But, a few hot tips:

We did stop on the side of the road on our way back up the peninsula to Cape Town, and James got a few drone shots in. 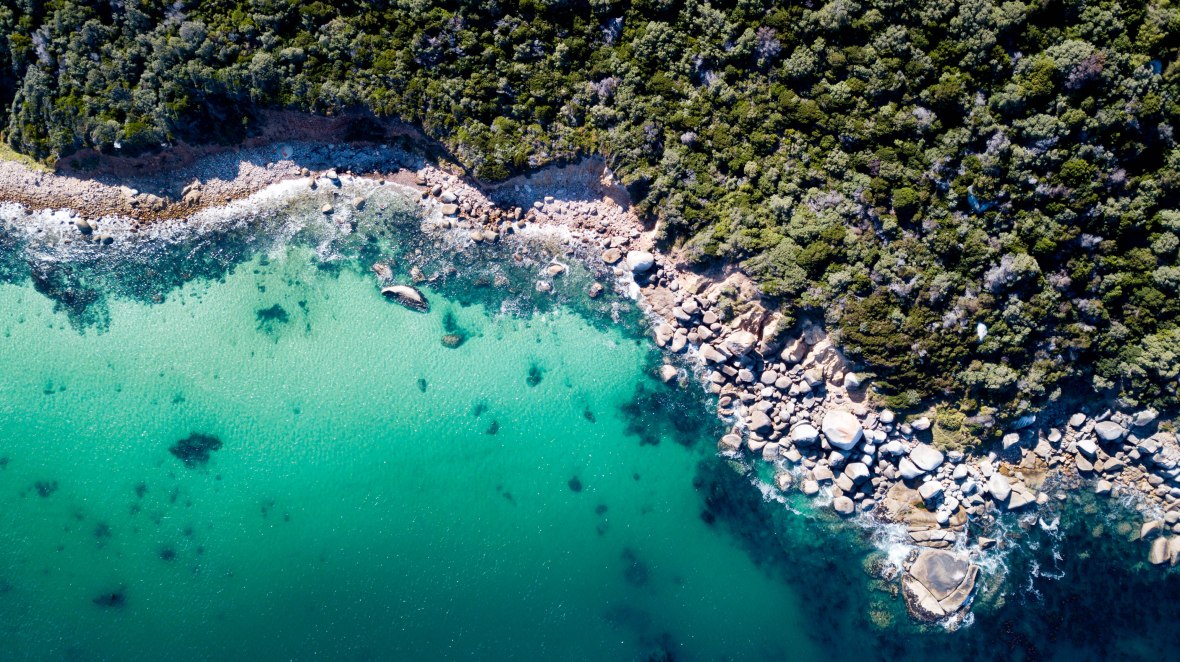 The highlight for me was probably on our way back when we stopped at Boulder’s Beach to see the penguins. I didn’t really know what to expect; my only experience with penguins in the wild was at Phillip Island in Australia, where in the evening you can watch the ‘Penguin Parade’ as hundred of penguins come out of the water, onto shore and make their way into their dug out homes. But it’s dark and you can’t take photos of the penguins. This was the complete opposite! You can rock up at any time, and there will be hundreds of penguins just chilling on the beach in broad daylight. We went a little snap-happy. 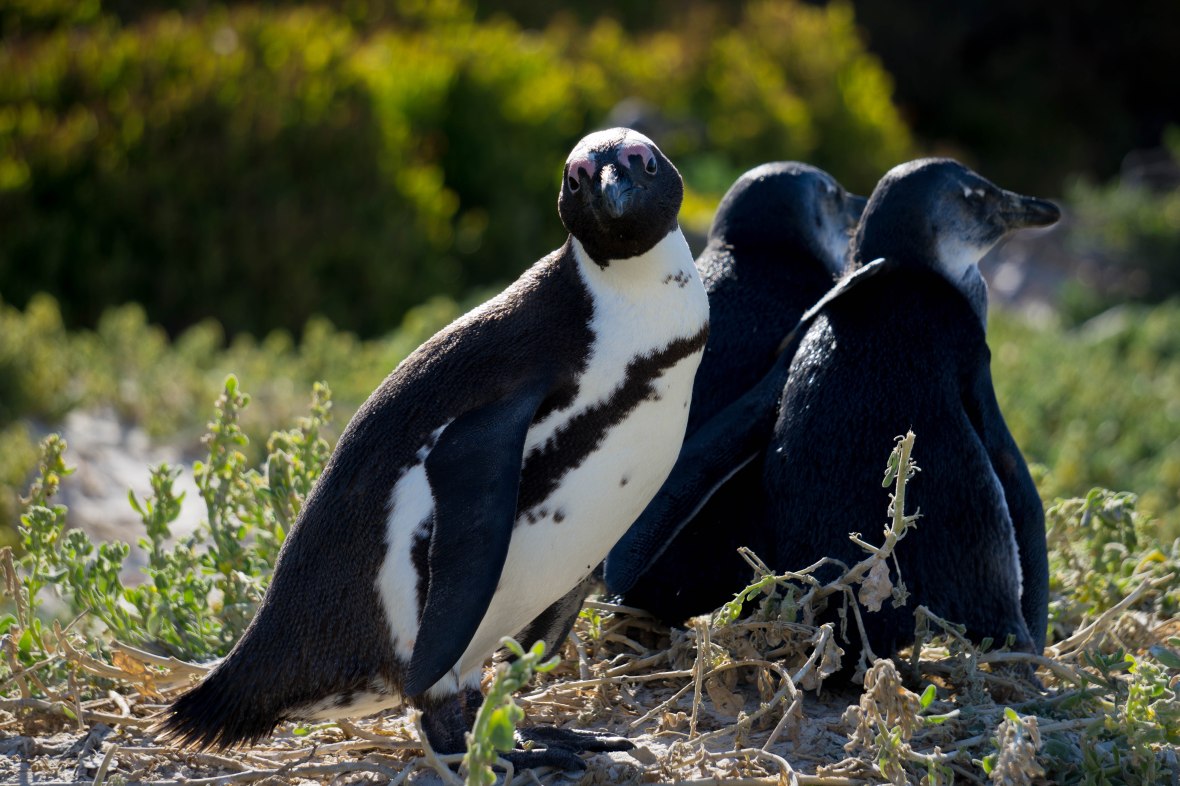 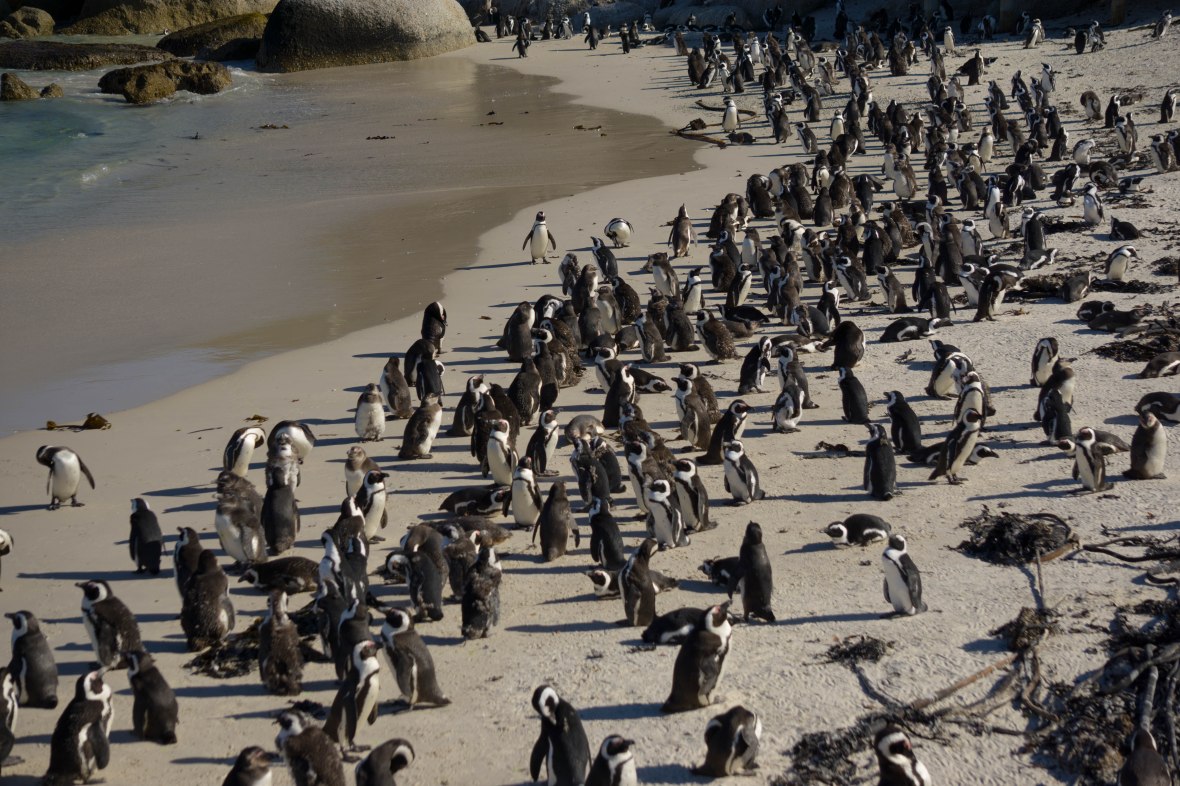 By now the stresses of the day had melted away and all was made even better when we arrived at our Airbnb, grabbed some Ethiopian food at the smallest restaurant I have ever been in and stumbled upon an AMAZING gelato place. They have a ‘surprise’ flavour every day that you can try and that flavour happened to be chai. I was actually in heaven. I planned to go back the next day and get some insta-worthy shots but sadly it was closed by the time we finished dinner. If you are in Cape Town, please go to Moro Gelato. And go moro than once (see what I did there?) since I wasn’t able to!

The next morning we made our way to the airport to pick up Ayham – the first friend (but not last) friend to meet up with us in Africa. We drove back into the city, got settled and walked across the street to Tigers Milk for some lunch. We had planned to go to Table Mountain – the weather was perfect for it – but after seeing online that there was a 2 hour wait (it was still the weekend after all) we decided against it and instead went for a massive walk through Green Point and up to Sea Point along the boardwalk.

I could not get over the size of the waves! Some parts of the boardwalk were actually fenced off because the waves were coming right up and over. It kind of reminded me of standing on the bridge at Canada’s Wonderland (perhaps the best theme park in the world) waiting for the log from Timberwolf Falls to come plummeting down and soak your clothes right through. Thankfully, we managed to stay dry.

I wanted to check out this place called Mojo Market which I’d seen a fellow blogger (Sarah @disastersofathirtysomething – she’s hilarious and her pictures are on point so check her out!) post about. My biggest regret is that I’d had an enormous burger for lunch and was so full I couldn’t sample any of the deliciousness that was on offer! They also had vendors selling locally made products which I had to walk away from before I bought anything. Ayham did manage to pick up a necklace as a souvenir for Nour though, so all was not lost.

That night we decided we would wander down Long Street to see what looked good for dinner. It wasn’t long before we came across Kloof Street House, an old victorian style house with fairy lights on the patio. We put our name on the list and sat at one of the benches enjoying cocktails and the nice weather. We moved to a table on the patio to order dinner (after a long wait and some confusion as they assumed we were going to eat our dinner from the bench) which consisted of butter chicken (Ayham), Steak (James) and Osso Bucco (me). It was delicious and rich and the best meal James and I had eaten in ages! And with all that, a starter, cocktails and a bottle of wine it was $120 AUD! We meandered home, feeling fill and satisfied.

The next morning we were set to go up Table Mountain, only when we looked out the window you couldn’t even see the top due to cloud and fog! A quick search confirmed our suspicions that (sadly) it was closed and it didn’t look like we were going up. So for Plan B, we decided to find a good spot for brunch. I found a place called the Bitches Tits (I’m not going to lie, the name got my attention!) and we walked over there.

The place was rad (is that something people still say? It seems like an appropriate word to describe how I felt about this spot). We were instantly greeted and got a brief explanation on how to order our food. The signage was cool, the lamps were cool, the staff was cool – it just had a really great vibe. (Ok, I sound like the world’s biggest dork, so here are some pictures).

We wandered around for awhile and finally came to Bo Kaap. Bo Kaap, an area of Cape Town with some of the most colourful houses you will ever see. Even in the cloudy, grey weather these houses were vibrant (it made me wonder how amazing they would look on a sunny afternoon!).

[Don’t these two look thrilled to bits that I want to take their picture?]

Before taking Ayham to the airport, we swung by the Devil’s Peak Salt River Taproom – Ayham got some dinner as he, understandably, didn’t want to eat plane food and James and I got some snacks to have with our pints.

We dropped Ayham off and made our way back to the Airbnb; I had big plans to order a poke bowl on Uber Eats for dinner (was one of my go-tos when we lived in Melbs) but sadly I was too full from my deep friend pickles at Devil’s Peak! So our last night in Cape Town was much the same as our last night in Stellenbosch – early to bed with no dinner because my eyes are constantly too big for my stomach.

I’m still sad we didn’t get to hike Lion’s Head or go up Table Mountain. I wish we had gone to Cape Point at a quieter time of day (or during the week) with our Wild Cards in tow. But all that being said, Cape Town did not disappoint as my ‘South Star’ and I will be talking about that chai gelato until I get the opportunity to visit this wonderful city again one day.