After our excitement of changing a tire in the middle of Etosha National Park (if you haven’t already, you can read about that here), we were heading south. Before Swakopmund, we booked a night at Hoada campsite to break up the drive. The sites there are beautiful – situated against big rock boulders and very private. Instead of setting up camp for the night, we opted for the tented camp which was perfect. We had our own facilities, including an area to BBQ. 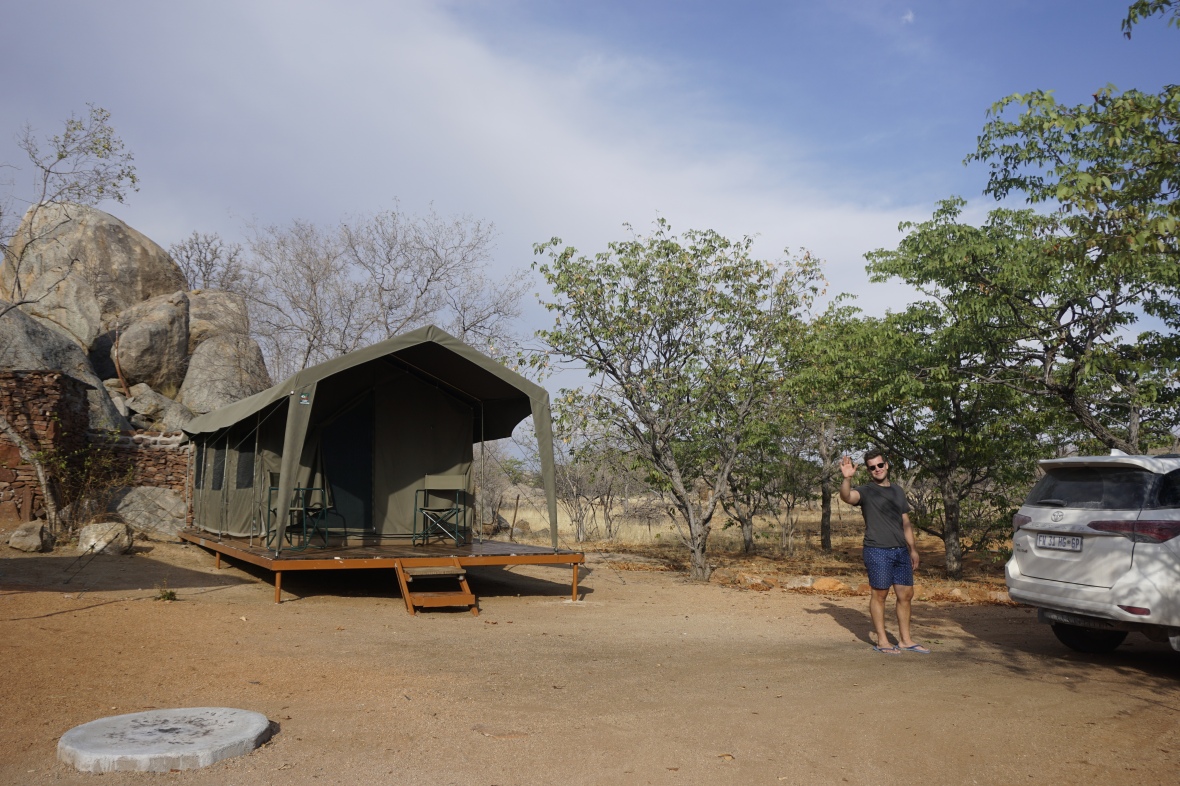 We arrived early in the afternoon and it was sweltering; after checking out the small pool, we decided to go to their partnering hotel, Grootberg Lodge. Hanging out by the infinity pool was the perfect way to spend the afternoon! If staying at the campsite, I’d highly recommend going to the lodge – it’s worth the 30 minute drive (including a very steep climb to the reception, so make sure your car can handle it!). 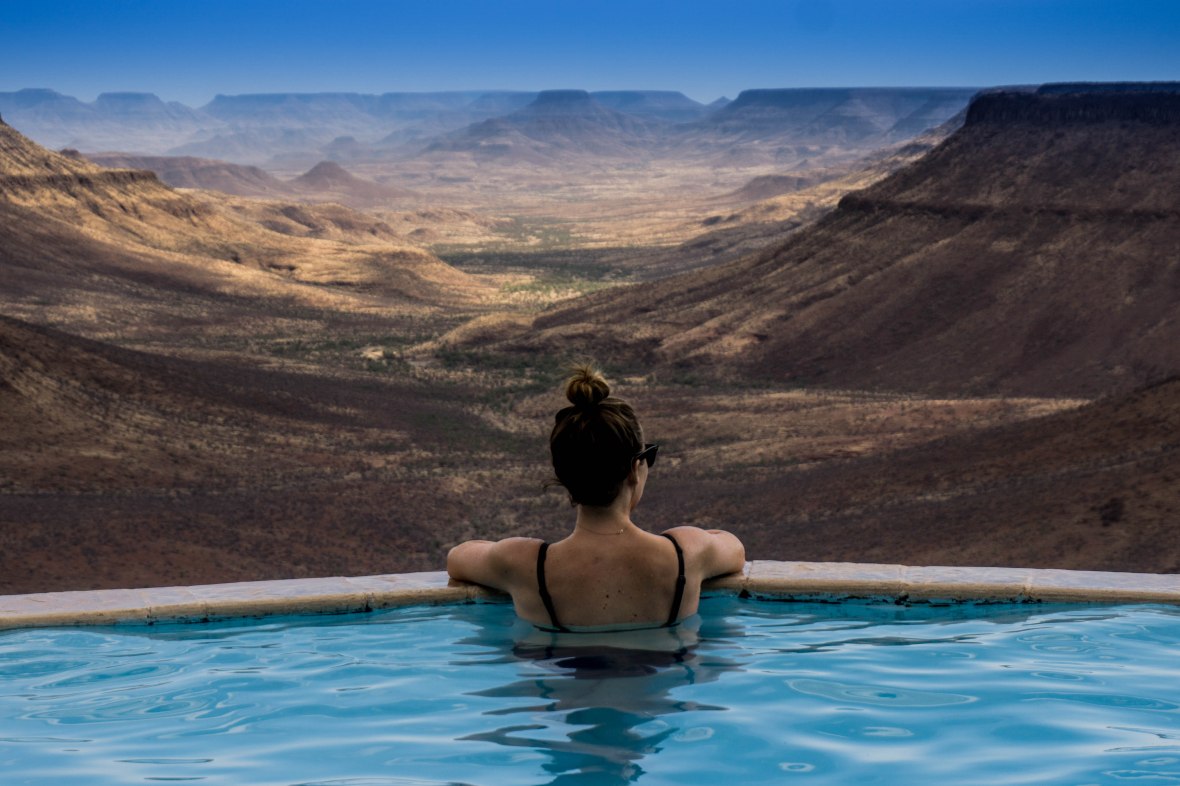 Originally, we were planning to spend 2 nights at Hoada thinking that we could check out some of the surrounding sights the next day (like a petrified forest), but after realizing that they would take 2 hours to get to due to road conditions we decided to cut our losses ($20 to be exact, since we were camping there the next night, not staying in one of their tents) and head south toward Swakopmund. To be honest, we were also looking forward to replacing our spare tire – so we hit the road the next morning.

Instead of driving the direct route, we headed to Springbok Wassan gate – one of the entrances to Skeleton Coast Park. We got our (free) permit and were on our way, after a quick word of warning; apparently the river near the exit gate had flooded and there was a ‘bit of mud’. We didn’t think much of it as we continued through the gate.

The landscape was completely incredible. As we drove, the scenery changed – first it looked like mars, and then it was white sand and totally barren, with abandoned mining equipment. 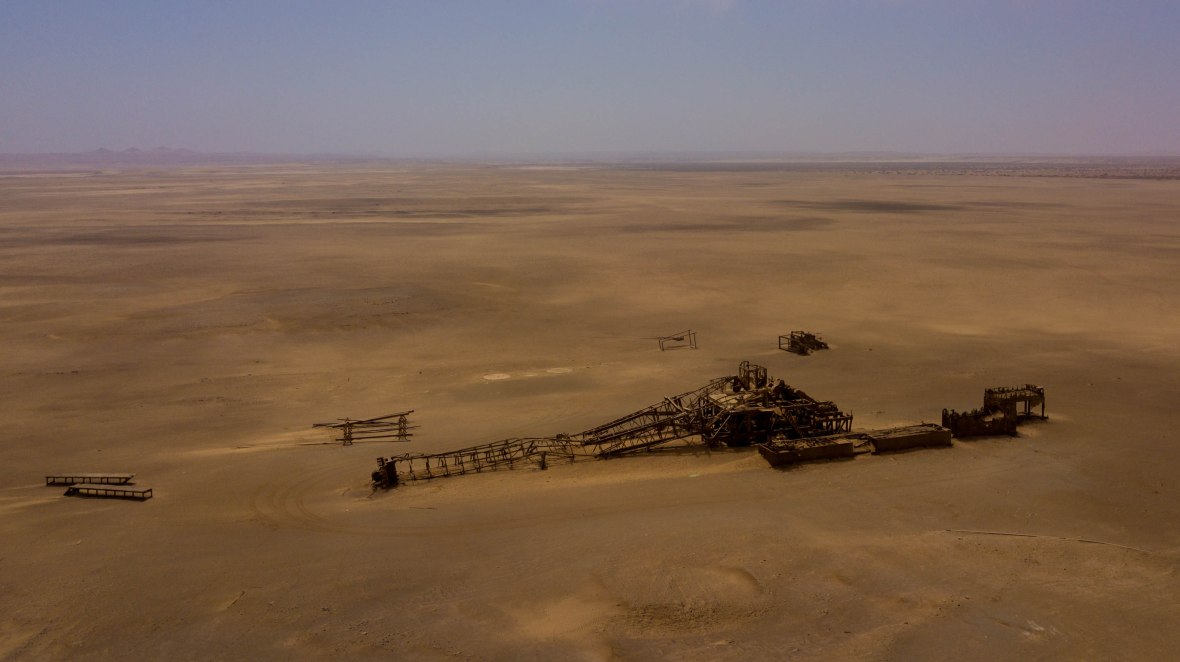 We arrived at Ugab River and saw the muddy road the guard warned us about; and yeah, it looked pretty intense. There were no other cars around so we had no idea how to approach it. The middle was water, and we couldn’t tell how deep it was. There was mud on the outside, but from where we were sitting it didn’t look so bad (I’m sure you can already see where this is going). We turned on our diff lock and James started to accelerate. It was only 10 seconds of driving before we were stuck. Damn. James got our to assess and it didn’t look great. We decided that I would move into the driver’s seat and reverse while James attempted to push us back. Nothing. After 10 minutes 2 other cars came from the other side. They did a quick assessment of our situation, and the first car drove directly through the water without any issues and through to the other side. Double damn. The second car followed, again with no issues. Now we were not only stuck, but had a nice coating of mud on the front and side of our car from getting splashed! 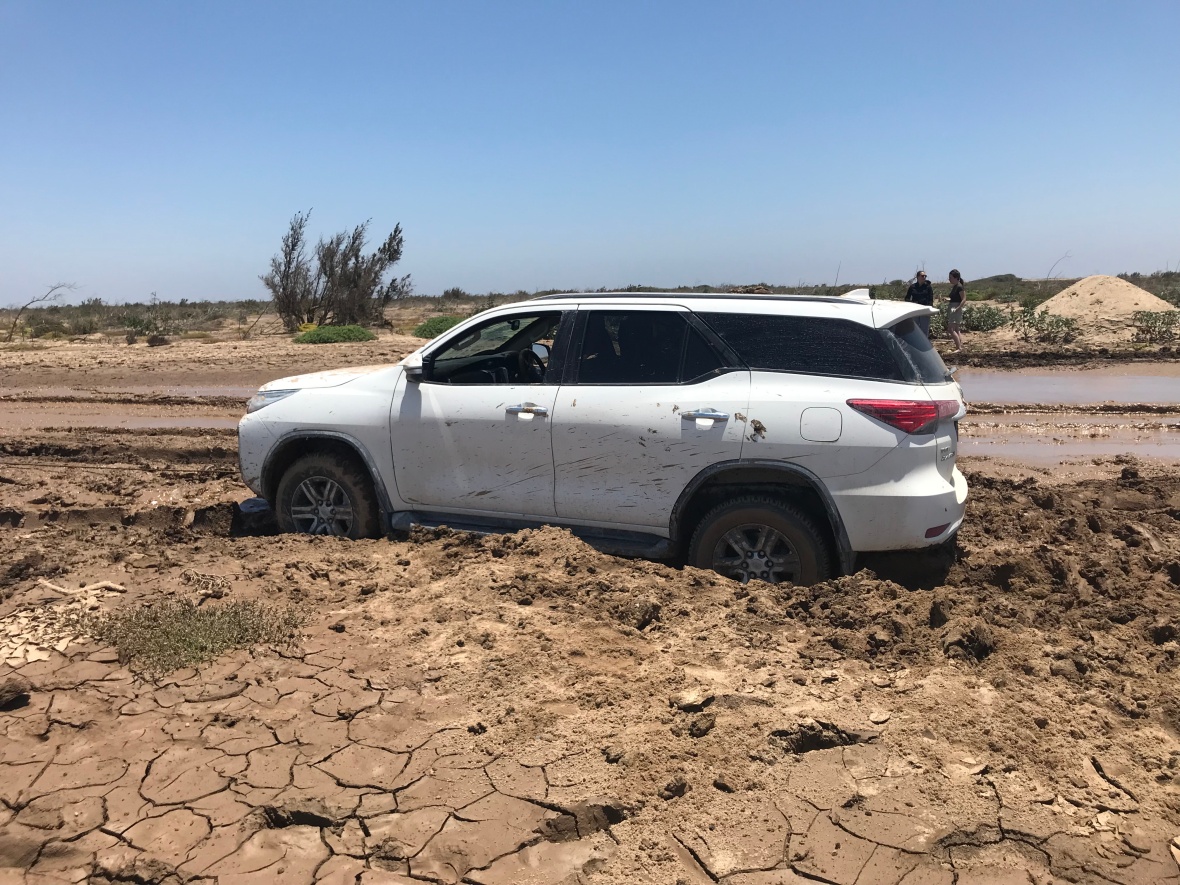 I got out and walked 15 minutes to the gate on the other side to speak with the rangers. I walked into the office and told the woman behind the desk we were stuck. She said ‘Yes, I can see that. And who will assist you in getting out? We don’t have a vehicle to pull you out here’. I asked if she had a shovel and after she showed me the way, I walked back to the car feeling slightly deflated from the lack of help. I’ll skip past the next hour which included shoveling, looking for rocks to provide traction, and generally feeling embarrassed as cars went by – all straight through the water. Eventually a lovely man – who seriously saved our butts! – showed up with his truck and said he was going to try pulling us out. He tried twice before it became clear it was going to take a bit more to get us out of this mess! Luckily a 4×4 truck was approaching and he asked them to attach their tow line to his truck, which was pulling our truck. They agreed with no issue and 10 minutes later we were out! Thank goodness for kind strangers. We weren’t looking forward to camping out there for the night.

By this time we were even more keen to get to Swakopmund – we needed a car wash, a new tire, a shower and laundry STAT. 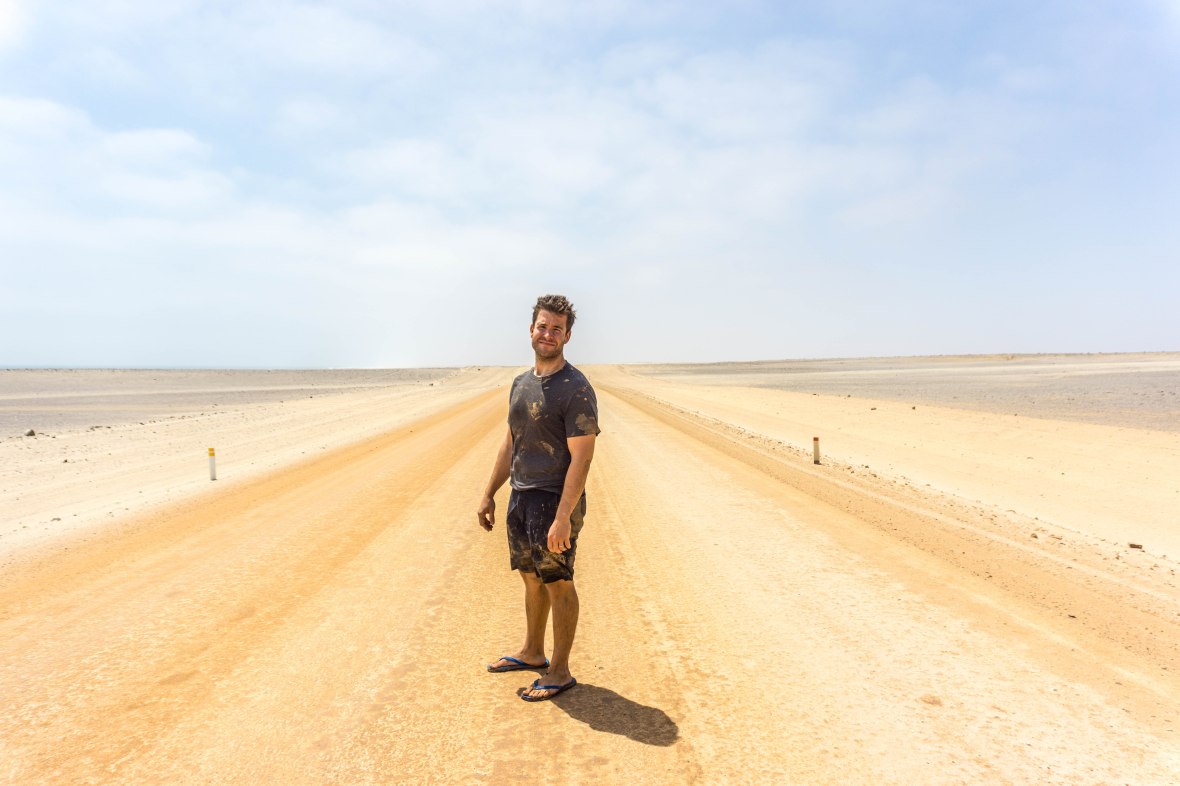 But we did get in a few stops along the way, including one of the amazing shipwrecks you can spot along the coast.

Happily, the accommodation we booked in Swakopmund could take us a day early and was a legitimate hotel with warm showers and a roof and everything. We washed up and had a restful sleep.

The next day was mostly running errands, which makes Swakopmund a great stop if you’re driving through Namibia! We dropped off our laundry to get done at Seagull’s Laundry, got a car wash, went grocery shopping and headed to TrenTyre to get a new spare.

But our second day was a great mix of excitement and relaxation. Despite the fact that neither of us have even snowboarded, we decided to try sand boarding with Alter Action. They picked us up shortly after 9 and we headed out to the dunes to get briefed and fitted for our boots and boards. Alter Action was fun and professional, and made us feel super comfortable. I didn’t turn on any of my runs, but had a great time going down the 100m dune (even if I was slow and looked really nerdy). Lie-down boarding was also super fun, and we each took a turn trying that out. One word of warning – getting up the dunes isn’t the easiest thing. Climbing a 100m sand dune 5-6 times gives your legs a good workout! 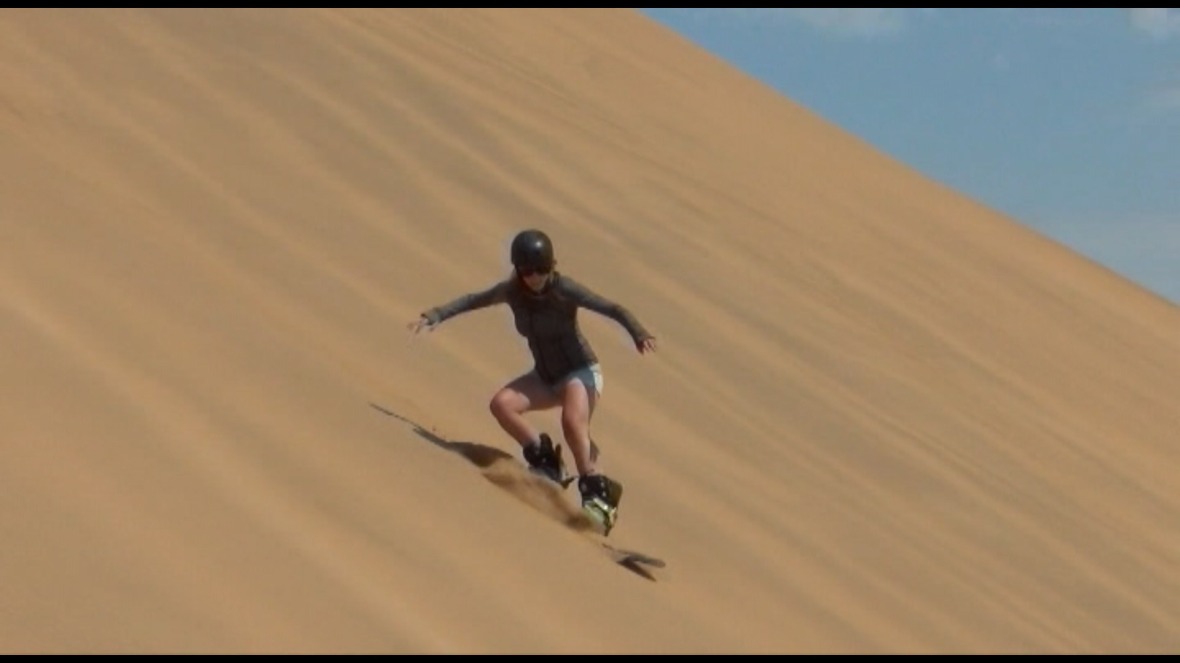 Our afternoon was the complete opposite as I had booked us in for massages at the Atlantic Spa at the Strand Hotel. No word of a lie, it was the best massage I’ve ever had! And James raved about his too. My therapist would not rest until every knot in my back, neck and shoulders was gone and she used everything from her hands, hot stones and cups to loosen up my muscles. I may have had bruises the next day but trust me it was worth it!

Our final day in Swako was spent with a lazy morning, followed by a drive to Walvis Bay where we visited the salt mines and Dune 7. 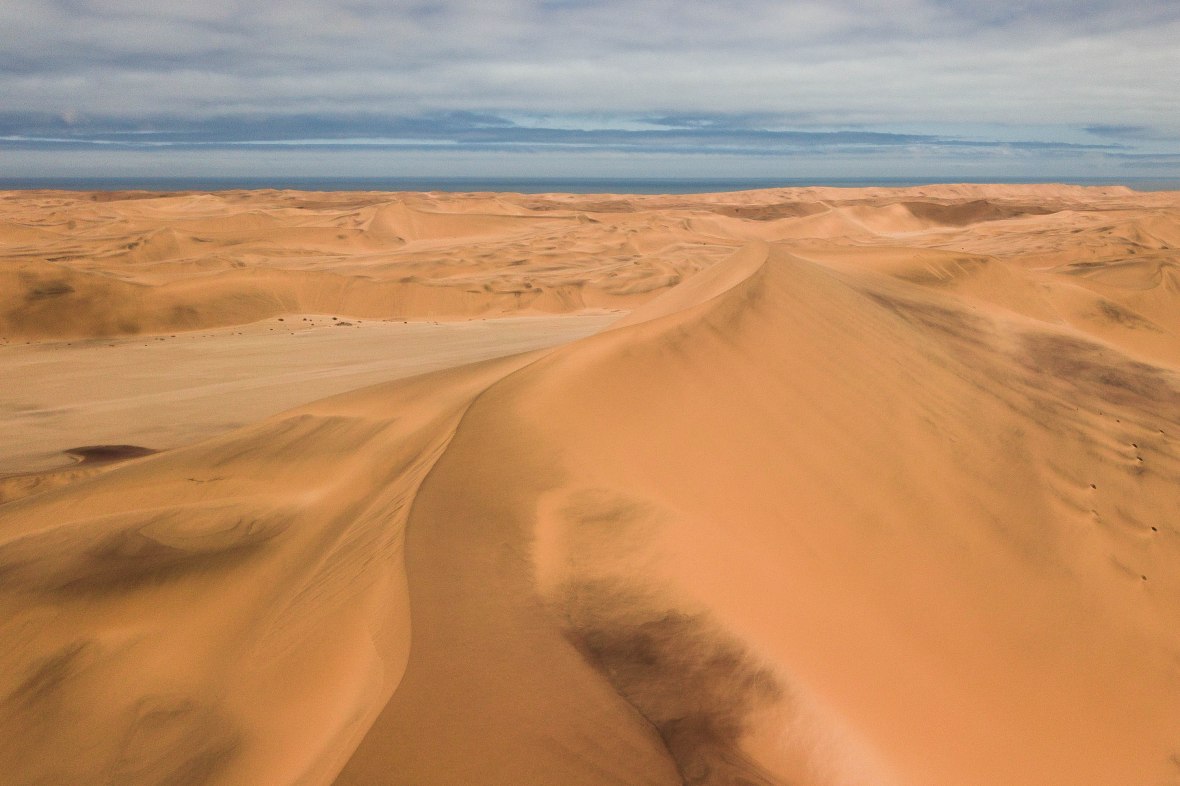 Instead of making dinner that night, we decided to treat ourselves and split from Fish & Chips from Fork’n Nice and holy moly they were good! $60 NAD for one large serving (less than $6 AUD) was great value for the delicious meal.

We really enjoyed our stay in Swakopmund – it was a much needed break for our minds, bodies and car! And if I ever come back you better believe I’ll be booking a massage followed by fish and chips!