After some down time in Belize, with a little excitement thrown in from the ATM caves, we were heading to our next destination – Guatemala, and more specifically Tikal. Since San Ignacio is so close to the Guatemala border, we knew we had to visit this infamous ruin.

And it was stunning. We opted to stay in the park and do the sunrise tour, which had us leaving at 4am hiking in the dark through the jungle, past Mayan structures that we couldn’t see and ending at the 70 foot tall Temple IV, where we climbed to the top to see the sunrise over the ruins scattered throughout the site. Unfortunately for us, it was very cloudy. So as it started to get lighter out – the only thing we could see was a sheet of fog. Everyone slowly packed their cameras away and waited for their guide to tell them it was ok to leave and begin to explore by foot.

Tikal is one of the largest archaeological sites in Mesoamerica (the term used for Mexico and Central America before the Spanish Inquisition) and was also thought to be the Mayan capital. Archaeologists think the site could date back to the 1st century, A.D., thriving between 200 and 850 A.D. before the start of a rapid decline and ultimate abandonment. Oh, and it was used as a filming location for Yavin 4 in Star Wars: Episode IV A New Hope.

The ruins are impressive, from the ground and also from above. The clouds did start to clear and our group climbed the stairs of the Palace to get a view of Temple IV, Temple I and Temple II.

We ended in the ‘downtown area’ of Temple I and Temple II which tower over smaller structures. 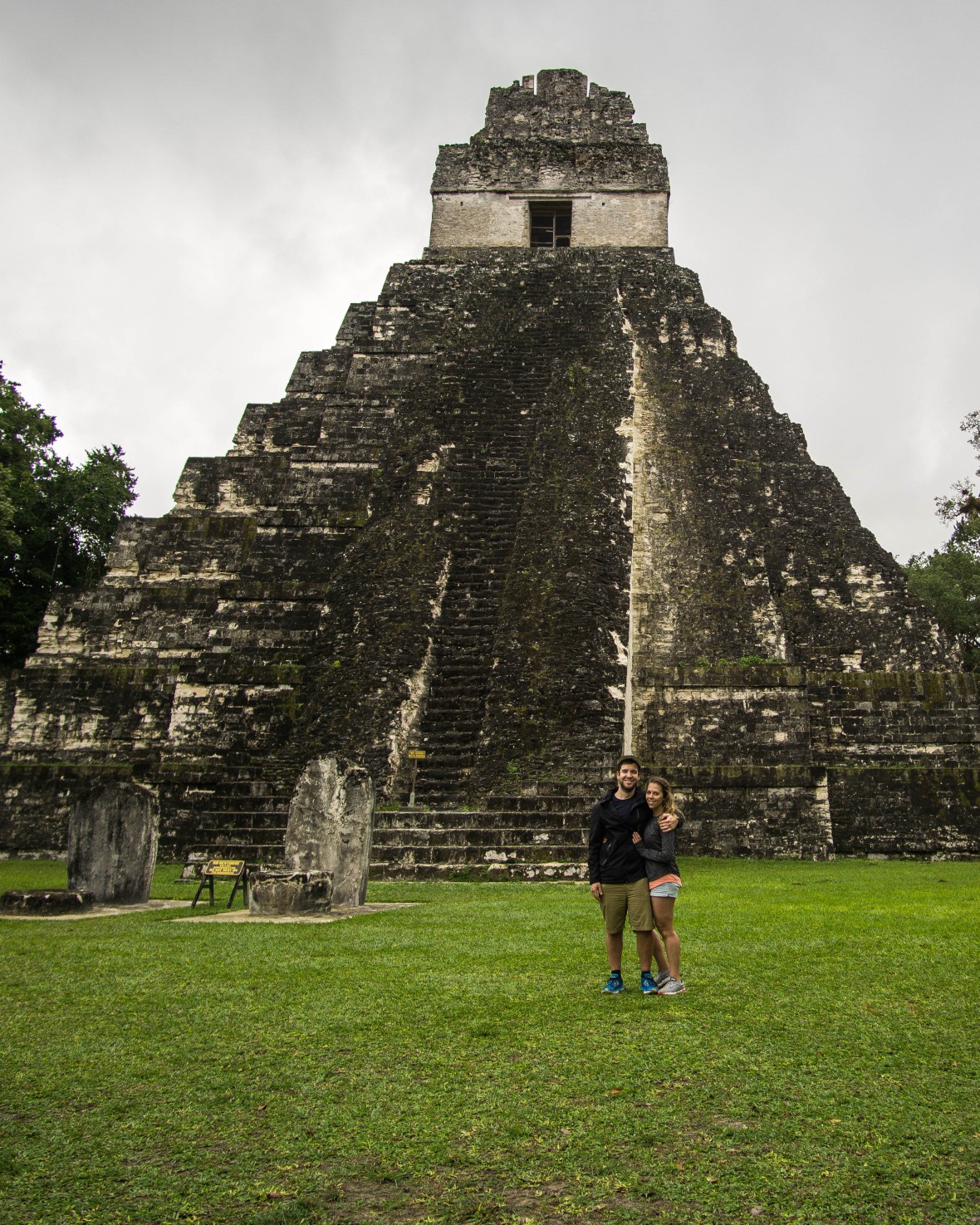 The tour lasted about 4 hours, so we were on our own by 8 am to do a little more exploring, before heading out of the park and grabbing a well deserved breakfast! And the timing couldn’t have been better, because by 8:30 am it was pouring rain.

Getting there and Away

This will totally depend on where you are coming from. We made our way from San Ignacio, and it was surprisingly easy to do it on our own (which we’re experiencing more and more while travelling through Central America!). Here is how we did it:

The collectivo from El Cruce took us straight to our lodging, Jungle Lodge Tikal and the whole trip took 3-3.5 hours including the border stop, and going to an ATM and purchasing our Tikal tickets before getting our collectivo on the Guatemala side (there’s a Banrural bank a few hundred metres up the hill after the border with an ATM – and the tellers also sell Tikal tickets – saving you a stop at the main gate).

Staying in Flores VS the park

This was an easy one for us, since we were coming from San Ignacio anyway, and didn’t have a real desire to see Flores itself. We also knew we wanted to do the sunrise tour and, while possible from Flores, it would have meant getting up an hour early to arrive at the park no later than 4am. Jungle Lodge Tikal was a great place to stay. They have private rooms with a shared bathroom in their hostel for about $70 AU per night (using Cheap Tickets). We lucked out, because though Booking.com said there was a room available, there wasn’t and so we were upgraded to one of the hotel rooms.

There are a few things to keep in mind for doing the sunrise tour – you need a guide ($), you have to pay for a sunrise ticket in addition to the daytime ticket ($), and you have to get up at an ungodly hour. We were keen, and had we actually seen the sunrise I’m sure we would recommend that everyone do it. But in the end you need to decide what will work for you and your budget – you can explore all the ruins on your own for the cost of just a daytime ticket for 150 GTQ, about $25 AU. That being said, I would still consider getting a guide for more in depth information about the city.

Paying for a Guide

If you do the sunrise tour, you need a guide. When our collectivo was dropping us off, our driver asked if we needed a guide and we said yes and so he waved one over. The guide told us that he had a group going, and it was 100 GTQ pp – we quickly talked him down to 75 GTQ. We asked how large the group would be and he said there were only 4 other people so far and so we decided to use him.

The next day, as we waited to begin the tour, the group became larger and larger until there were 20+ people in our group. It also became clear that they weren’t splitting us into English and Spanish speakers, as we had been told the day before. We were feeling annoyed but it ended up being totally fine. Our guide was fantastic, and did a great job running the tour in two languages.

All this being said, I think we would do it differently if we were to visit again. When we arrived at the entrance to get our wristbands, there were a number of guides standing around and we did see some tourists come without a guide and then go into the park with one of the extra guides. So it seems you can just arrange for a guide on arrival at sunrise and probably pay the same or less than we paid, and get a private tour. The most important thing is that you have already purchased your sunrise and daytime tickets as they are not sold at this entrance (they are sold at the main gate, some 20 km away).

How Long to Stay

In my opinion, we were able to see everything we wanted to within our 4 hour tour. We only stayed about 30 minutes on our own and basically checked our some other ruins on our way out of the park. Finishing up in the morning also allowed us to go to Antigua that day, taking a collectivo to the Flores airport in the afternoon (50 GTQ) and flying to Guatemala City.

If you’re planning a trip to Tikal and have any other questions, please reach out!