After leaving cloudy Cape Town behind, we were looking forward to driving the iconic Garden Route. A brief stop at Checkers in Tokai to stock up (btw, Checkers is totally my favourite grocery chain here) we were off to Gansbaai.

The drive to Gansbaai, though cloudy, was probably my favourite part of the whole drive and technically it’s not even a part of the Garden Route. It reminded me of Great Ocean Road with sheer cliffs dropping down into some pretty awesome waves. We were on the lookout for whales, but with the water being so wild it was hard to see anything at all!

We opted to stay at Gansbaai Town Lodge ($35 USD per night) and avoid camping in the rain. It was a great deal with a well stocked self-catering kitchen so we were pretty pleased!

The next day looked a lot more promising with the sun shining bright, and we started along the route to Garden Route National Park – first stopping at the Knysna section. I had seen the Diepwelle Camping Decks when searching for spots to stop along the way and the site looked really cool! We knew we would be arriving late, so we called ahead to see if there was availability. The woman let us know there was, and told us to just go right on into the camping area and set up when we arrived – we would be able to pay the following day.

The road into the camp is weird – you go through a bit of a slum and finally see the forest line. We drove up to the site and realized we were the only ones which I, initially, took to be a huge positive. We could choose any site we liked! We would have peace and quiet! What could be better than being in the middle of the woods all by ourselves?! We made a nice dinner and not long after hopped into our tent. It was the coldest night we’d had in Africa by far, going to 7 degrees overnight and we huddled together to stay warm. Lying in the tent reading before bed it suddenly dawned on me that we were the only ones at the campsite. We could hear people from a village nearby, and a group of people that sounded like they were walking around in the forest. It’s amazing how perceptions change from day to night. Suddenly having our pick of sites wasn’t feeling like such a benefit. Around 2am we awoke to the sound of a small animal rustling around under our camping deck that woke us up 3 more times before 3am. Eventually we fell back asleep until morning.

The next morning was clear and bright and the worries from the previous evening faded away as we packed up the car. Staff were walking around the park cleaning the sites. Hikers were driving into the camp site parking lot to embark on the Elephant Walk. All was right with the world. 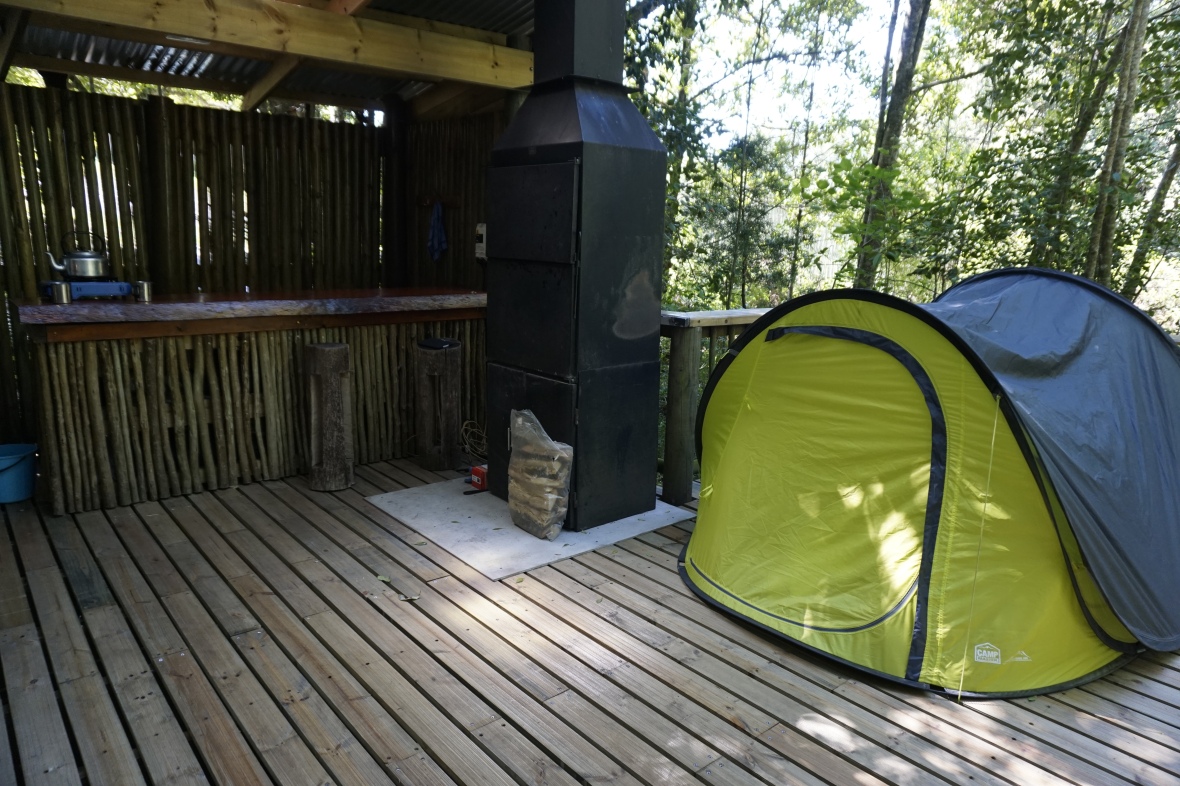 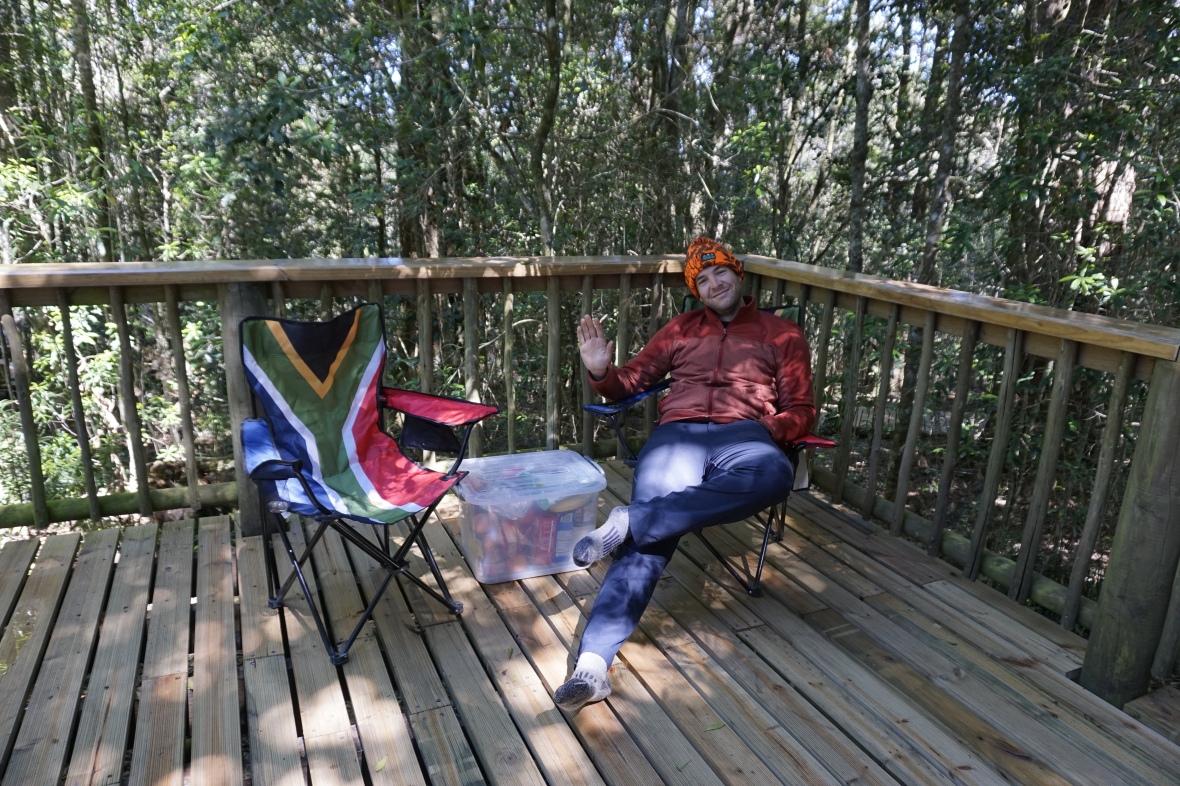 We had some breakfast and headed unto Plettenberg Bay for a coffee (and to stop at Pep to grab some $6 blankets for the coming nights, just in case they were as cold). We had croissants and coffee at Le Fournil de Plett bakery and were soon back on the road.

We were spending the next two nights at Storms River Mouth in the Tsitsikamma Section of Garden Route National Park. This was far and away my favourite campsite so far! The sites are right on the ocean and you fall asleep and wake up to the sound of crashing waves against the rock. Better still, you can see whales! We would watch whales splashing around out in the ocean every night during dinner and in the morning while eating breakfast. Unfortunately the park is a no drone zone, so we weren’t able to get any shots. Still, it was pretty incredible.

After our first night, we woke up bright eyed and bushy tailed ready for a hike. We decided on the waterfall hike which was 8kms roundtrip from our campsite. Though it wasn’t a particularly long hike, it was quite strenuous as a large portion of the hike consists of climbing up and over large rocks, or walking on uneven small rocks (which is challenging for the less coordinated, like myself!). It was a beautiful hike, and well worth it. Plus our legs were quite sore the next day which, for me, always marks a successful hike 😉 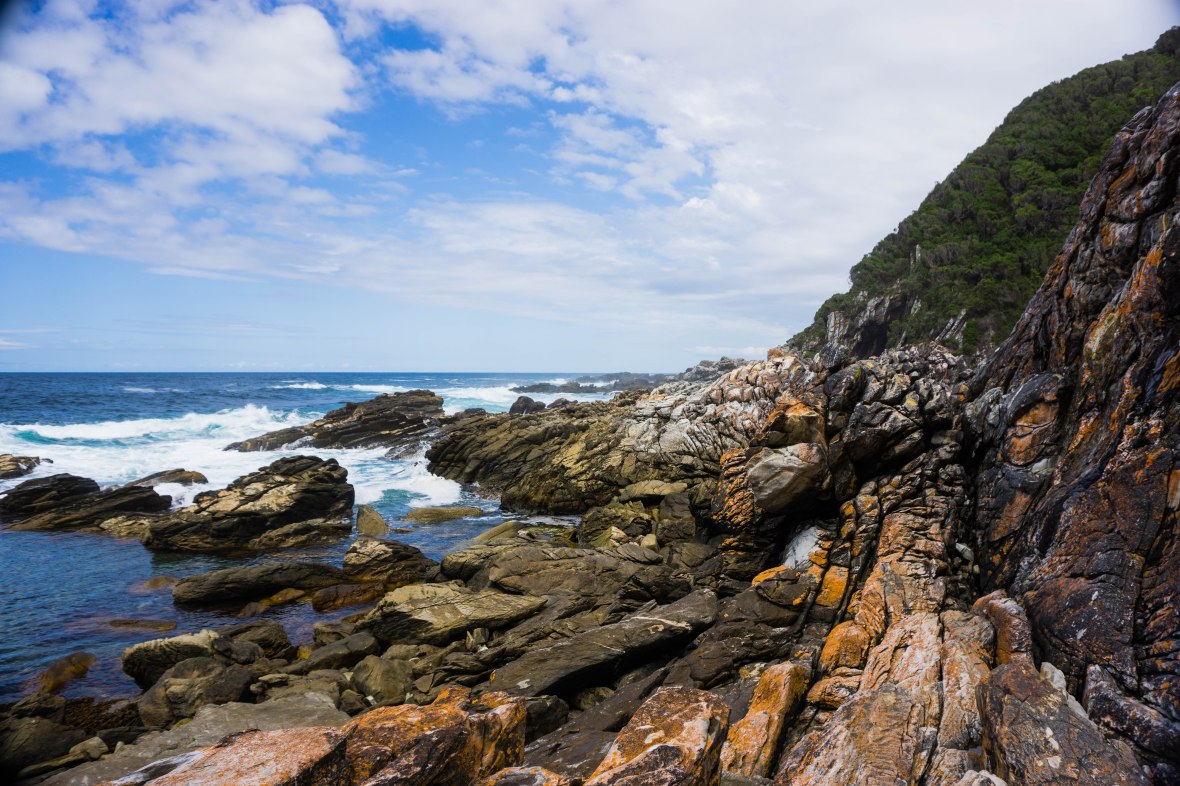 We had a relaxing afternoon researching the next leg of our trip and whale-watched as the sun went down. All in all a pretty spectacular day.

The following day we were heading to Addo Elephant National Park (yay!) but first we decided to go on a morning hike (walk) to the suspension bridge and try out our newly acquired tripod.

As far as drives go, I wouldn’t say we were blown away by the Garden Route (we must be spoiled with the scenic driving we’ve done!). However, Garden Route National Park is beautiful and Storms River Mouth is a must if you are ever visiting this part of the country.

Next time on the blog, adorable baby elephants in Addo Elephant National Park! ❤