I have to say, after a few days in the jungle I was ready for a real bed, four walls, and a warm shower. Our stop in Nadi was a bit of a necessary one before heading to Taveuni and we picked a pretty vanilla spot to stay: The Hilton on Denarau Island.

We were only there for 2 nights and 1 day, so not a whole heck of a lot to report. When we arrived we realized you had to pay for WiFi, but James figured out that the Hilton reward program members (H Honours) got free WiFi so he quickly signed up for the program and got the code which we used on all our devices during our stay – score. We were also pretty keen to do laundry but it was expensive, as they charged per piece (heck, underwear was $2.50 per piece!) so we decided we would try our luck in town the next day.

We woke up, had a quick workout and then grabbed the $1 Westbus into Nadi. It takes you right to the market, which was our first stop. By then I was really hungry (this will be an ongoing theme). I had read in a blog that you can get roti outside the market for $2. After a few circles we came to an area selling chicken curry rotis for $3 FJD so we each grabbed one. A few stalls down, they were selling beef for $2 FJD so James tried that one as well. If you’re ever in Nadi at the market and you eat red meat, go for the beef. A lot more meat and that flavour was great! 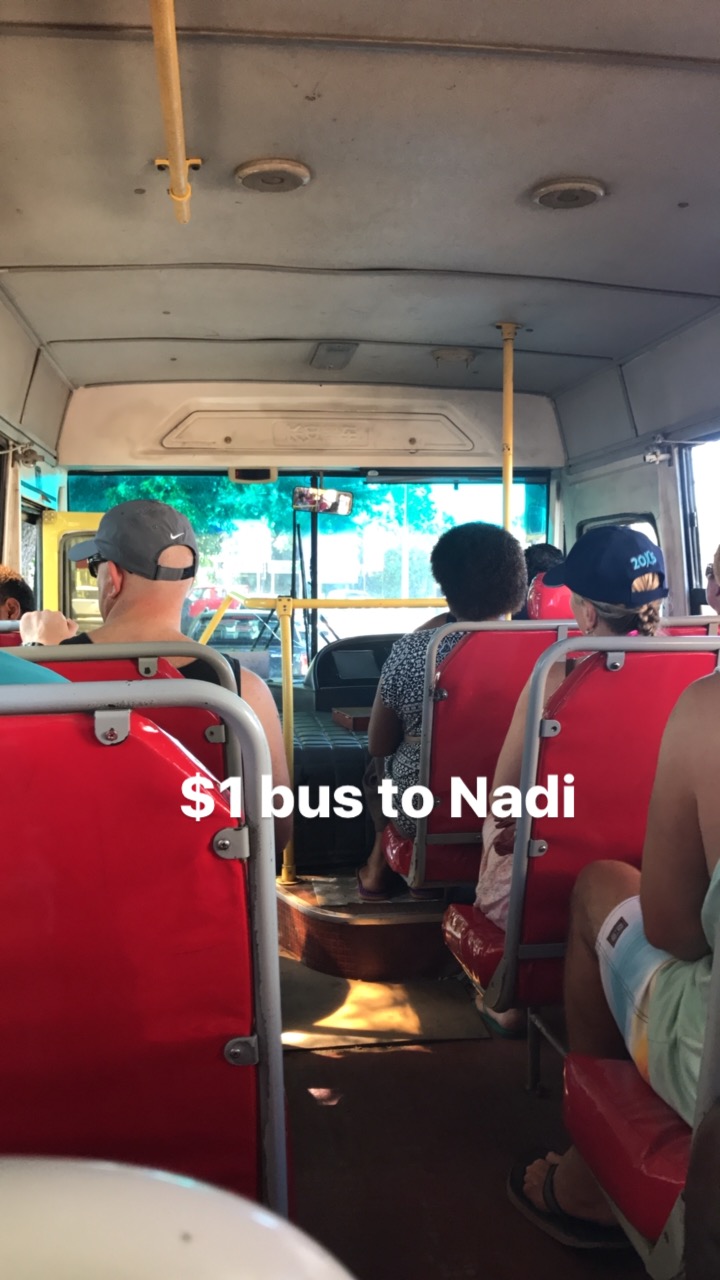 After the market, we walked the strip and soon realized we were out of luck with laundry. We stopped by the supermarket to get some beer (who wants to pay Hilton prices?) and I found a $1 laundry detergent bar which I picked up. Our room had a very large bathtub, so I figured why pay for laundry when you can do your own? A half hour later, the clothes that needed washing were out drying on our balcony. I tell you, 11 days in and I’m a changed woman.

The night, we headed to Port Denarau Marina to see what looked good. We weren’t super hungry (we’d also picked up some beef rotis to take back to the hotel for lunch, as well as a few apples from the market) so decided to grab some apps at Nandina Authentic Fijian Cuisine. I was keen to try Kokoda, a traditional Fijian dish with raw fish marinated in lemon and served in a coconut milk) so we ordered an appetizer size of that, a green salad and some pork ribs. All of the food was delicious, and the people around us that ordered larger dishes also seemed quite pleased! We liked this place as it was still on the water but away from the larger crowds at Lu’s and the Hard Rock Cafe (believe me, we weren’t going anywhere near that place!).

The next morning we set off for the airport to fly to Taveuni. The concierge tried to tell us they only had $45 taxis from the hotel (the taxi in was $30) but after we asked a few times they ordered us the $30 taxi no problem.

When we arrived to check in, they not only weighed our luggage but also asked to weigh us holding anything we were carrying on, so I had a pretty good feeling it was going to be a small plane. It was much smaller than I’d thought! It was a 19 seater prop plane. The 2 captains gave the safety briefing before take-off and left the door to the very small cockpit open the whole time. Gladly, we aren’t nervous flyers so it made the experience that much better! We arrived in Taveuni at hour later, and were greeted by the driver for our accommodation there: Dolphin Bay Divers Retreat.

When we started planning out this trip, we decided we’d like to get PADI certified. What’s funny is that a year ago neither of us had much interest in diving, but after an impromptu explore dive on the Great Barrier Reef last year we both loved it! We have done a few more explore dives since, but figured it was time to take the next step. Initially, we weren’t sure where we wanted to dive and were tossing up between Bali and Fiji. After reading the diving in Fiji was, on the whole, better we settled on that. Then it was a question of where in Fiji. There are a lot of dive shops and the country boasts some of the best dive sites around. When I was researching, I was working with a girl whose husband is Fijian and she recommended Taveuni – where he is from. The diving and also the island looked stunning so I set out on finding a dive shop. There were two that I came across – Taveuni Dive Resort and Dolphin Bay Divers Retreat. Both had excellent reviews, but after comparing experience and cost we settled on DBDR and I’m so glad we did!

Our 20 minute drive from the airport brought us to the Flying Fox – Dolphin Bay’s transportation boat – where we were greeted by Dom. We arrived at the resort 20 minutes later where Fiona greeted us on the beach with a smile and got us set up in our Bure. The whole team at DBDR was fantastic. The food Martina made for lunches and dinners was some of the best we’ve had on this trip. Almost each meal came with a beautiful green salad filled with watercress, scallions and other fresh vegetables. After a week in the South Pacific we realised how hard it was to come across fresh veggies and were pretty pleased to have some greens! Fiona was so friendly and helpful. Eso always ensured we had what we needed at meal time. And Zoe, who is also a dive instructor there, was an absolute pleasure to talk to. Even prior to arrival, most of my interaction was with Viola (one of the owners) and before getting there I already felt like I knew her! Unfortunately we missed her as she was in Germany visiting her father. And Roland (her partner, owner and dive instructor) was very informative about anything dive related, and really just a lot of fun to chat with at meals. 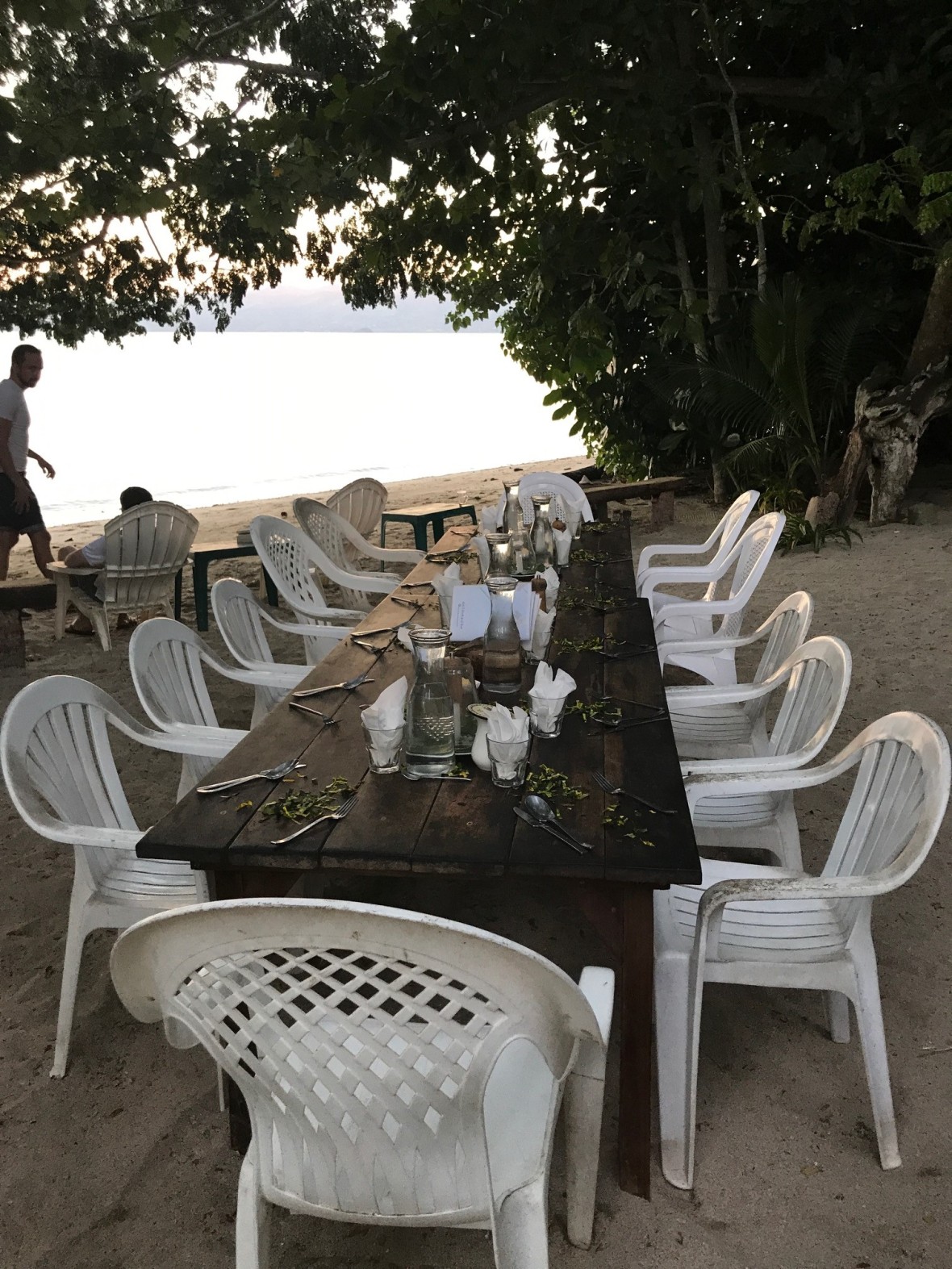 The most people staying at once was on the second day, where there were four couples including James and I, otherwise it was 4-6 of us in total. Meals are family style and dinner is typically set up on the beach (weather permitting). We met such wonderful people on our 5 days there and had some of the most interesting dinner conversation I’ve had in a while. Dolphin Bay seems to attract people that are after interesting and authentic experiences. People aren’t concerned about having short and cold showers, or bugs in their bure (pretty much inevitable on this side of the world!). Everyone we met was friendly, genuine and down to earth.

Now onto the diving! Alice was our instructor for the open water course and she was absolutely brilliant! James and I were thrilled that it was just the two of us doing the course as we had more 1:1 instruction and also got through the skills portion with ease. Before arriving, we completed the theory portion of the course through e-learning which I can’t recommend enough for anyone looking to get certified. It meant that instead of arriving in paradise and watching the other guests go off diving while you are looking through slides and answering questions for a day or two, you do a quick review and get in the water right away. We finished all the surface skills on the first day right off the shore in less than 2 hours which was great because it meant we could move onto dives! Alice was encouraging, informative and generally made us feel really comfortable.

The second day we completed two shore dives where we practiced some of the skills at depth (losing your regulator, sharing air, and my personal favourite – taking off your mask) but for the most part we were actually just diving and Alice was pointing out interesting coral, fish, nudebrinks and anemones all the while. We also saw a unicorn fish, bat fish, upside down jellyfish, male stingray and regal angelfish on our shore dive.

On day 3 we were ready for the boat. Rainbow Reef is a 10 minute boat ride from Dolphin Bay so you complete your first dive, head back for some tea and cookies and then head out for dive number two. We saw garden eels on our first dive, which looked like something straight out of Beetlejuice! This is where we also saw 3 spotted eagle rays which were swimming in formation around us – so cool (below)!

And on the fourth day we decided to go out for some extra dives. These were the most fun since we had officially graduated our course and could really just enjoy. We went out to 2 sites on Rainbow Reef; The Ledge and Fish Factory. We saw sea cucumbers, triggerfish, fire dart fish and oriental sweetlips. On our second five, in addition to seeing hundreds of fish, we saw a reef shark and 2 lionfish which were so neat (below)! 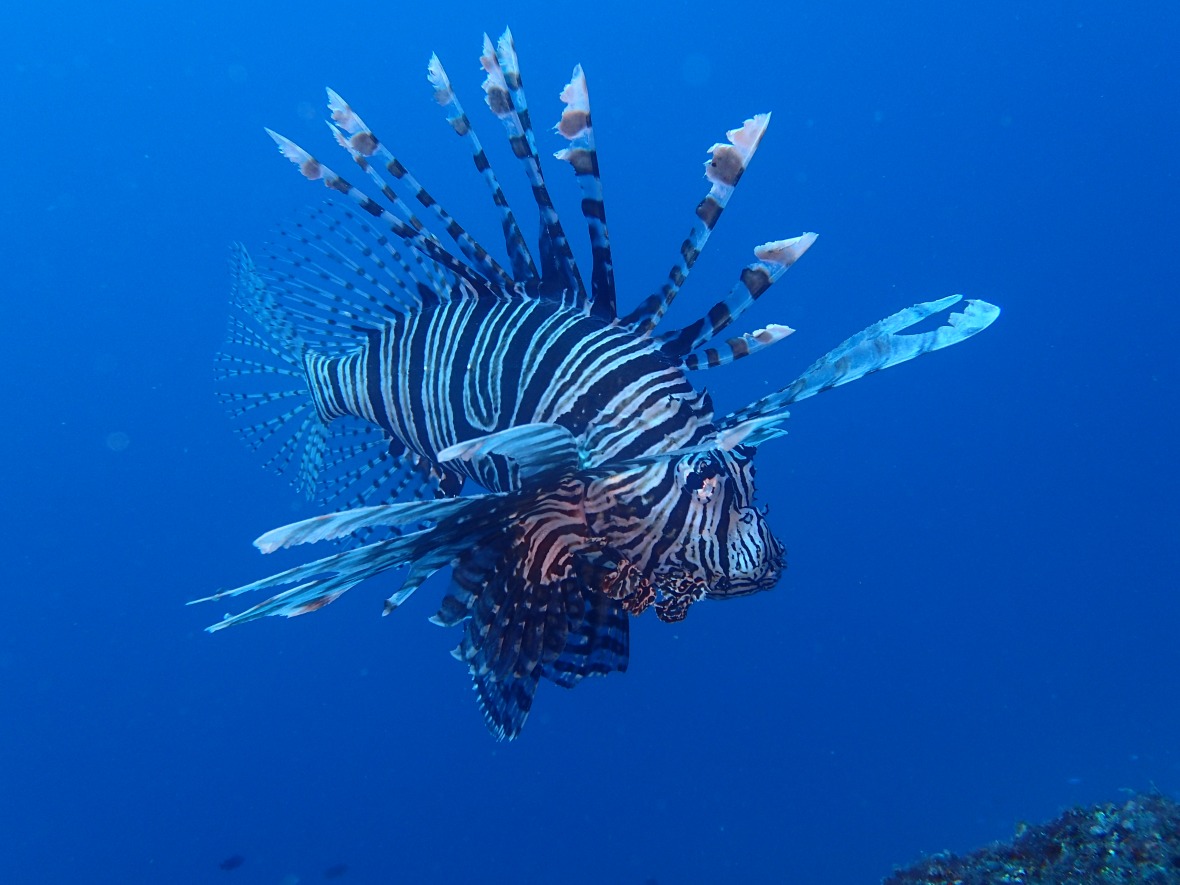 That afternoon Alice held a yoga session on the beach, and for dinner we had Lomo – chicken and vegetables cooked in the earth. On the whole the food we had here was delicious but this was our favourite!

It was sad to leave the next morning. We were only there for 5 nights, but it was the longest we had stayed in any one place since so far and I’d grown accustomed to the routine: busy mornings diving, lazy afternoons in a hammock with a good book and amazing dinners on the beach in the evening. But our next country was waiting for us. Plus, I wouldn’t be surprised if we come back to visit Dolphin Bay at some point. By then maybe we’ll be Dive Masters 😉

One thought on “Fiji: Denarau and Taveuni”