It’s a frequent question in Nicaragua: Leon or Granada?

We were surprised that we didn’t connect with Granada as much as we thought we would – though it is a very beautiful city. It’s more touristy than Leon, with tour operators chasing you down on every street corner asking if you want to see an active volcano, or go to a lake (we found Leon a little more subtle). If I had to choose one, I’ll be honest – it would be Leon. BUT Granada has a lot to offer and makes a great stopover on your way to Ometepe.

In 24 hours we walked around the city, went to an artisanal market, saw an active volcano and ate some of the best meals we’ve had in Central America to date; here are our highlights.

We made our way to Granada from Jiquilillo – far from a direct route! Most people coming from the north would be coming from Leon or Managua which are much simpler. That being said, buses in Nica are straightforward and cheap, so it didn’t take much effort.

Jiquilillo to Chinandega
Time: 1 hour, 45 minutes
Cost: $1 US for chicken bus (each), $1 US for taxi from El Mercadito to El Bisne

We grabbed the 7:00am chicken bus that goes through Jiquilillo honking to alert you of its impending arrival. I’m happy to report it was far less crowded than the bus we took to get to Rancho Esperanza and about 90 minutes after boarding we arrived to the busy El Mercadito. We quickly hopped in a taxi to take us to the other terminal, El Bisne.

It was easy enough to find a microbus going to Managua. Once in Managua you need to transfer from the Mercado Israel Lewis terminal to UCA. The cab drivers will try to gouge you here and we walked away from our fair share before one agreed to take us for $3 US.  Note, you can also go through Leon, but why bother with the extra stop?

Getting to the UCA is a bit overwhelming. Before the taxi even stopped we had about 6 men outside opening the trunk and trying to grab our bags. Apparently there are 2 companies that run buses to Managua that are quite competitive. I don’t think they differ much in price or quality, and we were too tired and hot to fight and so just went with the guy that managed to grab our bags. The great thing about this bus is that it drops you right by Parque Central, which was conveniently 500m from our hotel!

Where to Stay in Granada

We stayed at Glifoos Hotel, which was comfortable and in a great location. We had a private room and bathroom (I don’t think they offer dorms) for $30 US a night. The owner was super friendly and kept profusely apologizing for the slow internet (which is usually lightning fast according to him).

What to Do / Where to Shop in Granada

You could easily spend a whole day just walking around the city snapping pictures. The Spanish colonial style buildings are really beautiful! We spent a morning walking around, eventually making our way to the waterfront (which was not that impressive).

We decided to get out of the city for the afternoon and caught a bus to the nearby Masaya (Local) Market (for less than $0.40 US each). The local market was a bit overwhelming but eventually we found the artisanal (souvenir) area (I had my sights on a bag in the city and wanted to see if I could find anything similar).

This would be a great place to pick up souvenirs, but since we travel pretty light we left this market and walked to the craft (tourist) market, just 10 minutes away near Museo del Folclor. There were a lot of tourists at this market, and it’s not hard to see why! The souvenirs were much nicer here, and the selection of leather goods was impressive. I was nearly swayed to buy a black leather backpack (originally quoted at $45 US and soon reduced to $28 as I walked away), but was still thinking about the bag I saw in the city so walked out empty handed. What I will say is that we saw a lot of similar goods stall to stall, which made it feel fabricated (excuse the pun) but the prices can’t be beat.

If you are interested in picking up something special, there are a few stores in Granada near Cafe de Arte that sell artisanal goods. The bag I loved (and ended up buying) was from a store across the street from Cafe de Arte that does not have any markings beyond “Artesania” beside the door. There was only one of the bag I was interested and as I tried to bargain, the guy manning the shop had to call the maker to get his/her approval. It was listed for 1,800 NIO ($58 US) and I purchased it for $45 which I was happy to do since it is real suede, well made and hand stitched.

Because we are apparently volcano-obsessed, we decided to head from the craft market to Volcan Masaya. We weren’t quite sure how to get there, but it couldn’t have been easier!  There was a bus terminal less than 10 minutes from the craft market heading toward Managua. We let them know we wanted to get off at the volcano and they alerted us when we reached our destination. The cost for the ride was $0.60 each.

Once we arrived at the gate, we were asked if we needed transportation to the top and told it was $3.25 US each for entry and $3.25 for private transportation. If you are keen on seeing an active volcano and not much of a hiker, this is the activity for you! For $6.50 US you will have a pick up truck drive you straight to the top where you have 10 minutes to look around and take pictures. We saw a whole lot of smoke and little else; if you’ve never seen an active volcano I would highly recommend doing this in the evening so you can see the lava. You can go at it on your own or take one of the many tours from Granada. If you want to go during the daytime and have a few hours, I believe there are also a number of hikes up to the summit.

Once we had finished, we walked back down to the main road and flagged a microbus headed for Granada. We let 2 or 3 go by that were really full (people standing) before getting on one. We were waiting all of 5 minutes, which tells you how frequently they pass and paid $0.80 US each.

Full disclosure, we didn’t do this but I’m including it because I still regret it! James and I headed over around 5:20pm (40 minutes before sunset) hoping to get some lovely golden hour pictures. Unfortunately as we climbed the cathedral steps we were informed that access to the bell tower stops at 5:00pm. Bah! As we were only there one night we missed our opportunity (we were leaving before it opened the next morning). Don’t make the same mistake and ensure you get there in time. It will set you back $1 US for beautiful views of the city.

Where to Eat in Granada

We had some of our favourite (though more expensive) meals in Granada. We didn’t go to any of the higher end restaurants (though from what I understand, they are well worth it) and did visit two of the most popular, which ended up being delicious.

You will read about this cafe in every gringo blog post you see on Granada. Initially this made me not want to go there, but I’m so glad we did; there’s a reason it’s popular. We both had the delicious bowl shown below (though the pancakes and nutella toast options on the menu were speaking to me) and we were not disappointed! I also had one of their signature smoothies.

An added bonus is the shop attached to the cafe, where you can browse locally made handcrafts while you wait for your breakfast.

It wasn’t the cheapest breakfast we’ve had at $18.50 US but it kept us full until dinner!

I don’t know what it is, but I have been loving falafel lately! I blame it on the falafel we had in San Pedro La Laguna in Guatemala, which I am still dreaming about. Regardless, James and I decided to try out Pita Pita and it was freaking delicious. We ordered the best fattoush salad I’ve ever had and the watermelon mojitos weren’t too bad either. 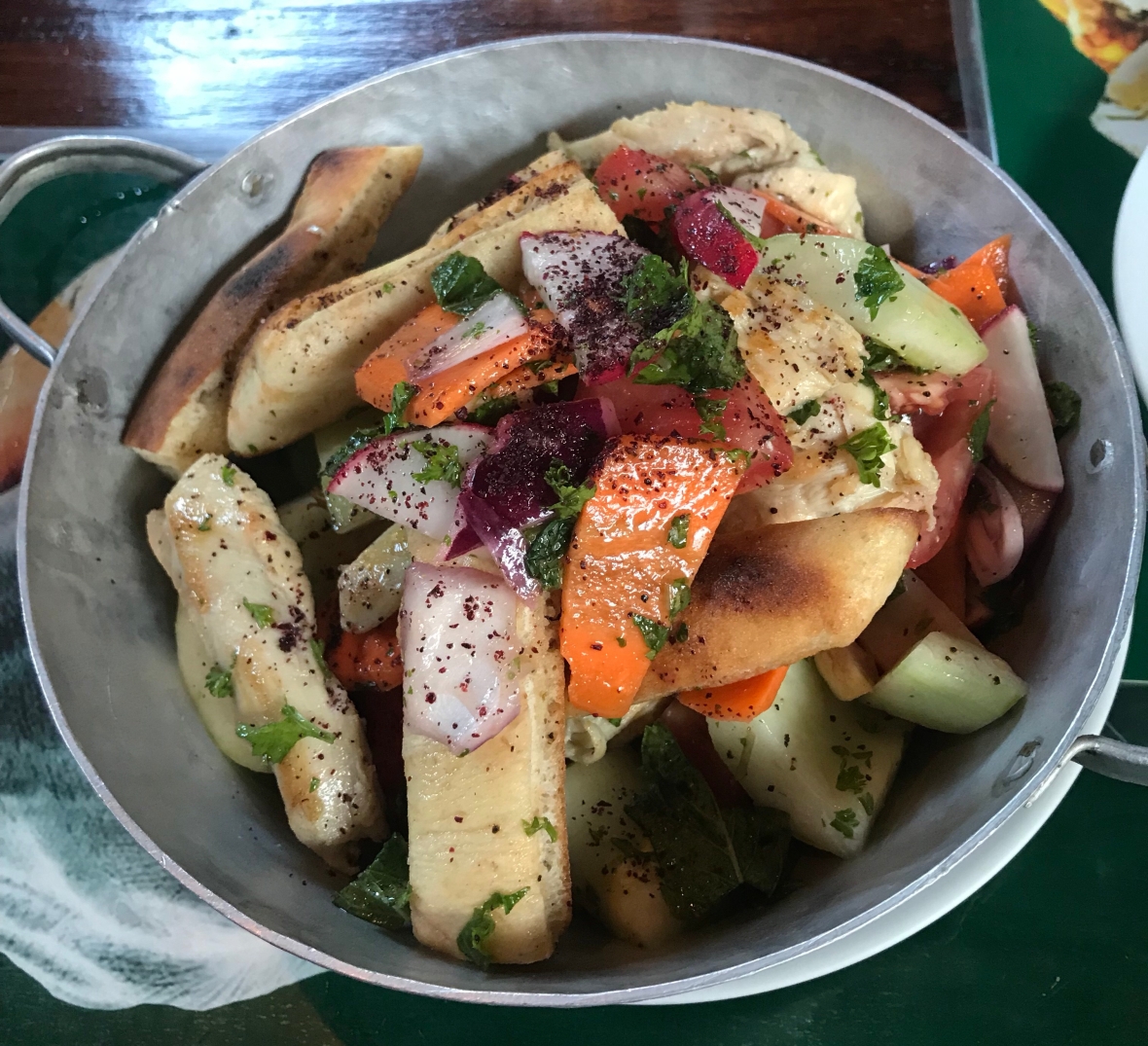 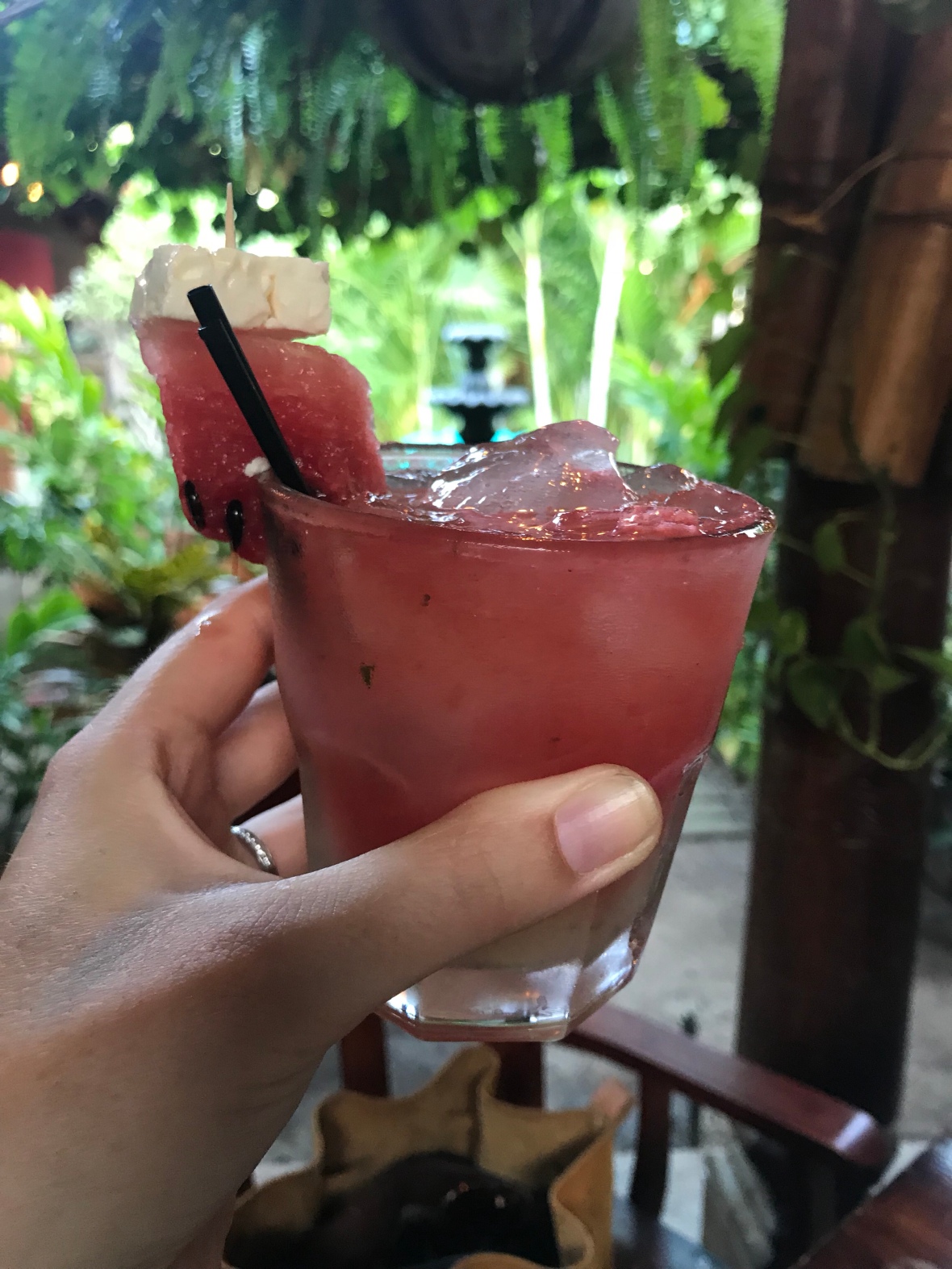 Granada was the perfect stopover on our way to Ometepe, even if for only a day or two! Have you been to Granada? What did you think?