The Danakil Depression, located in the Afar region of Ethiopia, has been called ‘one of the most inhospitable places in the world’. But with the nearly intolerable heat, comes a world unlike any other – salt mines that last for miles, colourful sulphur lakes and (the real reason for my visit) Erte Ale, one of only three permanent lava lakes in the world. James, always interested in seeing an active volcano, wanted to visit and we figured it would be a good way to wrap up our time in Africa before heading to Europe for a few weeks.

As we waited at the Mekele airport for the tour vehicles to arrive, the mix of people was striking; a European family with their 3 year old son (very adventurous!); a large group of Chinese tourists, none of them under the age of 50; a few solo travelers; an Australian couple who I can only assume are famous travel bloggers judging from the beautiful dress and full face of makeup the woman was wearing. Soon enough, we were all jumping into our assigned trucks – separated into smaller groups but never far as the Land Rovers drove single file down the road and we began our journey. 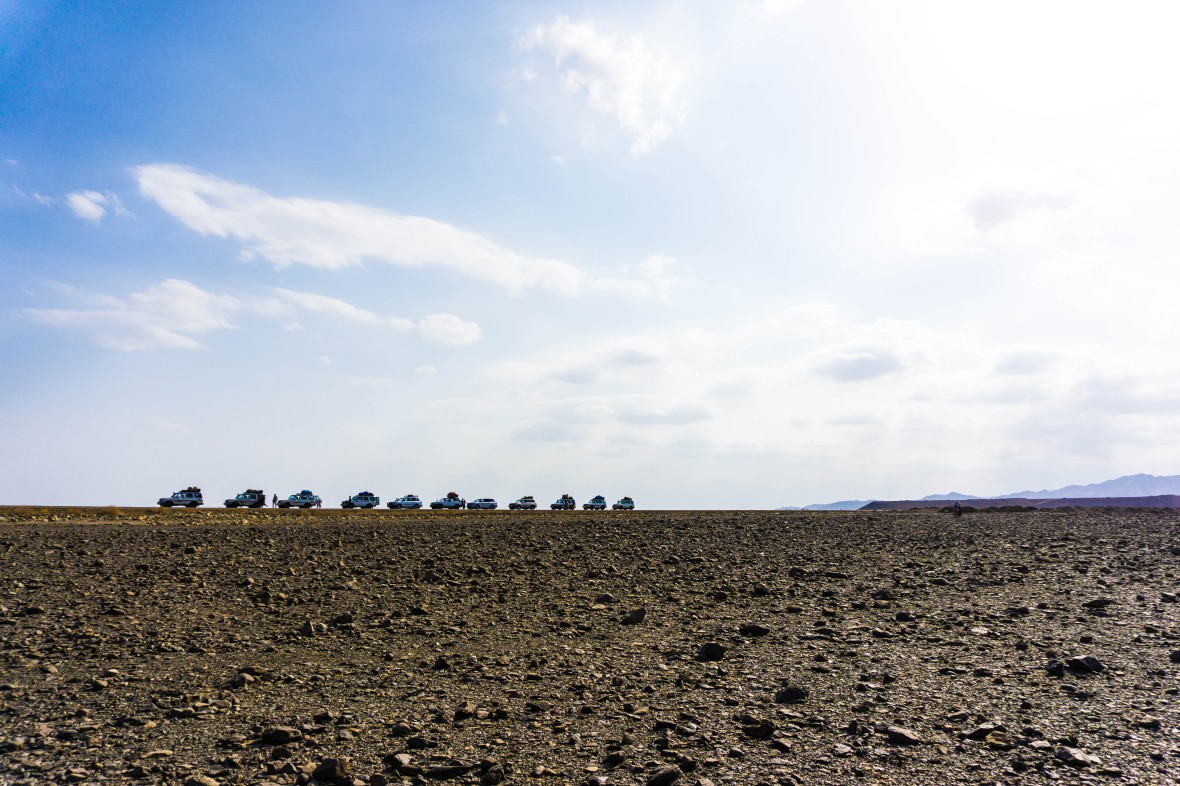 Range Rovers lined up like toy trucks in the Danakil Depression

The drive on the first day is a long one, and there are stops along the way to sample traditional Ethiopian coffee and not-so-traditional “Foreign-gy Food” (which, much to our disappointment, was pasta). But it does give you an opportunity to interact with the locals, particularly the kids did not hesitate to ask me for a pen, or a more-popular item – a football. 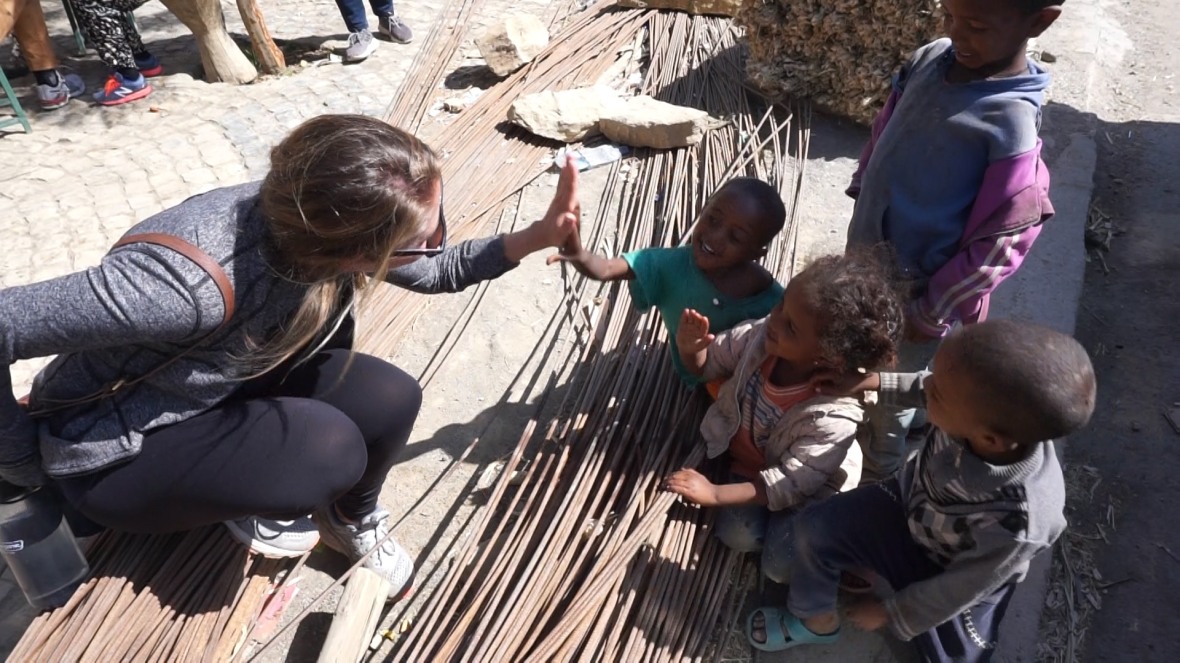 Teaching the local kids how to ‘high five’, which got a lot of smiles and laughs.

When we arrived at “camp” I was slightly taken aback. I’m no princess when it comes to travel but some basic requirements might include a roof over my head (tents included) and a toilet, or at least a private area. We pulled off the main road onto a gravel lot with about 30 wooden beds and no sign of a building anywhere. James and I kind of looked at each other for a second like ‘is this for real?!’. But the older tourists were excitedly picking out their ‘beds’ so we figured we should get in on the action. 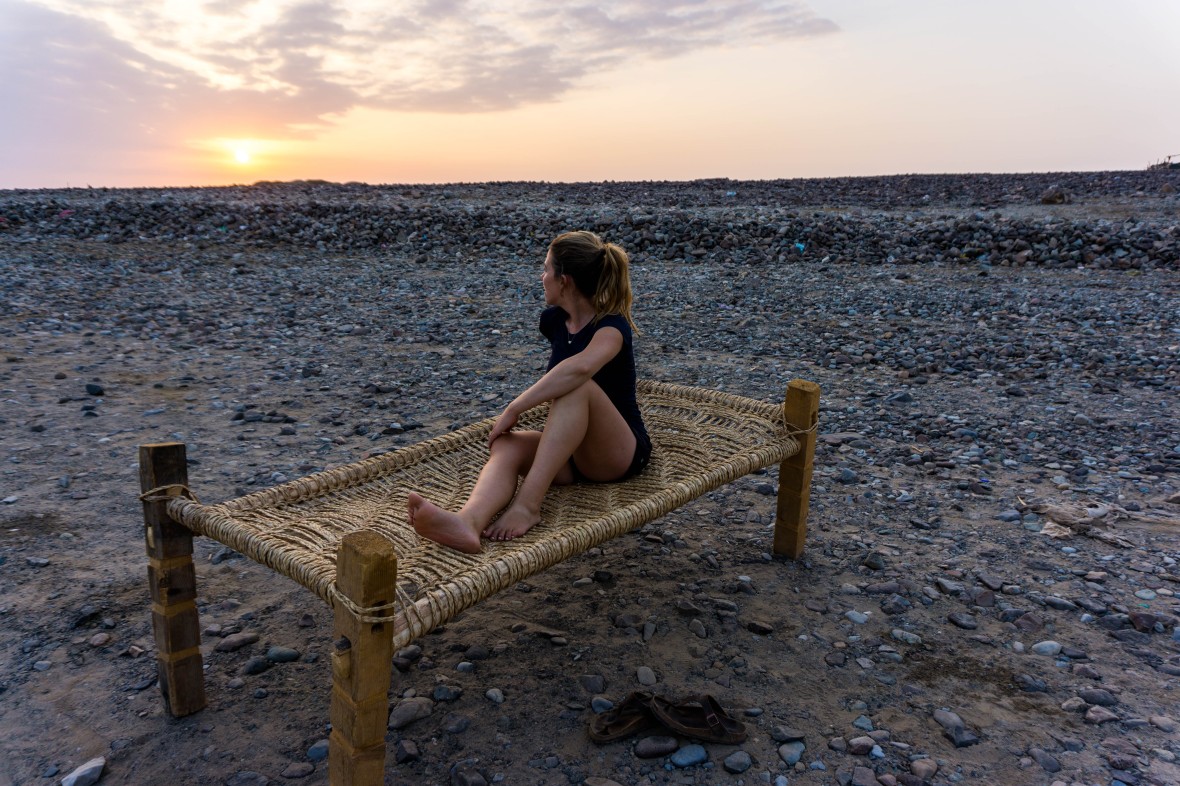 I woke up like this. Literally. See the luxurious “toilet” (aka gravel mound) in the distance.

After selecting beds for the evening, it was time to check out the first attraction of the Afar region – a salt lake near the Asebo Salt Mines which provides incredible views and a chance for reflection.

The evening commenced with our guides giving out cups of local wine with a shot of Ouzo in them – I was secretly hoping it would help knock me out as I was sure the sleep wouldn’t be a restful one. And I was right; I spent more of the night tossing and turning, imagining what kind of bugs or spiders could be crawling all over my body. At one point in the middle of the night I opened my eyes to a squint to see an armed soldier patrolling around our camp. It did nothing to put my mind at ease, but I must have eventually drifted off again.

I’ve never been happier to be jolted awake by the sound of clanging pots and pans at 5am. Phew, we made it through the first night! After eating the fly-covered breakfast as quickly as we could, we were on our way – headed back to Asebo to see the salt mines and infamous camel caravans. These groups of camels carry salt blocks from the depression all the way to Mekele; a distance of over 200kms and a month long return trip. Each camel carries up to 140kgs. The wear and tear on their bodies is evident, and James asked one of the guides if he thought they would ever use more modern modes of transportation, like trucks, for the journey. He smiled, and told us that transporting the salt this way (the same way they’ve been doing for hundreds of years) is good for the community; the owners of the camels earn their living that way, and none of them could ever afford a truck. Additionally, it draws in tourists – and tourism is something Ethiopia is working hard to increase.

One of many camel caravans to be seen in the Asebo Lake region.

Either way, the work of the camels is impressive. And what’s perhaps even more impressive is how these blocks of salt come to be. Miners from the Afar region are using the same methods they’ve been using for centuries which is cutting the salt with an axe, and then putting large sticks underneath to break the pieces apart – typically in groups of 3 or 4.

As we headed back to our own convoy of land rovers, we were briefed on our drive to Askoma, the army camp at the base of Erte Ale – the active volcano we would be visiting. The majority of the drive is on nice paved roads, but the last 3 hours are off-roading through deep sand and over lava rocks – it’s clear why we were in 4x4s and our driver joked that we were getting the ‘African Massage’.

We arrived at Askoma, a military camp at the base of Erte Ale, at dusk. We had a few hours to kill, as the trek up to the top wasn’t set to begin until it was completely dark – sometime around 8pm – to avoid hiking in high temperatures. 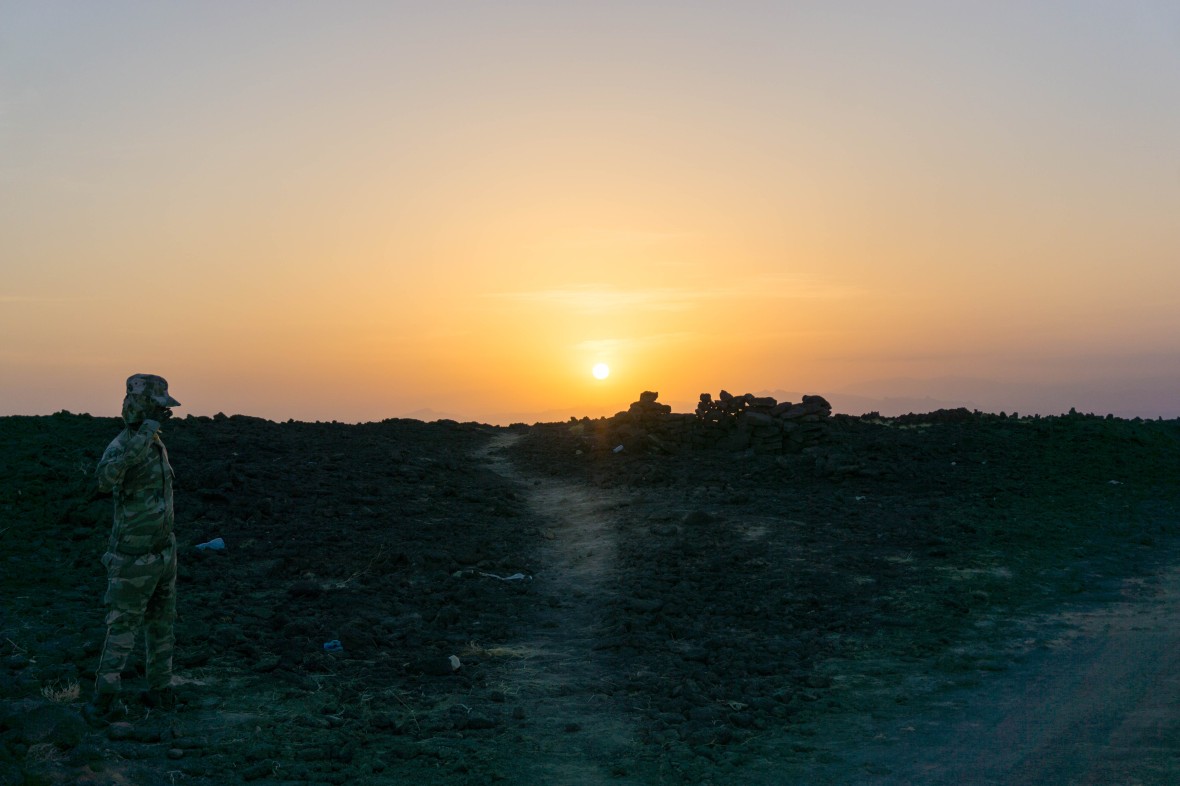 A fake soldier saluting on the road leading to Askoma.

It was hot and dusty. As the wind blew sand and dust around, I put a balaclava over my face to shield my nose and mouth. Since it was so hot I was drinking a ton of water and as I looked around, it dawned on me that the bathroom conditions here were even worse – there didn’t appear to be so much as a mound of rocks around. I should also mention that the camp is heavily guarded with soldiers, so even if I did find a private area I would likely still be in view of a soldier. It seems that I should have checked my humility at Mekele airport before embarking on this journey. I begged James to come with me  to find a ‘quiet’ spot and eventually saw one that looked somewhat shielded from view.

As I was walking back to camp, I stepped down in the sand and felt something soft under my sandal. Shit. Literally. It seems someone else had found the same private spot to do their business. Back at the camp, rinsing my shoe with some of the non-drinking water our driver had in the car, my patience was wearing thin and I was beginning to wonder what the hell I’d gotten myself into.

A girl walked by, waved and asked if we were Canadian (I guess my Toronto Blue Jays hat gave me away). We started chatting about travel in general, Ethiopia and this trip – about how different travelling here was. She asked ‘So I assume you heard what happened last week with the German guy?’ In truth, I had no idea and I think my face said it all because she quickly replied ‘Nevermind, I’ll tell you tomorrow’. ‘Am I right to assume it has something to do with the armed guards that will be going up to the volcano with us?’ ‘Yes’, she said, ‘A German tourist was shot here last week. Just make sure you stay with your group’. Before she could go on, our guides were calling us for dinner. Now I was REALLY wondering what I’d gotten myself into. After nearly 4 months in Africa, I turned to James and said “Ok, I think my ‘adventure meter’ has officially run out.”

Erte Ale is close to the border of Eritrea, a country with which Ethiopia has had border disputes for years including a war between May 1998 and June 2000. In 2012, a group of European tourists was attacked with 5 being killed and 2 being kidnapped, released 2 months later. It’s unclear to me who is responsible, as the Ethiopian Government holds Eritrea accountable while they point the finger at Ethiopian rebels. Since the 2012 attack, armed guards and militia have been a part of the groups making the trek to the lava lake to ensure safety – I was aware of all this. But this newfound information had me feeling nervous to say the least.

As we began the 14km walk to the summit, I soon forgot about the possibility of death. In addition to feeling safer as we passed by groups of Ethiopian soldiers on our way (who were there for our protection) I was beginning to feel fatigued and just getting to the top was the only thing on my mind.

I am happy to say we made it to the top without any issues, though I was starting to wonder when we would get to bed (it was nearly 11:30pm by this time, and the night before wasn’t the most restful sleep). Our guide informed us that we’d be heading down to get a closer look at the lava lake before sleep. We all grabbed some water and continued on our way.

Nothing can prepare you as you climb down to the rim of the crater – the smell, the heat and the toxic smoke being blown into your face had us in coughing fits as we approached. But seeing the lava bubbling through the smoke made it all worth it. 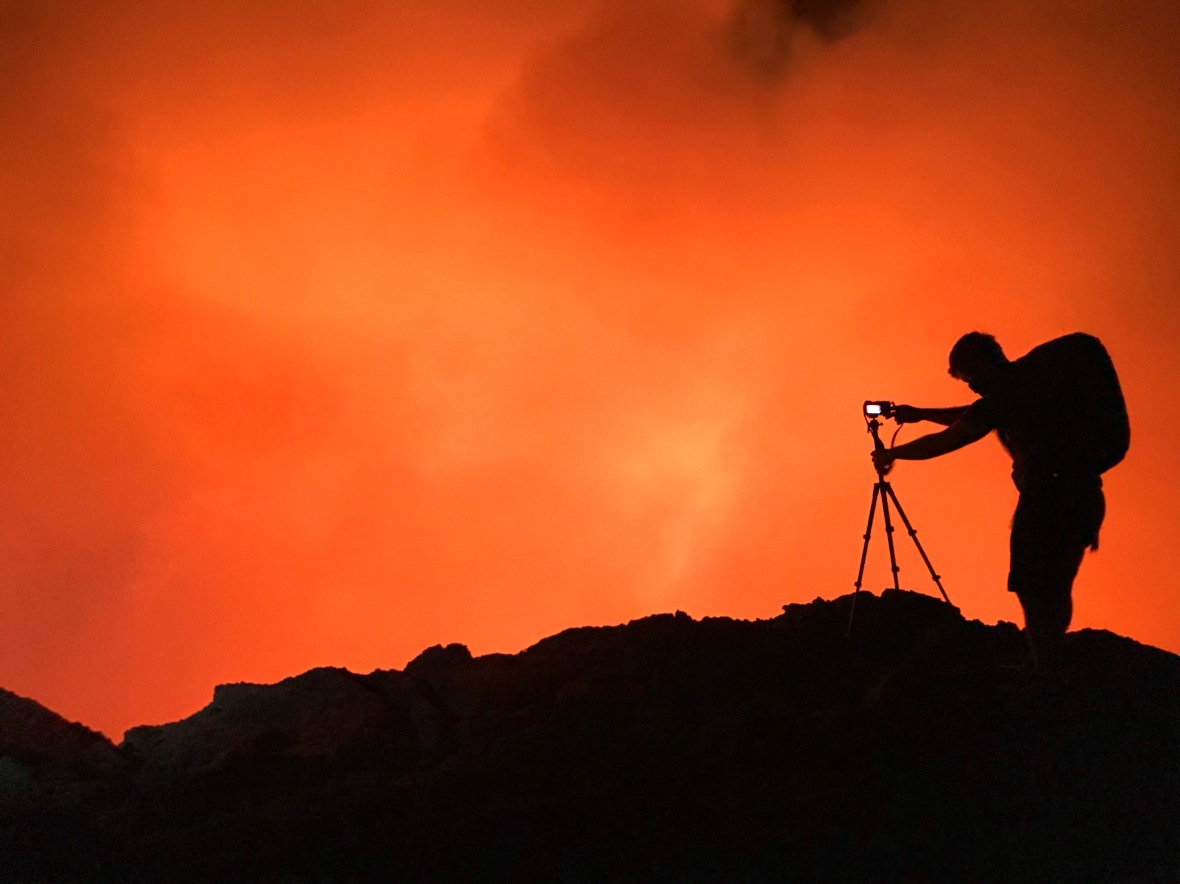 @ministryoftourism trying to get that perfect shot.

We arrived to our ‘camp’ (a few mattresses thrown haphazardly between groups of camels) to get a few hours of sleep before wake up at 4am to see the lake again and head down to camp. The views in the morning were no less spectacular, but I was happy to start the descent – a warm shower, bed and (the thing I was most excited about) a toilet was waiting for me at my Mekele hotel that night. 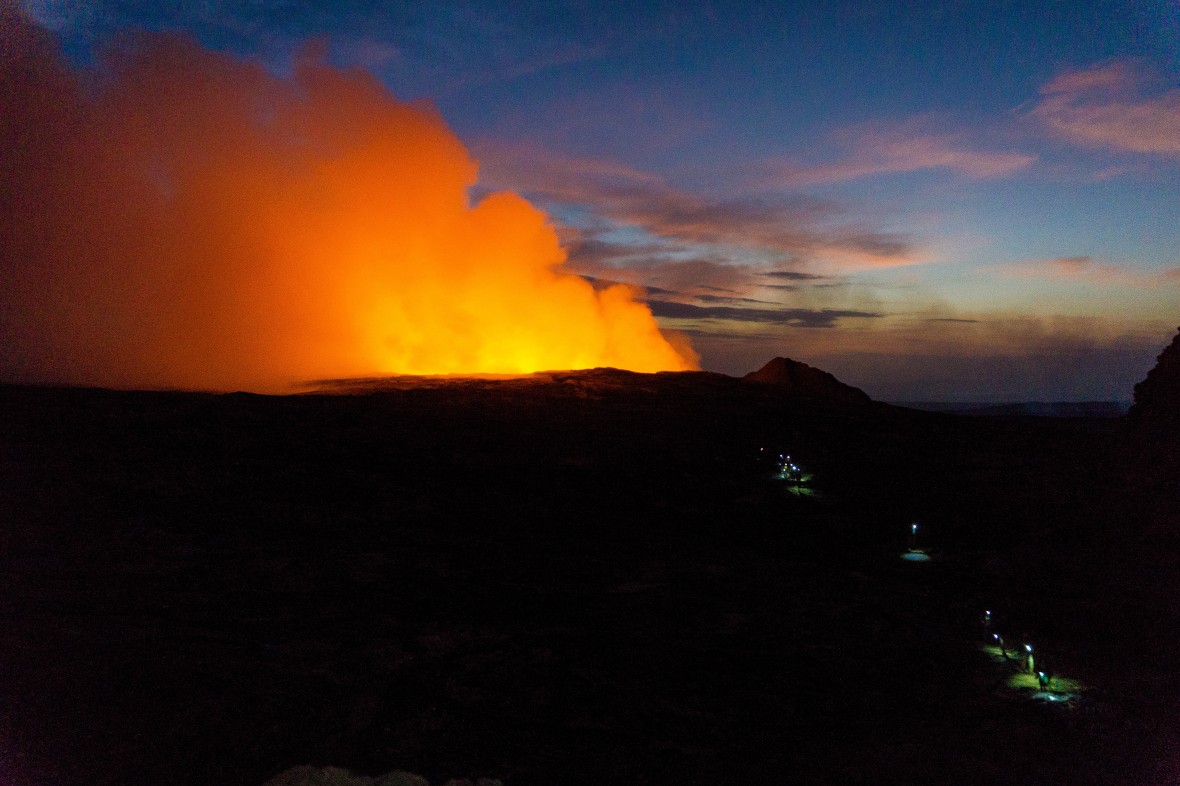 The Danakil Depression is definitely unlike any other part of the world I’ve visited. The journey is just as exciting (albeit nerve-wracking) as the destination. It’s one of the most spectacular (and unpleasant) trips I have ever taken and though I have no ambitions to go back, I think it is something everyone should experience…for 48 hours, before getting back to civilisation.

2 thoughts on “Ethiopia: The Danakil Depression”