After an interesting 2 days exploring the Danakil Depression (if you haven’t already, read about that here), it was time for the next part of our tour. When we signed up at the tour company, our contact there said “I hope you like climbing!”. We had no idea what to expect, particularly since we had chatted with people at Erte Ale who had done the opposite route to ours and mentioned nothing about climbing. Regardless, we were game for pretty much anything.

Our driver came to pick us up from the Atse Yohannes Hotel in Mekele (which ETT, the tour operator we were using, had selected for us) and we began our drive. I should explain that when we booked the tour, we were given very loose instructions on what would happen each day, and so we often found out what was in store for us each morning. The itinerary specified that we would be visiting Erte Ale, flying out of Axum and seeing the churches in Lalibela, but the intricate details were foggy (read: missing). So when our driver mentioned we would be stopping in Tigray to climb up to some mountain churches, we were surprised but equally excited!

As we came into the small town, we picked up a local guide who would be coming up the mountains with us. Without introduction he simply asked “Will you be requiring the ropes & harness for the rock climbing?” I’m sorry, what?! James and I stared blankly at each other before I shrugged and asked if we could decide when we got there. The ropes cost about $15 per person – an outrageous amount that the guides use solely to supplement their income. He agreed and we drove toward the base of the Gheralta Mountains. He pointed to a small dip in the mountain range and informed us that the church was located there, and we should begin our journey. He pointed to the mountain to the left of us and said we would be climbing that one after lunch. I was regretting my clothing choice that morning (jeans) but pressed on.

After 40 minutes of walking up a steep and rocky path, we came to a flat rock surface, where several people were rock climbing. The climb was not super high, but I was shaky enough that I opted for the rope; it didn’t do much but offered some extra assurance I wouldn’t slip and fall. James went up without the rope and had no problem, but he’s a bit like a monkey when it comes to climbing. The guides are there to help you, even if that means giving you a good boost when you need it (I didn’t even notice the guy under me trying to figure out the best way to push me up without making me feel uncomfortable!) A good source of motivation was the four year old boy travelling with his parents (who were also on the Danakil Depression tour with us) who was literally being airlifted by two guides and barely making a peep!

We were finally at the top, but still had to cross one more hurdle before seeing the beautiful Abuna Yemata Guh – walking across a ledge with a 200m drop. For some reason, this part of the climb didn’t phase me at all, yet you’ll notice how shaky I was during the rock climb. Regardless, it was entirely worth it when we entered the infamous church from the 6th century.

You may wonder why anyone would build a church that’s so inaccessible? Though there is still little known about these churches today, the oral history (which our guide shared with us) is that they were build in such precarious locations to remain hidden from Muslim armies who were destroying Catholic churches at the time.

The paintings inside (which we were told are from the 12th century) are in impeccable shape; unlike any we have seen in other parts of the world. There is also a 1500 year old goatskin bible which a priest will show you if you’re lucky (be ready to make a monetary contribution to him and any other priest or nun you happen to meet along your journey).

This church is still active; on Sundays local villagers from the Gheralta region will make this climb (without harnesses 😉 ) for their weekly service. 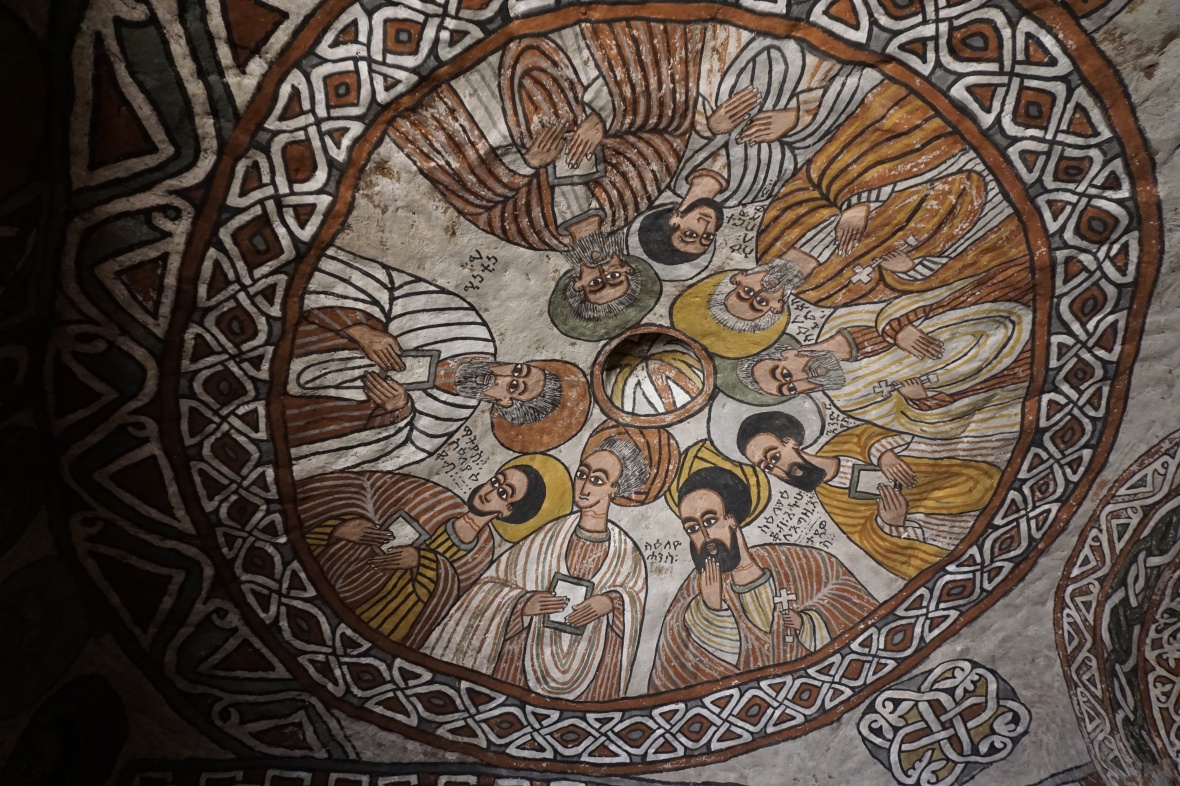 After a few minutes walking around, we were ushered back outside to begin our descent, which was a lot easier (though I still opted to use the rope and harness!). We headed to town for a quick lunch before returning back to the mountain range and beginning our ascent to Maryam Korkor and Daniel Korkor. We were happy to have a guide for this one as well – though the walk isn’t as challenging, it would be very difficult to navigate on your own! In addition to your guide, you also go up with a local scout and give them a donation at the end of the trip (based on how much help you required). Though you don’t need a harness, the climb is still quite technical and there are parts where you are scaling large boulders.

After climbing through a valley, we came to an opening with extraordinary views. I couldn’t get over how scenic Tigray was – a place that I was completely unaware of until that morning. We continued our climb and after another half hour we were at the top. We passed through a white gate and were greeted by a nun who showed us the entrance to the church. It was a bit surprising; it looked a little like a regular house from the outside built into a cliff. Our guide pointed out that there were two entrances – one for males and one for females so we parted ways for the 2 seconds it took to enter the church. Once inside, we marveled at the artwork before our guide told us it was time to see Daniel Korkor.

We walked around the corner and were once again confronted with a ledge – this one a little wider than Abuna Yemata. We came to a small locked door in the side of the mountain; I couldn’t help but think of a hobbit hole. The priest unlocked the door and we crouched to get through (James more so than me) and inside the tiny church. The paintings are quite different from the other two, though the stories are the same. Before we made our descent down, James took out his drone to capture a few images (much to the excitement of our guide, a priest and the local boy climbing with us!). 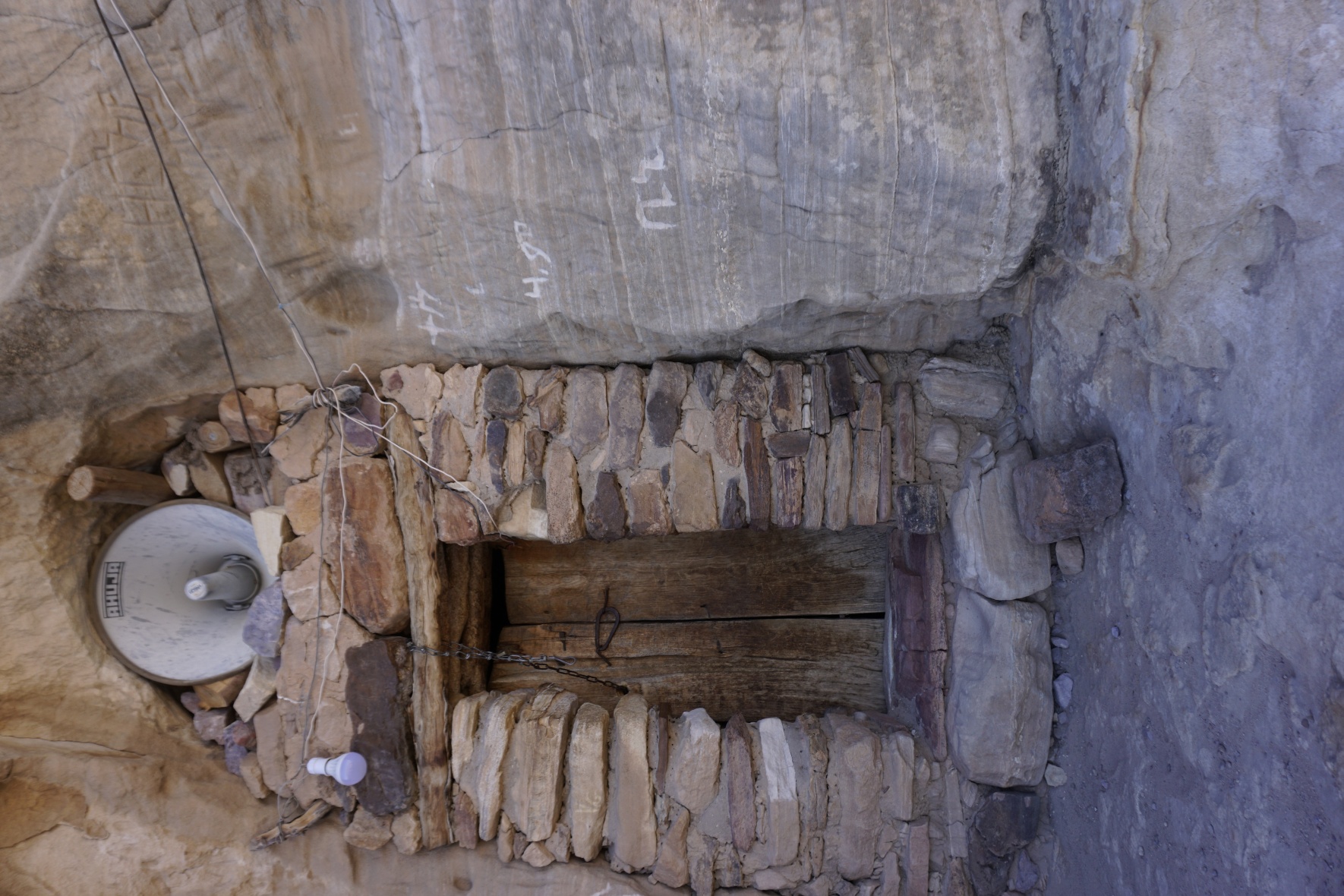 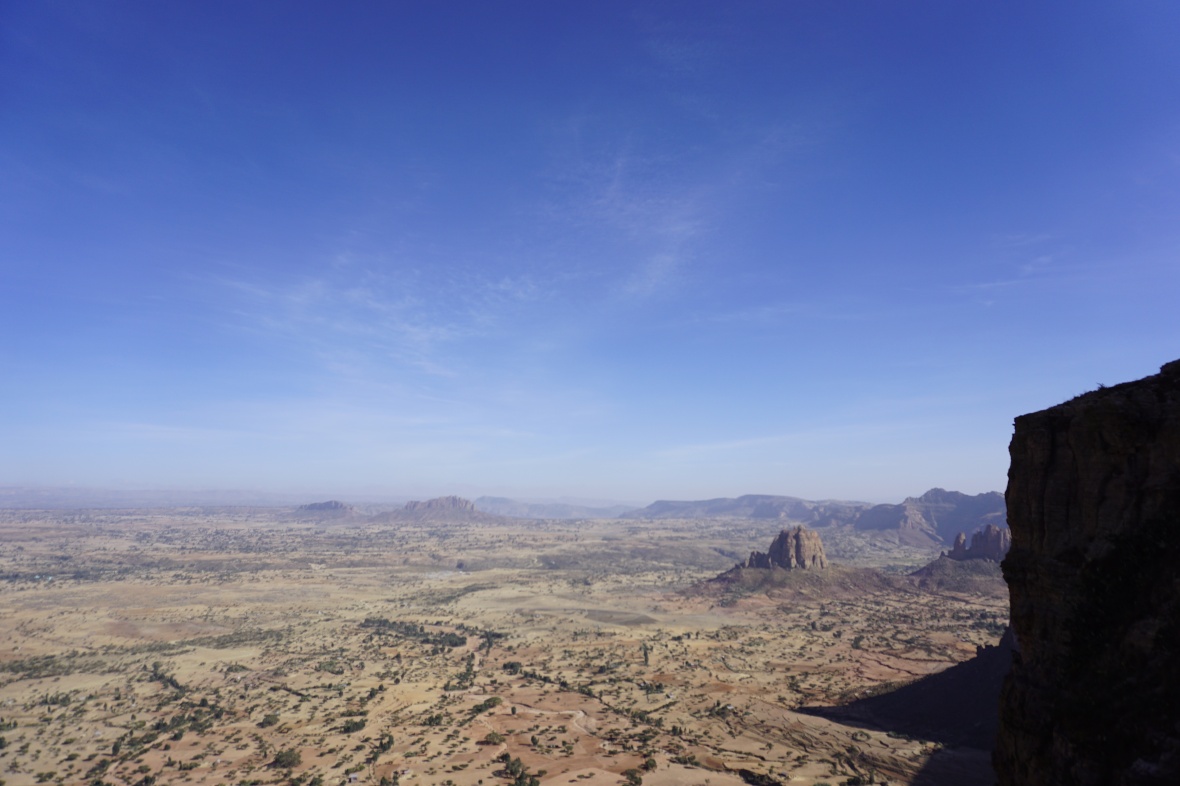 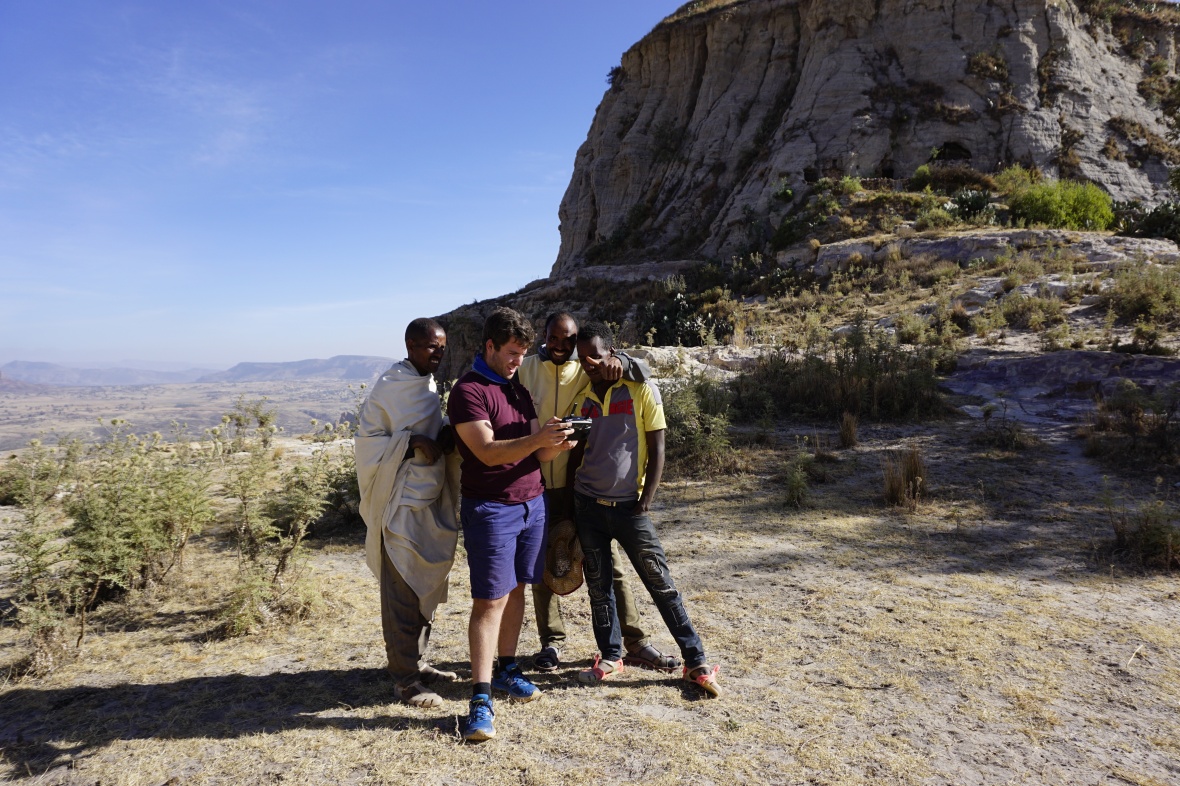 It was late afternoon by this point and we were beat; as we drove through the countryside toward Axum we both nodded off once or twice. The combination of the heat and a few intense climbs definitely got the better of us.

We arrived in Axum after dark and ate at the hotel before falling into bed. We had an early start the next day touring the sights in Axum. I won’t dwell on Axum – for us it was a necessary stop because we were flying from there to Lalibela. But we completed the tour with our guide in under two hours the next morning and if you had to cut one thing out, I’d suggest that.

Our driver said goodbye and dropped us at the airport to catch our early afternoon flight to Lalibela. As we were going through security, James’ bag was pulled aside and within minutes they had confiscated our drone. The thing about Ethiopia (as with much of Africa) is that rules change more frequently than the weather and there is often no rhyme or reason (we are still writing up our ‘things to know before visiting Ethiopia post!). Unlike other areas of Africa, however, politely chatting or offering to “pay a fee” to get out of a difficult situation doesn’t fly. After much discussion, it was clear the drone was not coming with us to Lalibela and we were told we could pick it up when we flew back to Addis Ababa at the end of the week (spoiler alert – we did get it back after spending a good 5 hours at the airport trying to track down the right people, and finally being told that we would have to come back the day of our flight to collect it). In any case, we were a bit grumpy but figured there wasn’t much to be done so onwards and upwards it was.

We were met by another guide upon arrival (also arranged through ETT)  who dropped us off at our hotel to have some lunch and relax a bit before we began touring the rock-cut churches, which I was looking forward to the most! We had met a guy in Kenya who told us he found them more impressive than Petra so I had big expectations.

The 11 churches are divided into two main sections; 5 north of the river Jordan, 5 south of the River Jordan and the last and most famous church (House of St. George) stands on its own.

It’s pretty incredible walking through and around these structures and trying to comprehend the years of work that went into chiseling the rock into not only the churches, but tunnels and walkways between them.  These churches, the largest monolithic temples in the world, were ‘constructed’ beginning in the 12th century under the reign of King Lalibela who set out to construct a “New Jeruselem” – the last church (St. George) being completed in the 16th century.

We toured all the churches over 2 days, the north group the day we arrived and the remainder the next morning. 4-5 hours is plenty of time to see these temples in all their glory. During our walking tour on the second day, we arrived at the House of Angels Gabriel and Raphael and were treated to a performance of chanting by the priests. 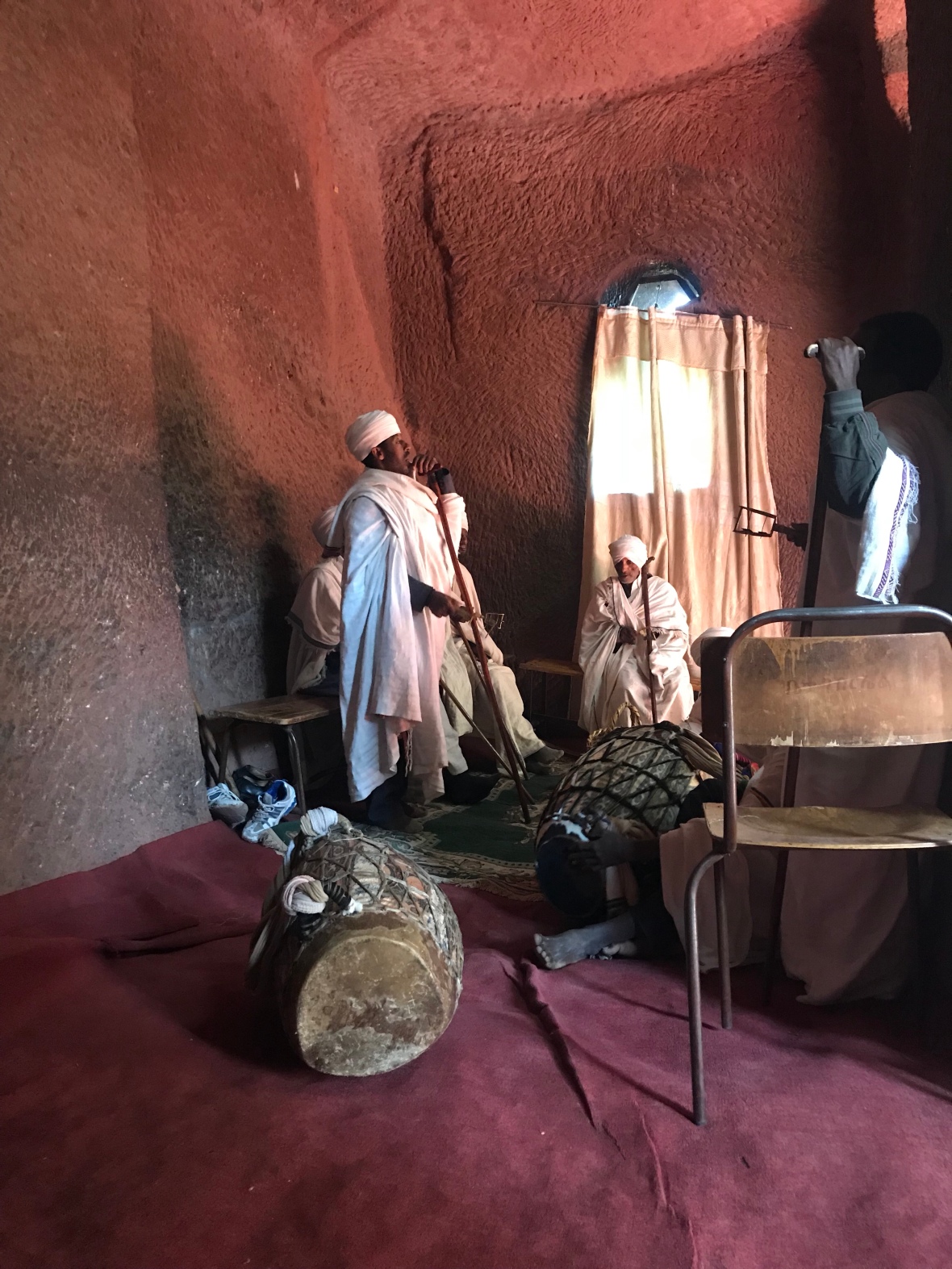 Of this block of churches, Gabriel and Raphael was my favourite, made all the more special by our arrival through a small and narrow tunnel in complete silence.

Finally, it was time to see St. George! And it was just as impressive, if not more, than we expected. The thing that really struck me is that here we were, sitting in front of what is arguably the most famous church on the continent and one of the most famous in the world and James and I were the only tourists around. This was definitely one of the biggest draws of Ethiopia. It’s not the easiest place to visit (more on that to come in a later post), nor is it the most accessible (not all would be willing to rock climb to see an ancient piece of history) but it’s untouched beauty defines it, making it so different from other places we’ve visited. 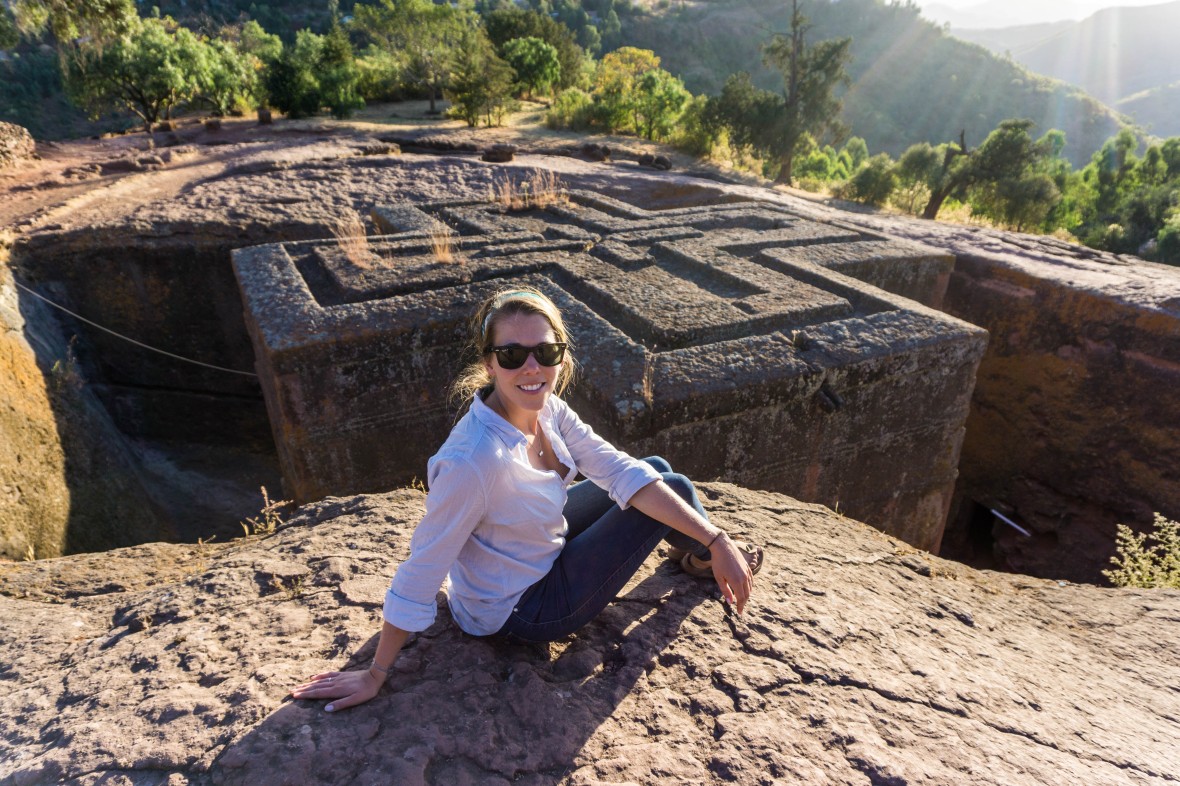 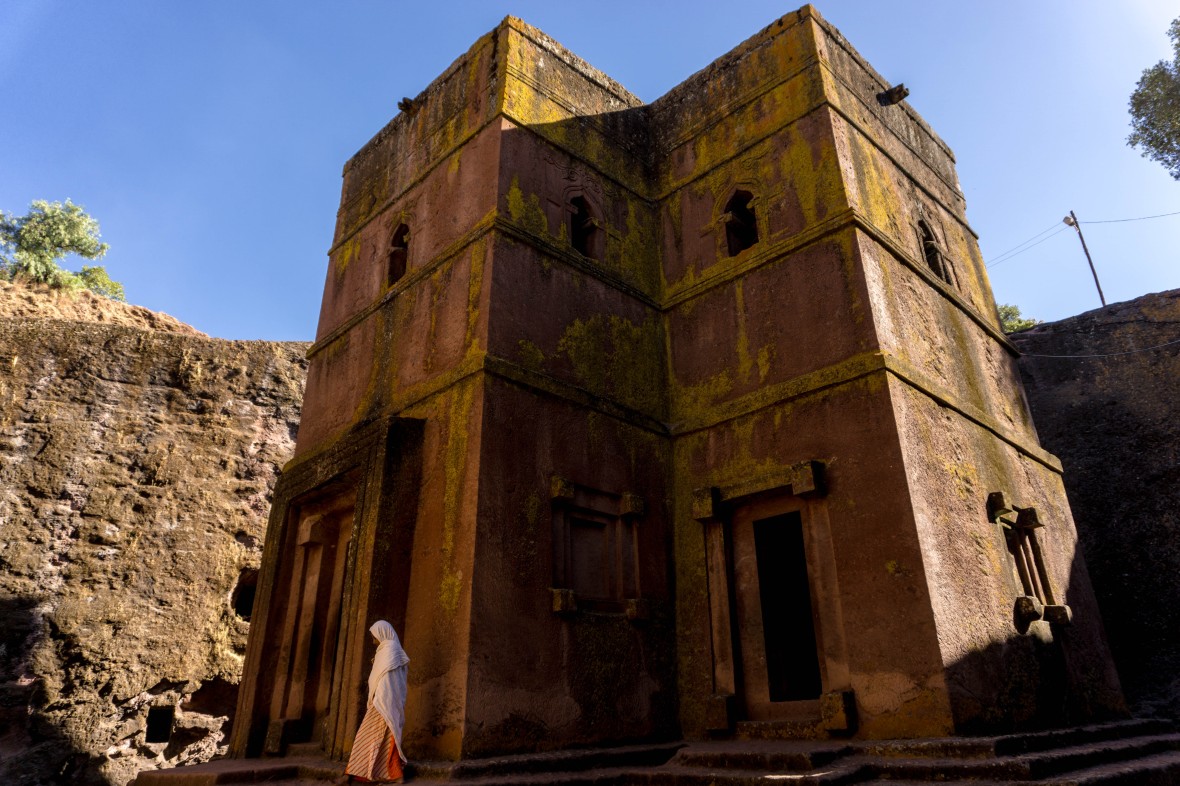 After a sunset dinner at Ben Abeba (believe the hype – the food is great and the views are outstanding) and one last coffee ceremony from one of the many local vendors, it was time to head back to Addis Ababa for one final night before leaving the continent (hopefully with our drone!). 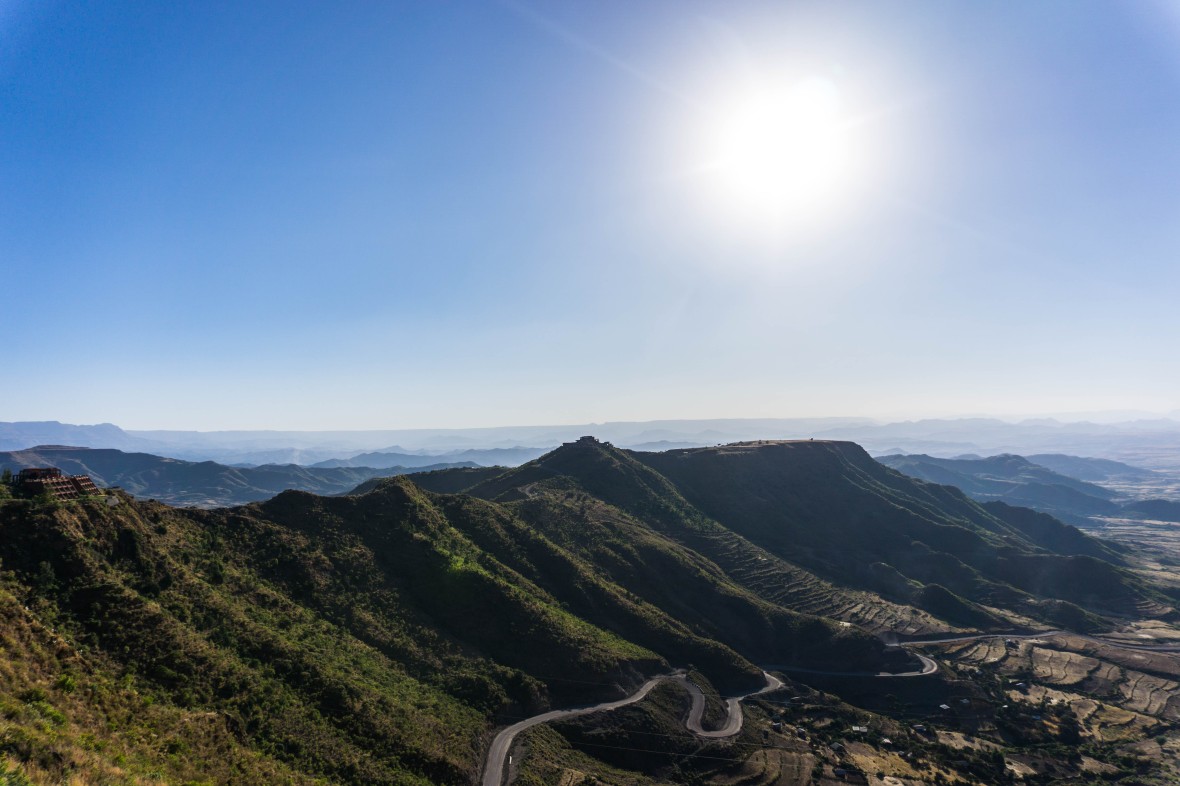 Are you interested in travelling to Ethiopia to see the rock-hewn churches? Or to visit Erte Ale and the Danakil Depression? Get in touch and I’ll happily answer any questions or share any information that might be helpful 🙂

One thought on “Ethiopia: The Churches of Tigray, Axum & Lalibela”